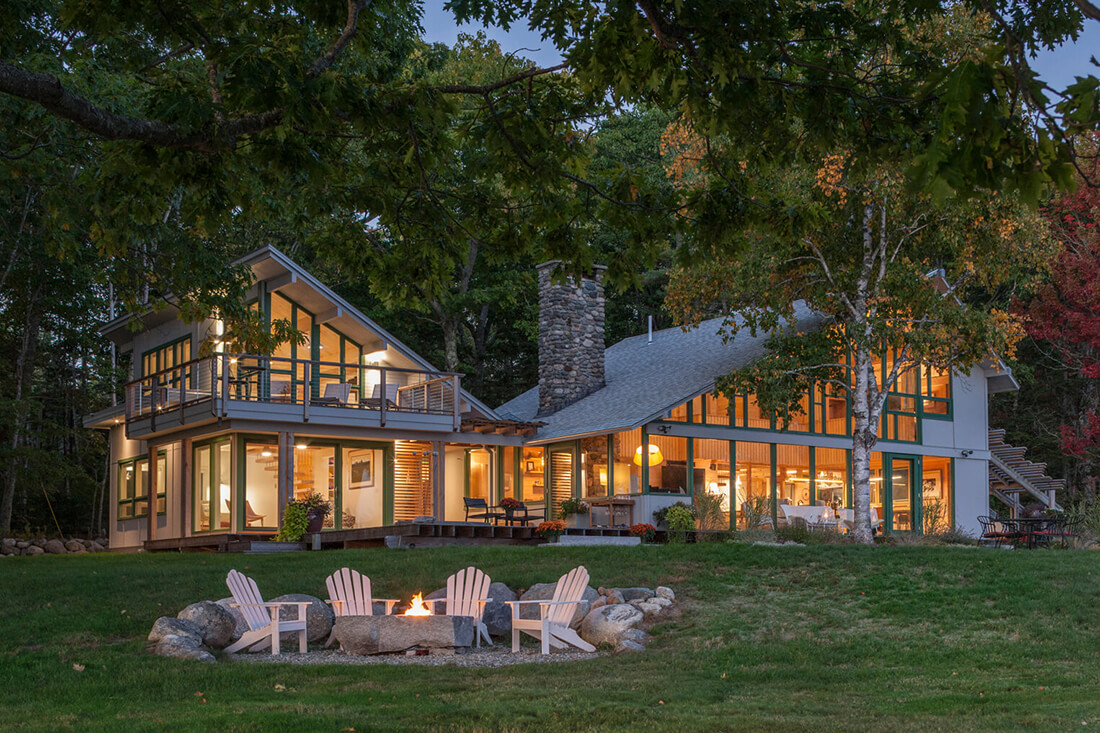 Preserving a Plywood Home 75 Feet from the Atlantic Ocean

Architect Cooper Milliken was an M.I.T.-trained architect who learned precision and order working in the aircraft industry during WWII. Rigid organization, detailed glazing and structure expressed through every inch of a house were Milliken’s calling cards—and he was responsible for the cutting-edge design of several shorefront lots in the mid-sixties, at the height of camp culture in Maine.

One of these homes, dubbed “Oak Point,” sits just 75 feet from the Atlantic Ocean, with a diminutive original floor plan of 1,800 square feet. A lack of insulation, coupled with single-paned glazing and no interior heat source meant the owners had to vacate the property each fall when a layer of ice took residence in the toilets. 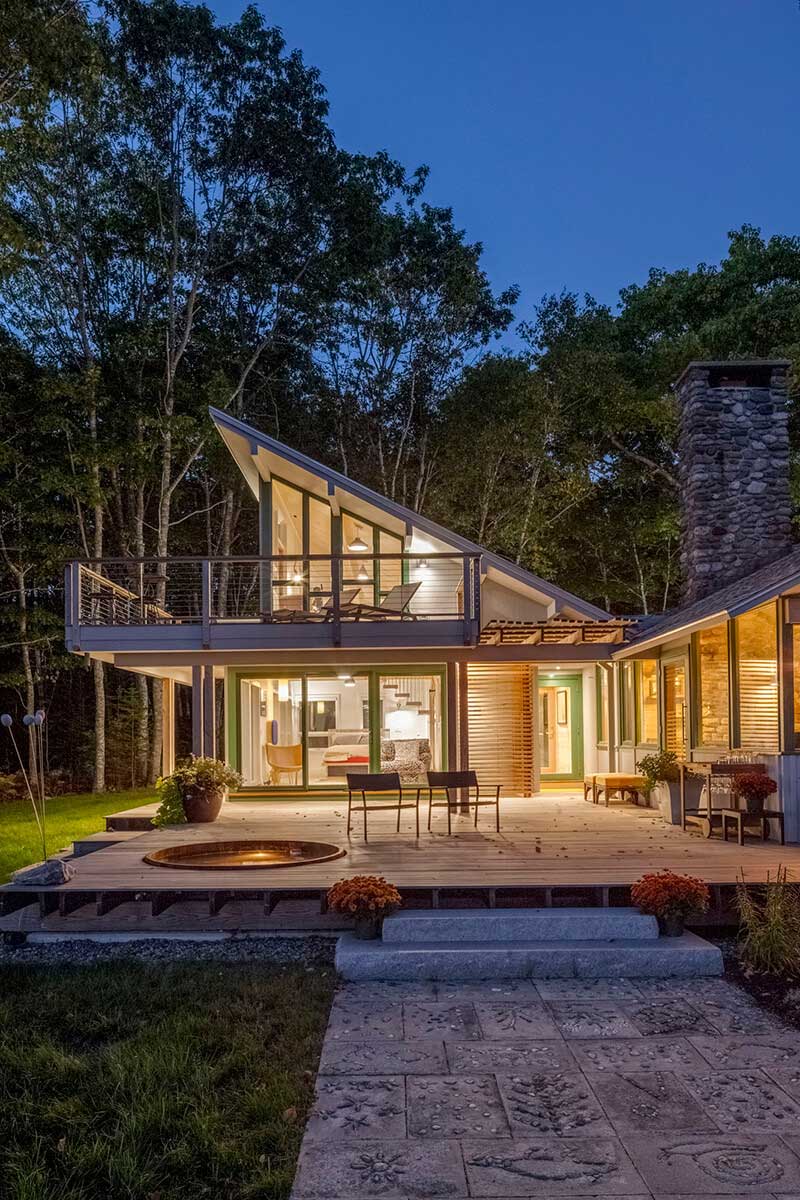 The layout of the structure—from the floor to the columns, to the roof and carrying members—were all organized on a four foot grid system with 48 inch centers, meaning that regulating lines carried through the entire structure and established strict parameters for organization—a product as much of Milliken’s preferences as the dimensional standards of lumber being produced at the time. The entire shorefront dwelling, inside and out, is clad in fir plywood in 4 foot by 8 foot dimensions—falling perfectly into a grid with little remnant pieces. This precision was not an accident, and the home’s exacting construction offered both challenges and opportunities when it came time to bring the design into the 21st century.

“We didn’t have that white canvas that so often you have with schematic design,” said William Hanley, principal at WMH Architects, the firm tasked with reimagining Oak Point for a new generation. “Once we understood how the house was organized, it guided our expectations.”

The son of the original owner approached architects Hanley and partner Heli Mesiniemi with a tall order.

“The owner sat us down and passionately described the intense, emotional connection the family has with the home,” said Mesiniemi. “Their handprints are stamped in the patio concrete pavers. Their roots run deep here. It was far more than a discussion about architecture.”

With generations of memories and dozens of summers spent in this home, the home’s new owner wanted to expand and reimagine this minimalist dwelling into an all-season coastal getaway that still honored the character and originality of the home—including its surprising all-plywood construction. Continuity was key, so the form, look and structural changes had to honor Milliken’s original intent.

“The owner conveyed to us he didn’t want anything between him and the view. You can stand in the kitchen and you see uninterrupted out to the west,” said Hanley. “You walk up the stairs—you see through the stairs to the view. The house has this wonderful transparency to it.” 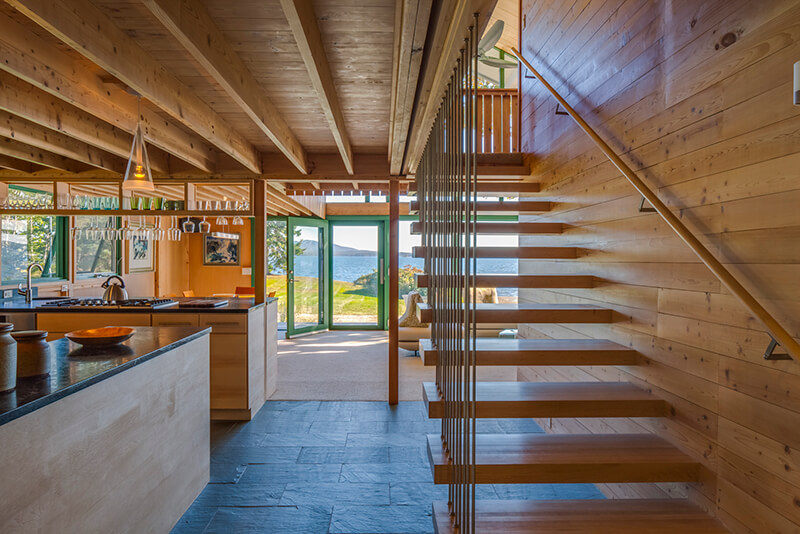 In order to make Oak Point a seasonal home, the exterior shell needed reinforcement that wouldn’t interfere aesthetically. Rain screens were installed and the fiber cement was re-sheathed. An extra layer of plywood sheathing was introduced in the interior, essentially developing a sandwiched wall construction, and the single-paned, 55-year-old glazing had to be addressed. Where possible, the glass was reglazed or resealed, new jambs were installed and custom-designed Marvin Casements were added and organized with the same proportions and considerations of the original glazed window wall.

The original structure and the subsequent updates are reminiscent of the “deck house” style—a type of mid-century modern architecture made famous by architect Richard Neutra—characterized by post and beam structure, cedar tongue and groove planks on the ceiling, and careful planning of long horizontal bands of windows and sliding glass doors.

“There’s everything in it. We had to put new doors into it and then flank the sides of the windows with custom Marvin wood single pane units,” said Hanley. “That’s the continuity that the owner was talking about—that we weren’t going to come in and wipe the slate clean.” 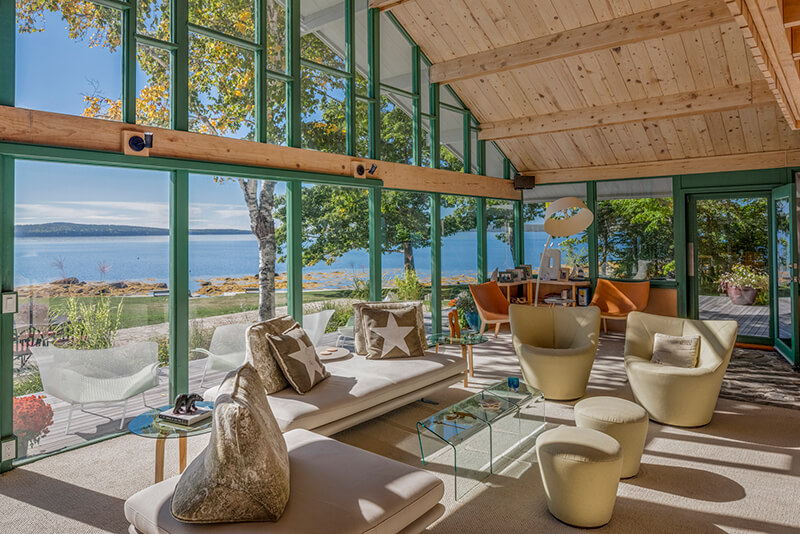 Beyond restructuring in the original dwelling, the owner opted for a fully modernized addition that would leave them snug even in the depths of a Maine winter. The floor in the addition has radiant-heated concrete, spray foam insulation and energy efficient, hurricane-rated Marvin windows and doors. True to the spirit of the original unit, all of the wood in the addition is locally sourced—using native Maine Ash hardwood and a Douglas Fir deck with a stainless steel cable rail system to create an unimpeded view through the panoramic windows all the way to the ocean. 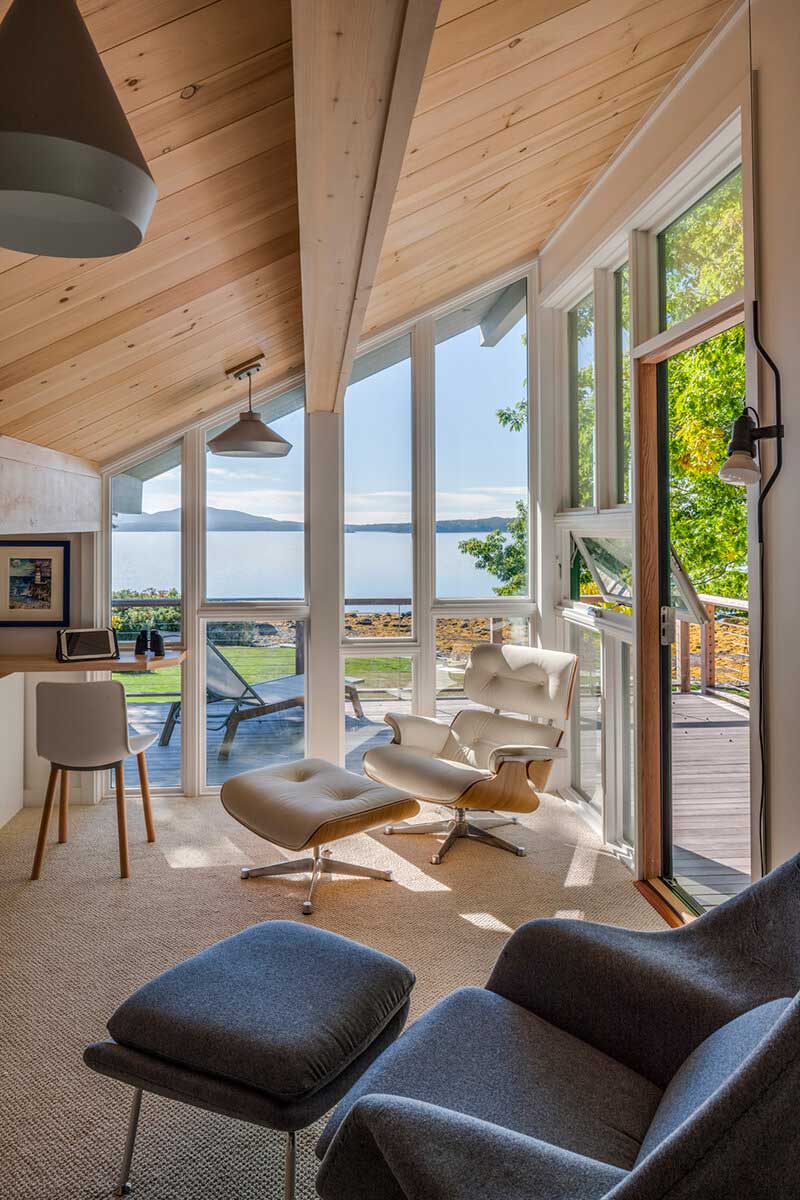 Now that the home has been refreshed and retooled to allow its unique plywood construction to support its second generation homeowners, the question is—would Cooper Milliken, the dedicated architect who camped out on the job site and lived in it during construction, approve?

“I knew how intimately Cooper was involved in his projects. The structure is exposed and organized, and it’s honest and simple in its expression,” said Hanley. “I believe he would feel very respected with the continuity of his original vision.”

Oak Point was named the “Best in Show” winner in the 2017 Marvin Architects Challenge. All photography by Brian Vanden Brink.