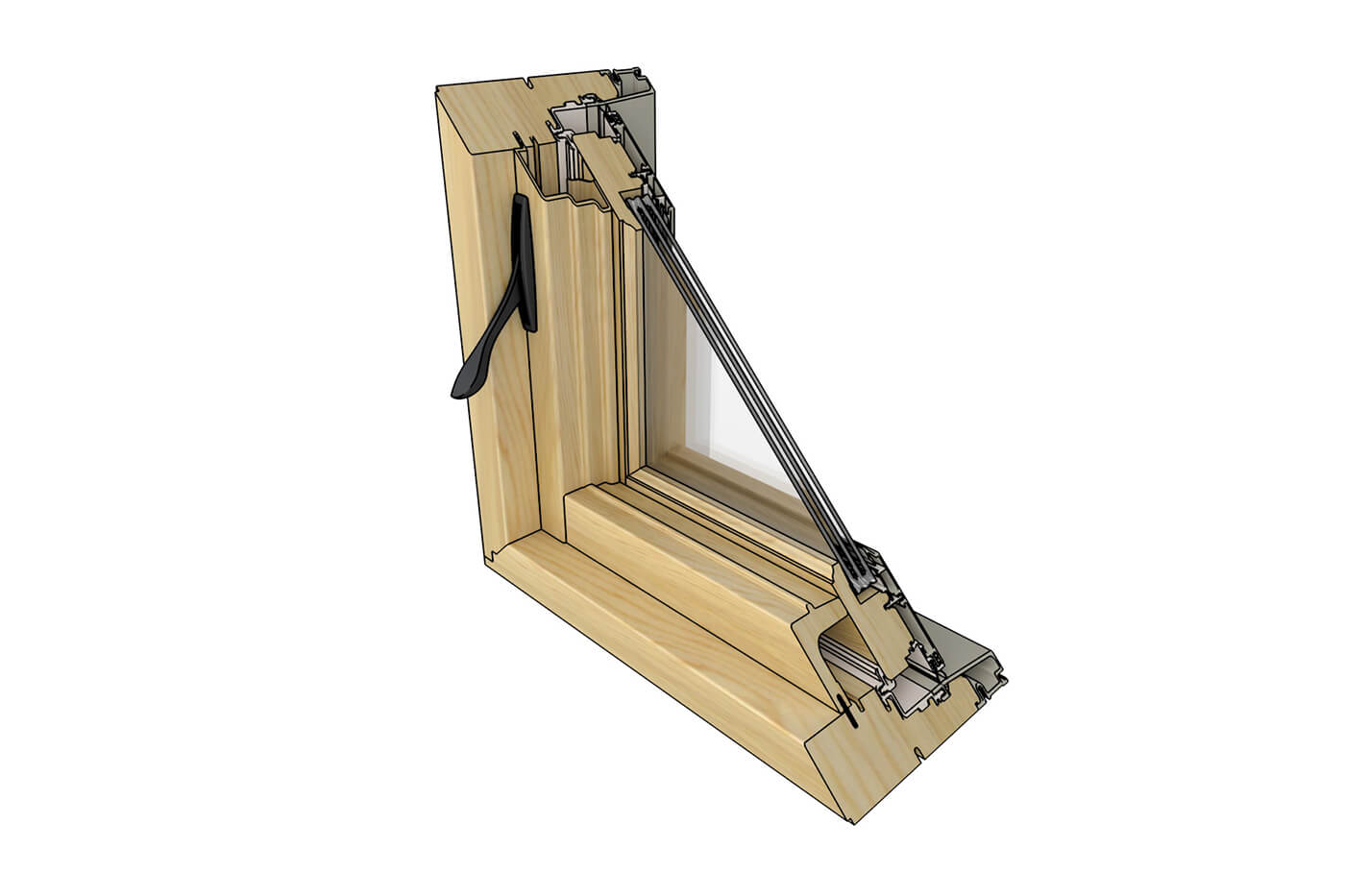 Window Parts: Learn About the Anatomy of a Window

Are you shopping for new windows, or is there a window in your home that needs repairing? This comprehensive window parts glossary is a great place to start.


Replacing the tired, leaky windows in your home with highly efficient Marvin windows can reduce your energy bills and bring more comfort to your favorite spaces. New Marvin windows can be designed to perfectly complement your home’s current architectural style or enhance an ambitious design transformation. To help you on your window buying or repair journey, here is a helpful guide that describes the various window components and explains their functions. 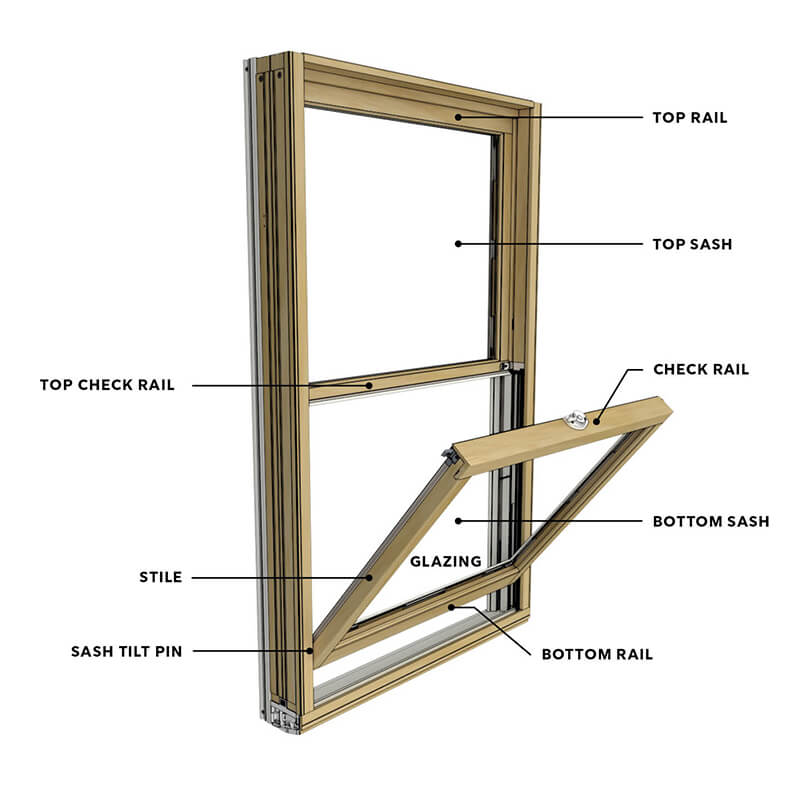 Glazing is just another word for the glass in a door or window. The glazing in modern windows is made up of at least two layers of glass and sometimes three. Inert gas, usually argon, is injected between the glass layers to provide additional insulation. Nearly invisible coatings are added to glass to help manage the amount of light and heat conducted through a window or reflected away from it. Glazing can be enhanced with tints and laminations in order to add privacy, provide decorative options, and increase strength. Find out more about glazing.

The daylight opening (DLO) refers to the total amount of glass in a window not including the sash stiles and rails or the window frame.

The part of the window that holds the glass and opens and closes is called the sash. Window sashes and frames can be made out of several different kinds of materials including wood, aluminum, fiberglass, composite, and vinyl.

Stiles are the vertical components of a sash.

Rails are the horizontal components of a sash. The two rails that meet in the middle of double hung and single hung windows are called check rails.

A storm sash is a separate sash constructed of very small stiles and rails. Storm sashes are not typically installed in the factory but are added to existing windows, usually single-pane windows, to help improve energy efficiency and comfort levels, especially during the cold winter months. Some storm sashes open and close while others are stationary, and they may be removed seasonally or left in place year-round. The use of storm sashes is not necessary on modern, highly efficient windows (Not Shown)

Some picture, or non-operating windows have no sash at all. These are called direct glazed windows. The glass on a direct glazed window is secured directly into the frame. The absence of stiles and rails creates a larger daylight opening and unobstructed view. The narrow and sleek aesthetic of direct glazed windows makes them more popular with modern architectural styles and in commercial applications (Not shown).

The mechanism that allows sashes on double hung and single hung windows to tilt in for easy cleaning is called the sash tilt pin or sometimes referred to as a cam pivot. 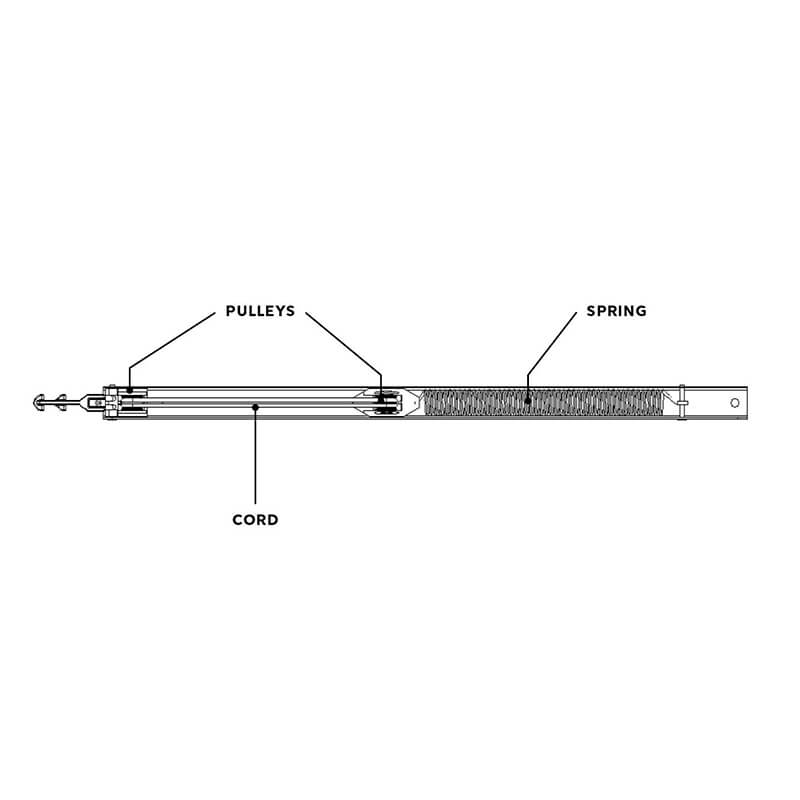 Window balances are the mechanisms in a single hung or double hung window that counter-balance the sashes, making the sashes easier to lift open and preventing them from slamming shut. Balances are located on either side of a window and are hidden from view inside the side jambs. Years ago, weight and pulley balances were most common. These simple devices were constructed by attaching a cord to a lead weight, and then looping the cord over a pully and attaching the window sash to the other end. Modern block and tackle balances operate on a similar principle, but the tension is supplied by springs instead of weights. Marvin offers the latest in balance technology to allow even the largest sashes to operate smoothly. 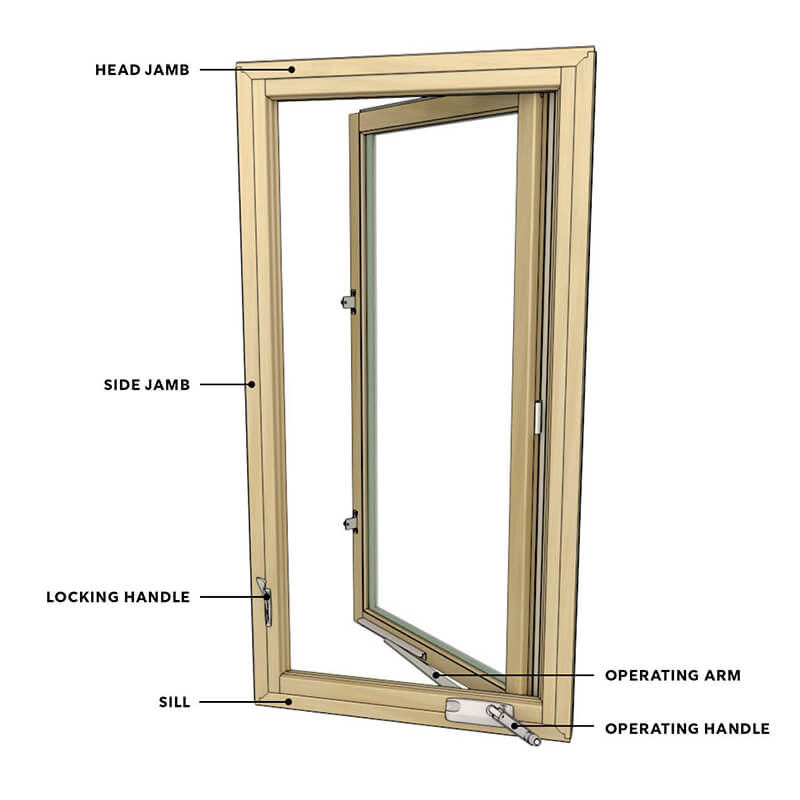 The head jamb is the top component of the frame.

Side jambs are the vertical components of the frame.

The sill is the bottom component of the frame. The outside edge of the exterior portion of a window sill is tapered down to help shed water.

Jamb liners span the distance and cover the space between the window frame and the finished interior wall. Jamb liners are typically made of wood and can be installed at the factory or on site. Plaster or drywall is sometimes applied directly up to the window frame, which eliminates the need for jamb liners (Not shown).

Jamb extensions are thin strips of wood installed to the edge of a jamb liner in those cases when the jamb liner is not quite wide enough to line up with the finished surface of the wall (Not Shown).

The operating handle on a casement or awning window is the mechanism used to open and close the sash. The type of operating handle shown here is called a crank handle. Turning the crank in one direction extends the operating arm and opens the sash, and turning the crank in the other direction retracts the arm and closes the sash. This handle folds down when not in use. Some casement, awning, hopper, and tilt-turn windows have non-crank handles used to simply push the window open and close it manually.

An operating arm is attached to both the window frame and the sash on casement, awning, and hopper windows. It is the mechanism that works in conjunction with an operating handle to open and close a sash. It also holds a sash in position when open.

The handle or lever operated lock found on a variety of window types is called the locking handle. When pushed closed, locking handles are designed to pull the two sashes tight together for improved security and energy efficiency. 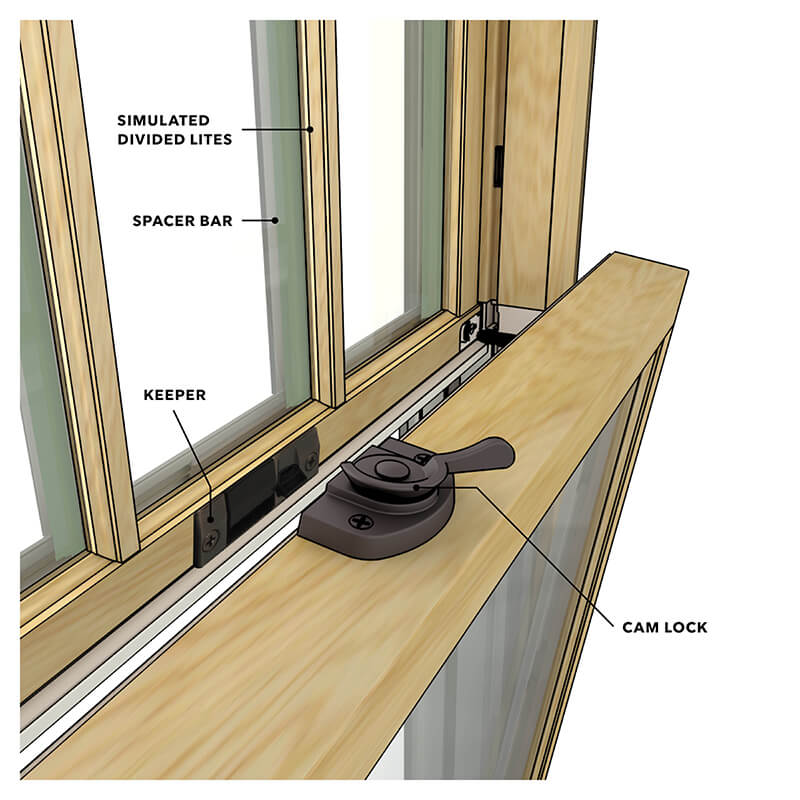 A cam lock is a rotating type lock found on a variety of window types. When turned closed, cam locks are designed to pull the two sashes tight together for improved security and energy efficiency. Lift Lock is a modern alternative to the traditional cam locking system for double hung and single hung windows.

A keeper is the stationary half of a cam lock.

Up until the middle of the 19th century, large panes of glass were fragile and expensive to create, so muntin bars were joined together in order to create large expanses of glass from smaller individual panes. When historical accuracy is important, windows can still be made with muntin bars or sometime referred to as authentic divided lite (ADL) (Not shown).

Because large panes of glass are now stronger, less expensive to manufacture, and more energy efficient, muntin bars have largely been replaced with Simulated Divided Lite bars (SDL), which rest on the surface of the glass.

Spacer bars can be installed between two pieces of glass at the same location as the simulated divided light bars. Spacer bars help to replicate the look and feel of authentic divided lite.

Grilles are bars that create the effect of divided lites but are removable for easy glass cleaning. Grilles-Between-the-Glass (GBG) are also available. As the name suggests, GBGs are decorative bars that are permanently installed between the glass panes for easy cleaning and low maintenance (Not shown). 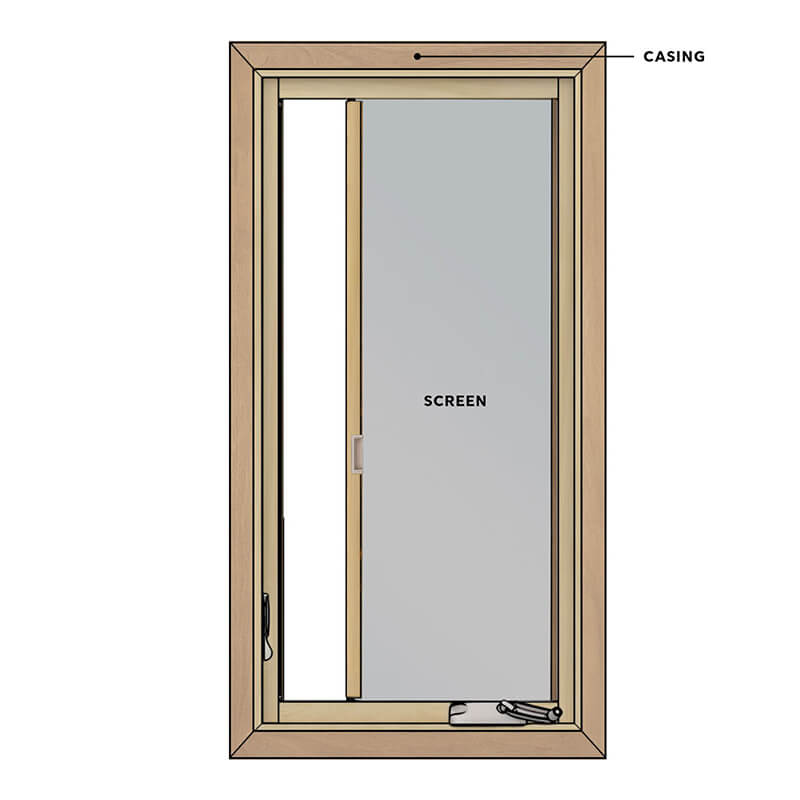 Screens are a see-through, tightly woven mesh most often made of either metal or fiberglass. Screens block out insects and debris like airborne seeds and falling leaves yet still allow light and air to enter the home. Some screens are installed into a narrow frame that can be removed for cleaning, and some windows have a built-in retractable screen like the one shown.

Window and door casing trim is designed to hide the gaps between a window or door frame and the surface of the interior wall. It is installed to the jamb liner and the finished surface of the wall. Casing is usually installed by a finish carpenter on site.

Brick mould casing, or brick moulding, is an exterior trim designed to conceal the gap between a window or door frame and the exterior wall surface. Brick mould is thicker than most interior casing trim profiles and provides a buffer between the window/door and the brick or other cladding surrounding it. Brick moulding is often, but not always, installed at the factory (Not shown). 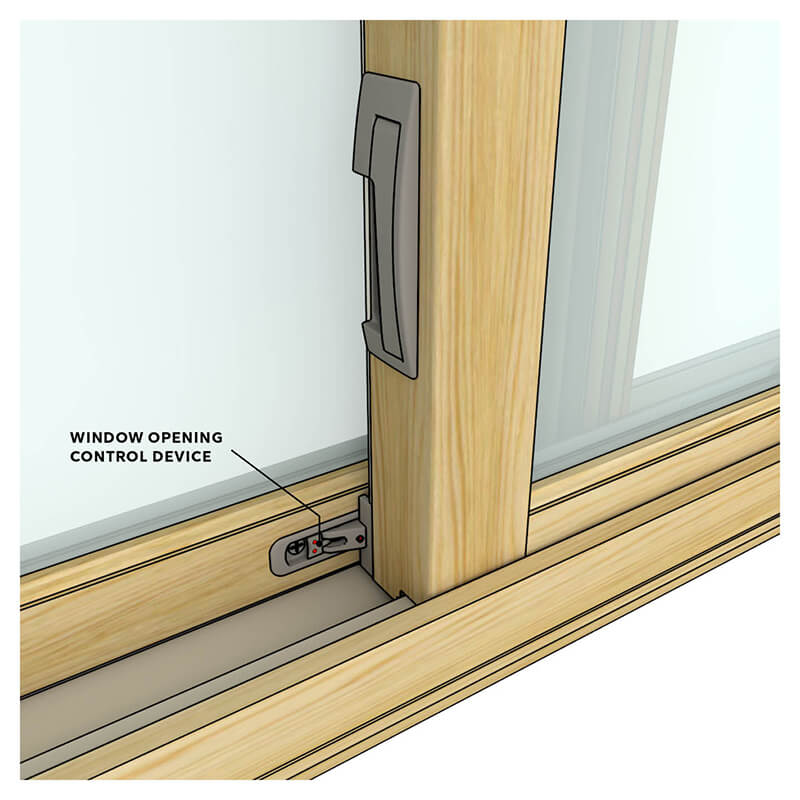 Window Opening Control Devices (WOCDs) are designed to prevent fall injuries to young children by preventing them from opening a window wide enough to climb out. WOCDs can be a building code requirement* for windows located near the interior floor and high up from the exterior grade. In order to meet these code requirements WOCDs need to:


*Building codes vary from one region to the next. Contact your local building official to find out the exact code requirements in your area.

A sash limiter is an optional device that can be set to limit the distance a window sash will open, but these devices are not designed to meet code requirements as Window Opening Control Devices are (Not shown). 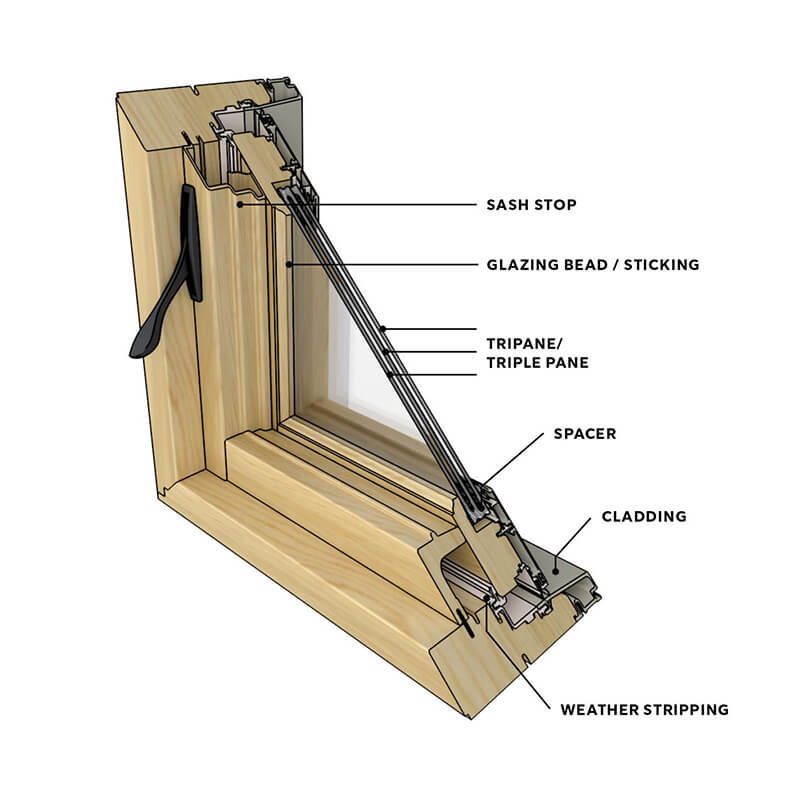 Many windows can be built with three panes of glass instead of two. Like standard dual pane glass, the space between the panes is insulated with argon or krypton gas, and a variety of Low E coatings can be applied to the glass surfaces to achieve a variety of performance requirements. Triple pane glass is sometimes chosen to increase energy efficiency in extremely harsh climates or as a noise mitigation solution.

Individual panes of glass are separated by glass spacers. These spacers also prevent the gas insulation from escaping.

Blind stop, parting stop, and sash stop are common types of stop mouldings found on a window. The function of most stop mouldings is to keep sashes secure and aligned within the window frame.

For Marvin products, cladding refers to the colored extruded aluminum used to cover the exterior portions of wood sashes and frames. Window and door cladding combine a low maintenance and durable finish of aluminum with the stability and insulating properties of wood.

The strips of profiled wood, vinyl, or capped aluminum used to hold the glass in position within the sash are called glazing bead. Glazing bead on the interior side of the sash is often called sticking. Ogee and Ovolo glazing bead offer a more traditional profile, and square beads are available for a clean, more contemporary look (Ogee shown).

Weather-stripping helps seal the gaps between the various components of a window sash and frame. In the past, weather stripping may have been made of a malleable metal like brass, but modern weather-stripping is typically made of a resilient, flexible material like silicone, rubber, vinyl, or foam.

When two or more windows are connected to each other, the area where the two side jambs meet is called a mullion (Not shown). 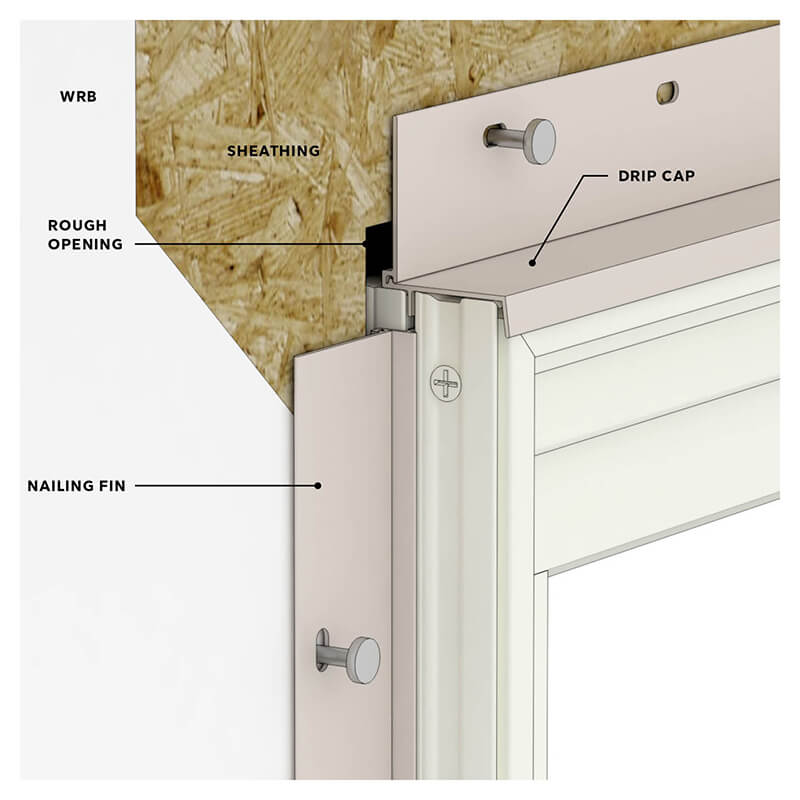 Also referred to as head flashing, drip cap is a formed metal or vinyl flashing, which is installed at the top of windows and doors. Drip cap is designed to shed water out and away from a window or door and prevent it from infiltrating into the home.

Nailing fins, sometimes called mounting flanges, are the thin strips installed around the perimeter of a window. The purpose of nailing fins is to secure the window to the wall sheathing and hold it in place while the shims and screws are being installed. Fins also work in conjunction with flashing and the weather resistant barrier (WRB) to prevent wind and water infiltration.

The hole in the wall in which a window or door is installed is called the rough opening (RO). Windows are built slightly smaller than the rough openings to allow room for minor adjustments and to provide space for insulation around the perimeter of the window and the wall framing that surrounds it.

The letters OX or XO identify the operation of window units as viewed from standing outside the building looking in. The letter O stands for stationary while the letter X stands for operating. 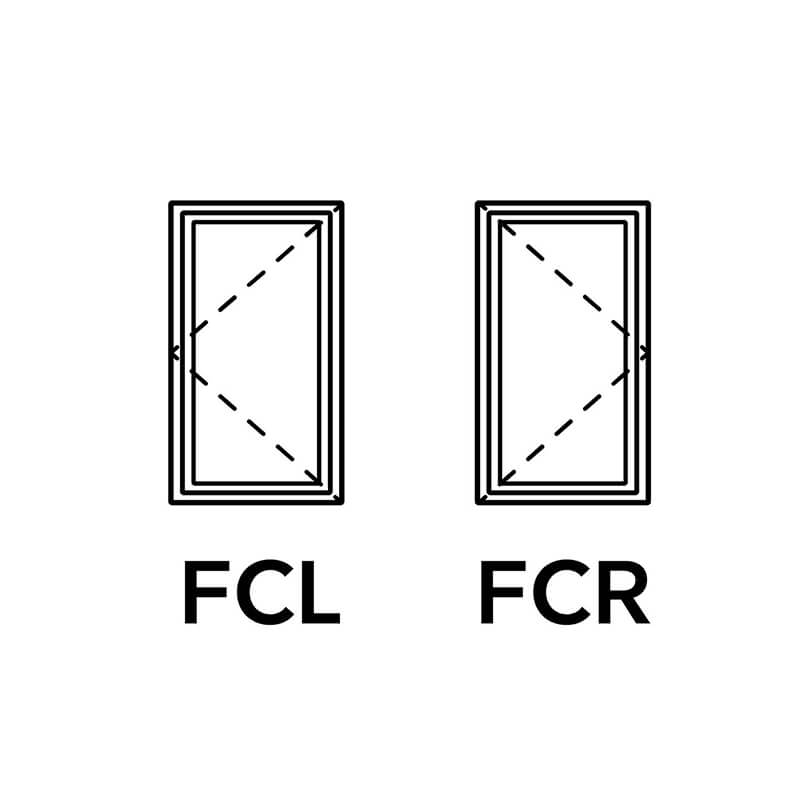 
Learn More about our Window Styles