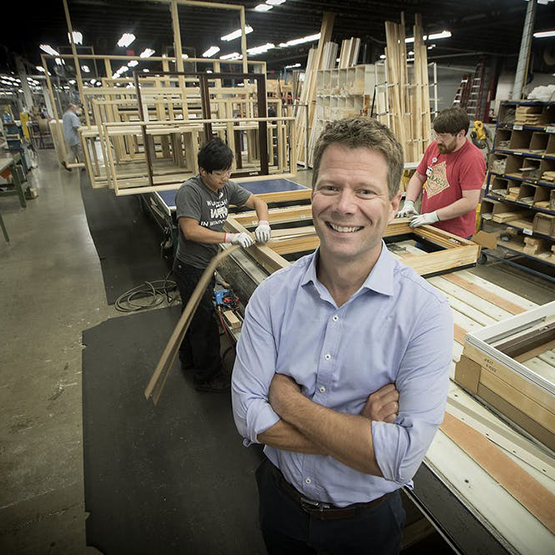 The family-run business had a humble start in Warroad and is now an industry behemoth.


Paul Marvin, 42, is currently president and succeeds his uncle, John W. “Jake” Marvin, as CEO. As such, he becomes the first among the fourth generation of family members to take the helm of the window and door manufacturer that was founded in northern Minnesota 105 years ago.


Today, the company boasts nearly 6,000 employees, 12 facilities in the United States and Canada and revenue of $600 million to $1 billion a year.


“I’m energized and inspired by this new opportunity to serve the company. Our purpose is to enrich the spaces where we live and work, and our future is to deliver on that purpose in new ways,” said Paul Marvin during an interview Wednesday at the headquarters in Warroad, Minn., a campus that sits 6 miles from the Canadian border and has seven factory buildings spanning 2.2 million square feet.


Paul, son of retired company President Frank Marvin, grew up working at the window factory during high school and college.


After college, at age 23, he founded a school bus company in Minneapolis that started with one bus and ended with 20 buses and 20 employees. He sold the bus business in 2006 and returned to Marvin Windows, where he became a marketing and operations analyst. He went on to become the manager of wood products, director of materials and then head of sales.


On Jan. 1, 2016, he was named president, gaining responsibility for prominent product brands Marvin, Integrity and Infinity.


The father of six — and one of 11 siblings and cousins comprising the fourth generation — admitted being slightly uncomfortable capturing the spotlight. The emphasis, he said, should be on family members who brought the company and himself to this point.


“It’s not about me. We will continue to lead as my great-grandfather, grandfather, father, uncles and aunt did: by keeping our customers, employees and communities at the center of our work,” Paul Marvin said. “The secret sauce of a family business is that you can’t do it alone.”


Jake Marvin, who has been at the company for 43 years, isn’t retiring completely. While stepping down as chairman and CEO, he will become a vice chairman of the board.


Susan Marvin, current vice chairwoman and a 35-year company veteran, will become chairwoman of the board of directors. She was president of the company until 2016, when Paul Marvin took over.


“I am very confident and very excited and very proud of this transition,” she said. “Paul is a great leader. And this entire fourth generation has so much talent. They have good compasses and seem to have totally embraced the values and purpose of the company. They are excited about carrying the company forward.”


George Marvin, another third-generation family leader, will continue his 45-year tenure and also serve as a vice chairman of the board.


Paul Marvin said that day-to-day business activities will be largely overseen by himself, his brother Dan, vice president of business development; and his cousin Christine Marvin, director of corporate strategy.


Only 3 percent of U.S. companies survive to see a fourth generation of family members assume a leadership role, “so it is an honor to carry on the family’s legacy,” Paul Marvin said. His goal is to ensure that Marvin Cos. remains a family-owned business making custom, design-conscious products for the home.


His focus will be on growth, he said. The question is how. The window and door industry is growing, but at far from warp speed.


Dashing between automated saws, conveyor belts and towering stacks of wood inventory, Paul Marvin said he gains clarity during morning runs and is determined to continue helping the business give back to employees, their families, the community and an army of dealers, architects and suppliers.


The leadership changes announced this week are part of a five-year transition plan, said Jake Marvin in a statement.


Back in 1912, Paul’s great-grandfather and Jake’s grandfather, George Marvin, started a tiny lumberyard and cedar company in what later became known as “Hockeytown USA.”


Bill, who died in 2009 at 92, groomed his four children — Susan, Jake, George and Frank — to take over the business. In noting that it’s time to once again pass the mantle, Jake said he has full confidence in Paul.


“Paul has demonstrated extraordinary leadership abilities at Marvin,” Jake Marvin said. “In the short time since he became president, he has identified new ways of delivering value in a fast-paced market while staying true to our purpose. He is positioning the Marvin Companies not only for today, but also for the future.”