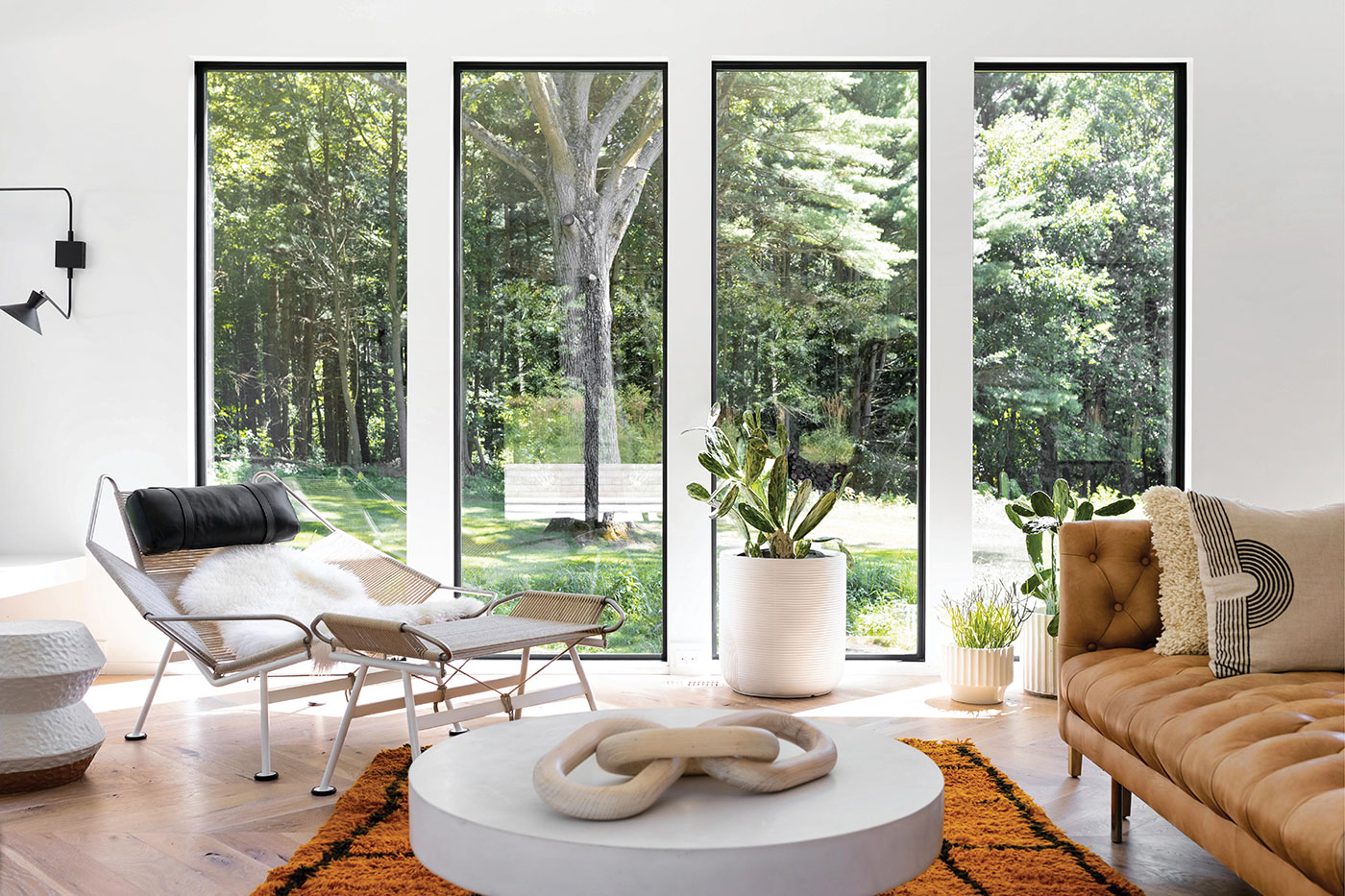 A Crash Course: Trends in Natural Light In Interior Design

New strategies and technologies can bring health benefits to commercial and residential spaces.

Circadian rhythms regulate body processes and contribute to overall health. They are, in part, reliant on cues from the natural environment, particularly cycles of daylight and darkness. However, modern lifestyles and the built environment can interrupt these natural cycles by either introducing too much artificial light at the wrong time or depriving people of sunlight.


Designers can help ensure that occupants of both residential and commercial buildings have access to natural light throughout the day. That said, sometimes there is simply not enough natural light available. In these cases, research shows that artificial lighting can play a role by mimicking natural sunlight. 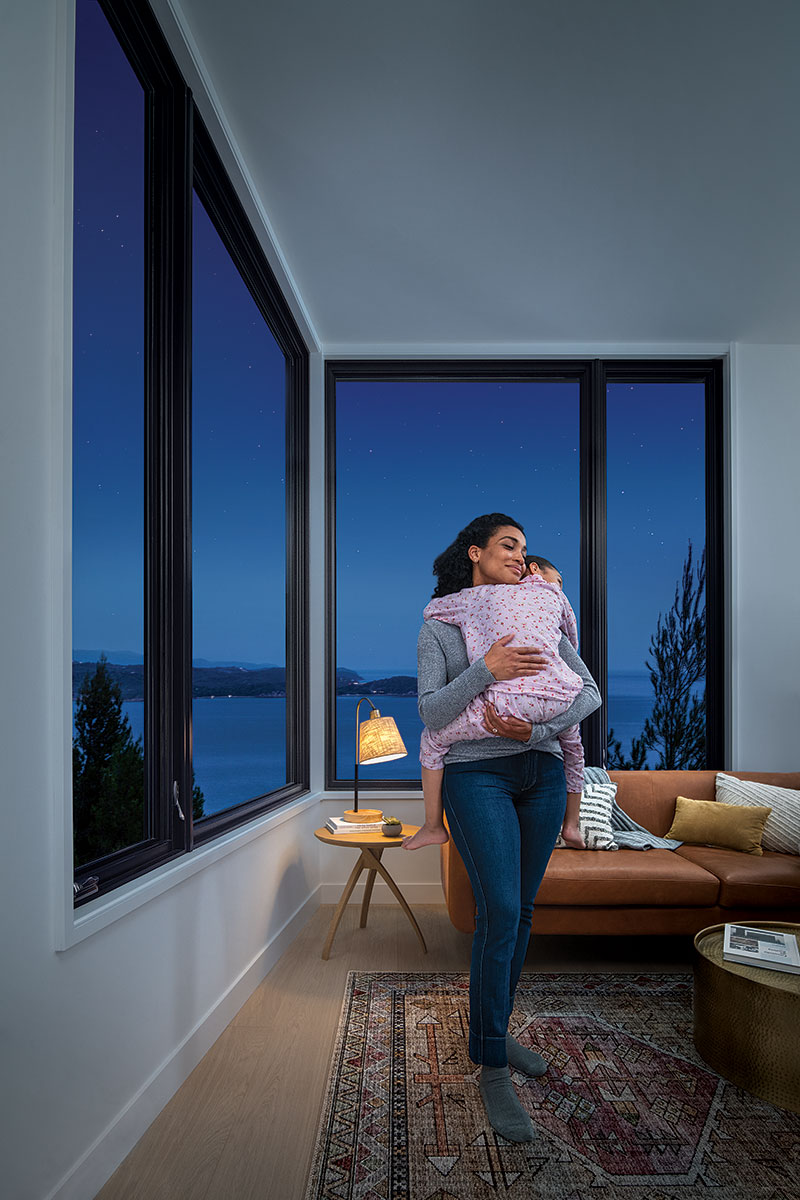 Circadian rhythms are physical, mental, and behavioral changes that follow a daily cycle. These cycles are set by a “master clock” in the brain and respond primarily to light and darkness in an organism's environment, regulating many of our daily cycles, including sleeping, eating, and hormone fluctuations.


The clock is generated internally, but it relies on signals from the external environment to synchronize it. Light is the primary cue governing our sleep and wake cycles.


Melatonin helps synchronize the circadian rhythms with the environment and the body. In addition to regulating metabolism and sleep patterns, the circadian system influences important functions such as heart rate, blood pressure, body temperature, hormone levels, and urine production. Because of its role in regulating sleep, melatonin can be used to treat sleep disorders and reset the biological clock after a major disruption, such as an overseas flight.


Not so long ago, human activity was dictated by the sunrise and sunset. While people have long used fire and fuel lamps to extend productivity before and after dark, it was not until the advent and spread of electric lighting that we seriously began to subvert the natural cycles of day and night.

With the plethora of streetlights, signs, billboards, security, and porch lights, it is often impossible to escape light pollution, which can cause circadian disruption. In fact, more than 80 percent of the world’s population lives under skies that are nearly 10 percent brighter than they would be normally. The problem is worse in industrialized countries, with 99 percent of Europeans and Americans living under light polluted skies.


Much artificial lighting has been converted to fluorescent lamps and/or LEDs. While this is certainly good news for improving energy efficiency, both emit a high percentage of blue light.


In addition, most of us spend hours in front of screens, which also emit short-wave blue light. While light of any kind can suppress the secretion of melatonin, blue light at night does so more powerfully. Exposure to this type of light at the wrong time—say, right before bedtime—can slow or even prevent melatonin production and prevent us from getting a good night’s sleep. 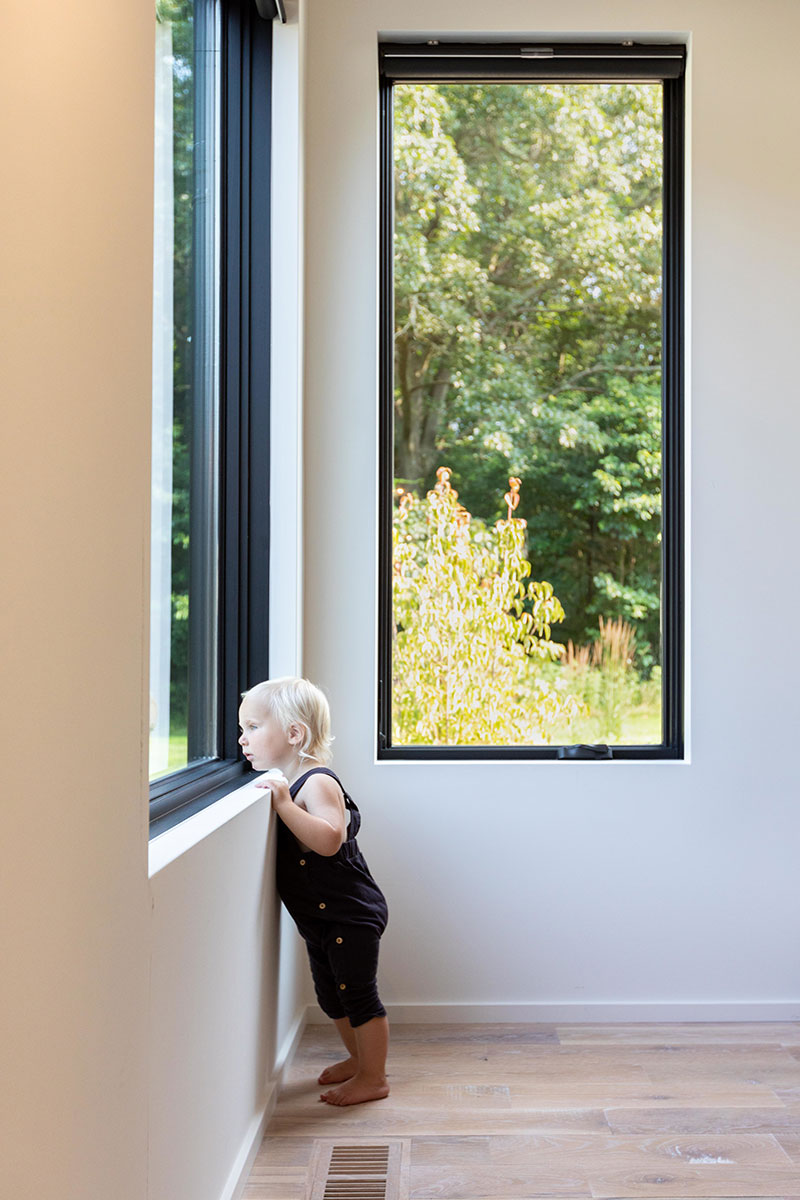 Ironically, many people suffer from the opposite problem: not enough exposure to natural light during the day.


Exposure to high-intensity blue light is key for regulating circadian rhythms; however, people are spending more and more time indoors, many in buildings without adequate daylighting. According to the Environmental Protection Agency (EPA), people spend 90 percent of their time indoors. If this time is spent in buildings with inadequate daylighting, it could be enough to disrupt circadian rhythms and impact the quality of sleep. Fortunately, there are many ways to bring natural light into buildings, to the great benefit of building occupants.

There are several key reasons to promote daylighting in buildings. First, daylighting reduces the need for artificial lighting and makes buildings more energy efficient. Second, daylighting is a biophilic design strategy that connects building occupants to aspects of the natural world, including fresh air, sunlight, and views of the outside. Daylighting can promote social interactions and help create feelings of well-being in building occupants. Finally, exposure to daylight supports our circadian rhythms and, by extension, the physiological processes that are vital to good health.


Many studies have quantified and documented the positive impacts of daylighting on the health and well-being of building occupants. Daylighting can promote employee productivity, help reduce absenteeism, and even boost retail sales. In health-care settings, daylighting and views of nature may aid in healing and reduce reliance on certain medications. The role of daylight and artificial light in supporting circadian rhythms is a newer field of research, but an exciting one. 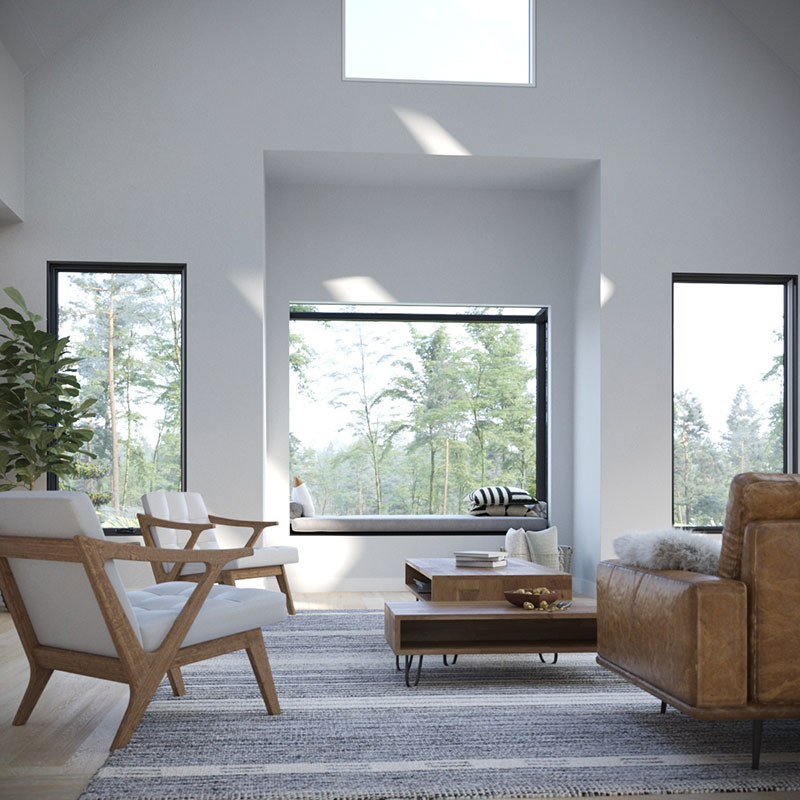 The primary way to introduce light into a space is through windows, skylights, and light shelves. In general, people gravitate toward spaces that are lit from more than one side, as this scheme is apt to feel more “natural.” It may also reduce glare.


Glare is caused when there is a significant difference between the surface an occupant is trying to view—a computer screen, for example—and the sunlight coming through a window. Glare can cause the eye to work hard to adjust, resulting in fatigue and eyestrain.


Ideally, brightness levels should be kept relatively even across the occupant’s field of vision within a space. The location of openings and use of awnings and overhangs can help control glare and radiation, as can the use of controls such as internal or external shading.


View-framing “window walls” are increasingly appealing, but it’s important for architects and designers to be aware of the dynamic relationship between glazing, building orientation, daylighting, and solar gain. 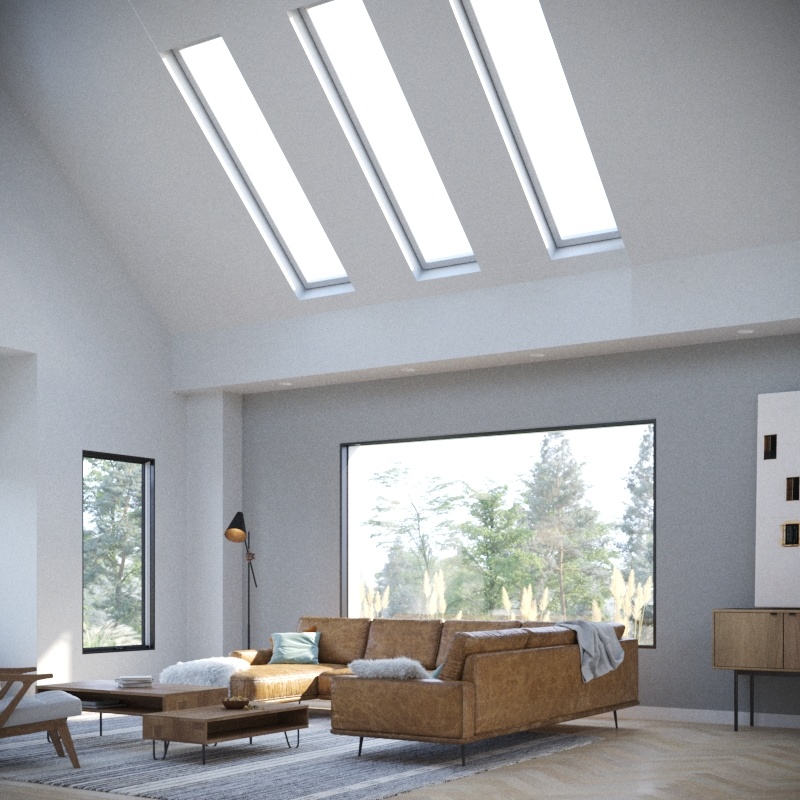 Skylights can help create lofty and inspiring spaces. In fact, one study of retail chains in California showed that 49 stores that were retrofitted with skylights saw sales increase by 40 percent. Terrapin Bright Green estimates that, in general, skylights statistically increase sales by $1.55 per square foot in grocery stores, clothing outlets, and retail chains across the country.


Skylights are a particularly effective source of daylight because they bring in light from the brightest part of the sky into spaces not reached by perimeter windows. Skylights funnel light directly from the sun in addition to capturing light reflected from clouds and other surfaces.


Skylights can drastically reduce electric lighting energy demand, however, solar heat gain must be controlled with interior or exterior shading devices, which can be either manually or automatically controlled. Skylights can also be equipped with rain sensors, which automatically close when they detect moisture, the sound or pressure of rain hitting the unit, or both.


While skylights cannot be used in every building, they are a good option for one-story and low-rise buildings and many homes. In homes, skylights can bring natural light into interior rooms and transitional spaces. They can also introduce fresh air and, in some cases, views of nature. The natural cooling provided by skylights can save on energy costs, assuming solar gain is controlled.

Up until recently, open plans were becoming more popular in both residential and commercial buildings. In homes, this translates into open kitchens and informal dining areas that connect to living rooms with plenty of windows. In commercial buildings, there is a trend toward offices without walls and retail spaces illuminated with natural light.


An interior layout designed for daylighting will ensure that all occupants—not just those located near windows—enjoy the benefits of daylighting. Private offices should be located toward the core of the space, and panels separating workstations should be as low as possible. Glass walls and light-colored surfaces can be used to disperse daylight throughout the room. Interior solid partitions, for example, can drastically cut daylight penetration. Replacing these with glass partitions can help. 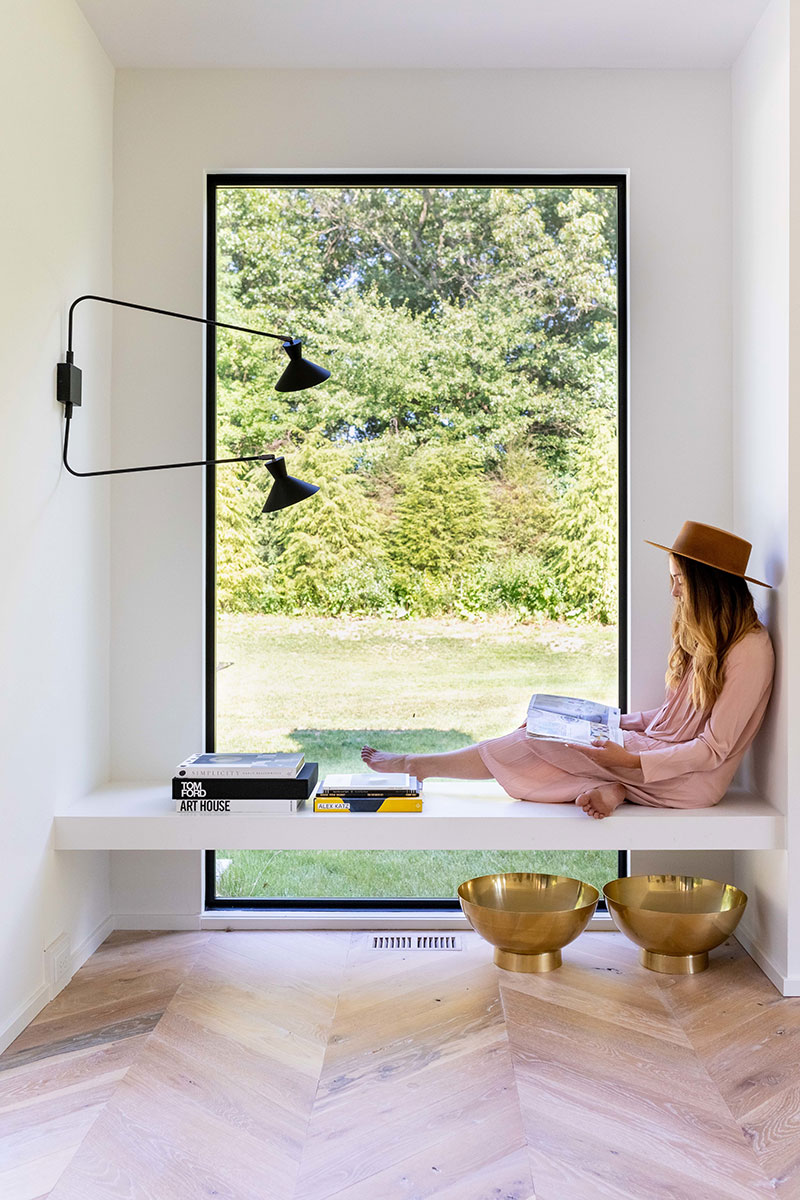 The Potential of Tunable Lighting

While daylighting has many benefits, including helping to keep circadian cycles in sync, people often are not exposed to enough of it throughout the day. Sometimes there simply is not enough natural light available, whether because of the design constraints of a building or because of the season or geographic region in which a project is located. Consequently, artificial lighting can play a vital role in supplementing daylight and promoting the well-being of building occupants.


Until recently, much of the research on daylighting has focused on the benefits of daylighting in a number of building types, including retail shops, offices, and health-care settings. Now, a new wave of research is focusing on how exposure to natural light can help regulate the body’s circadian rhythms.


While there are strategies that can go a long way to ensuring adequate exposure to natural light, in some cases, natural light may need to be supplemented with artificial lighting to receive these benefits.


Most electric lighting is designed to meet the visual requirements of occupants; however, both higher light levels and shorter wavelengths are required to activate the circadian system.


So-called tunable lighting can help ensure that building occupants are exposed to enough high-intensity blue light during the day, and that exposure to such light in late afternoon and evening is minimized.


New lighting technologies can possibly enable greater control over both the amount of light and its “spectral characteristics” (i.e., whether light is warm or cool). Both of these qualities can promote circadian processes and health. Increasing interest in how buildings can promote human health is driving the development of these technologies and research that attempts to quantify the benefits in a number of settings, from health care to classrooms.


There are several types of tunable lighting. The simplest, sometimes called “dim to warm,” is available in a color temperature range of 2700–3000 Kelvin (K). These lights are dimmable; as the light dims, it becomes warmer. This type of lighting is a good option for homes and hotel rooms, as light in this color temperature range tends to promote relaxation. Light that becomes “warmer” as it dims simulates natural light as the sun lowers past the horizon and the sky goes dark. 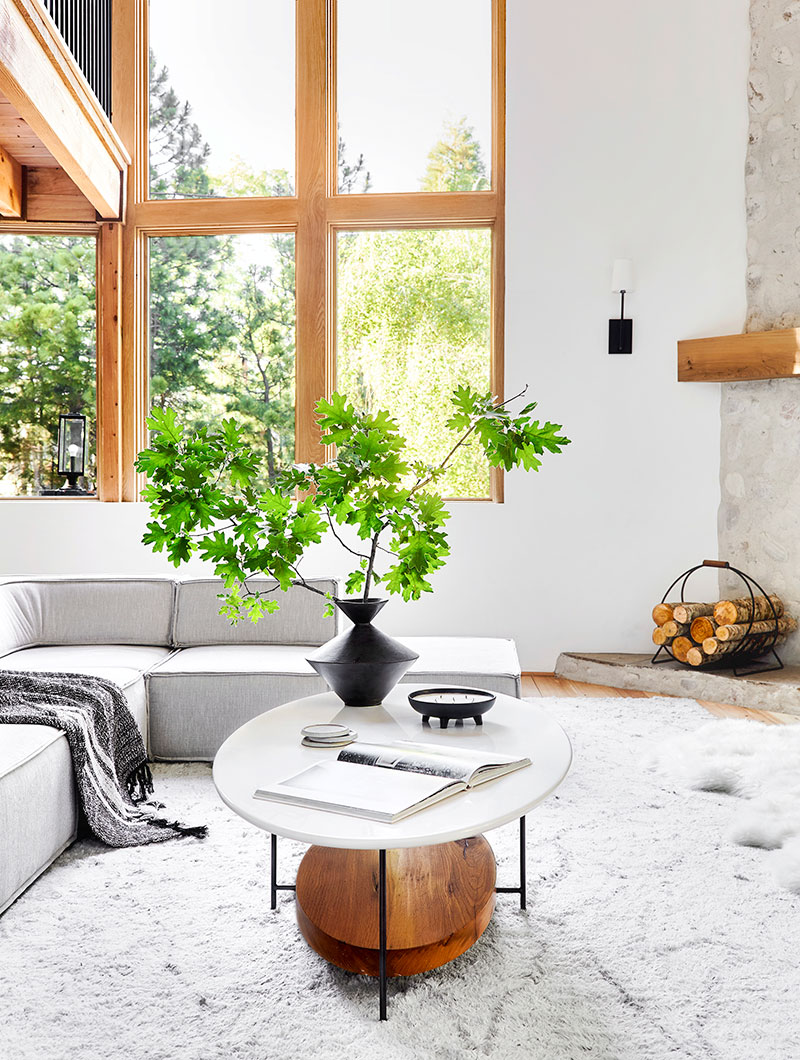 Using Biodynamic Lighting in Your Home

While windows, skylights, and other strategies focus on bringing available sunlight into spaces, biodynamic lighting represents the next evolution in lighting, with potential applications in many building types, including homes. Biodynamic lighting enables lighting systems that mirror natural sunlight conditions to be installed in the built environment and these systems may help to regulate the human body’s natural circadian rhythms.


Another application for this type of lighting is the ability to extend daylight. For example, the Marvin Awaken Skylight can extend daytime hours with supplemental, tunable lighting that helps create the comfortable feeling of daylight anytime.


This skylight can extend daytime hours with supplemental, tunable lighting that helps create the comfortable feeling of daylight anytime. This product could be an especially good strategy for northern climates, which experience more severely shortened days in winter. This skylight features the largest daylight opening in its category, maximizing daylighting potential; it is also equipped with motorized roller shades that can be used to control strong sunlight.


Our bodies are governed by circadian rhythms that rely on cues from the natural environment, especially periods of sunlight and darkness. Modern lifestyles can disrupt these important cues, with consequences for sleep, physical, and mental health. Building designers have an important role in promoting health and well-being by implementing good daylighting design in buildings. Good daylighting can help support circadian rhythms while providing many other benefits, reducing reliance on artificial lighting, creating welcoming environments, and promoting connections with the natural world. Biodynamic lighting can supplement daylighting design and may be used to support circadian rhythms, which play a role in so many important physiological processes.

A version of this article was first published in Architectural Record.