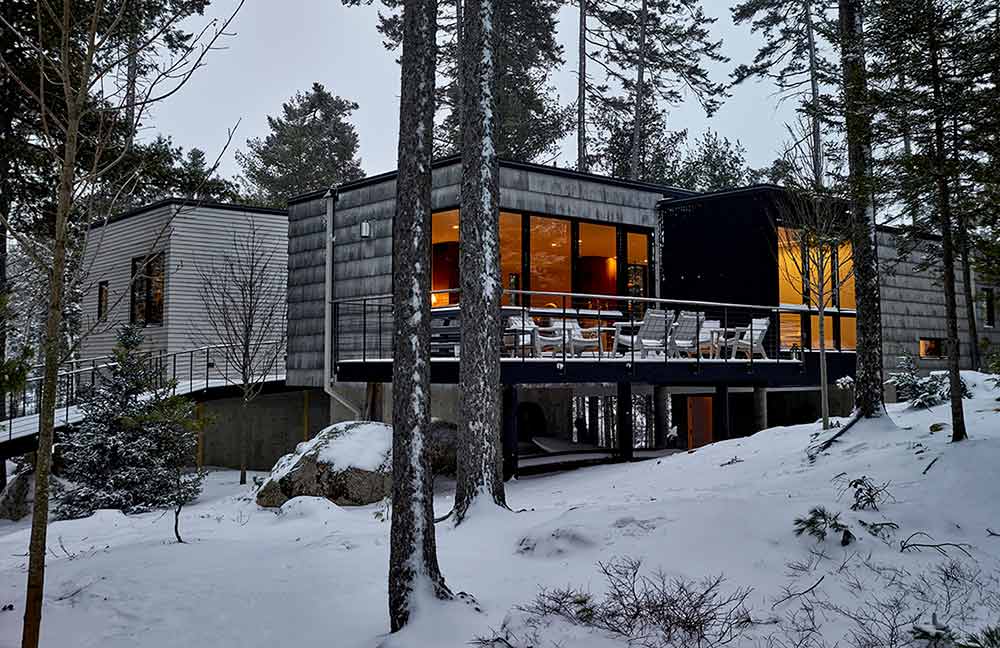 The northern Maine hideaway rests on piers above the forest floor and employs broad windows to frame the homeowner’s most prized views of the site.

Stephen Peck and his husband, John Messer, walked their remote, 10-acre plot in Maine for nearly a decade before building their dream home. Yet it was all those walks—paths through the property’s dense forest and around massive boulders to the pond’s edge—that ultimately inspired the structure’s placement deep into the forest, where the site best captures their favorite perspectives of the place. 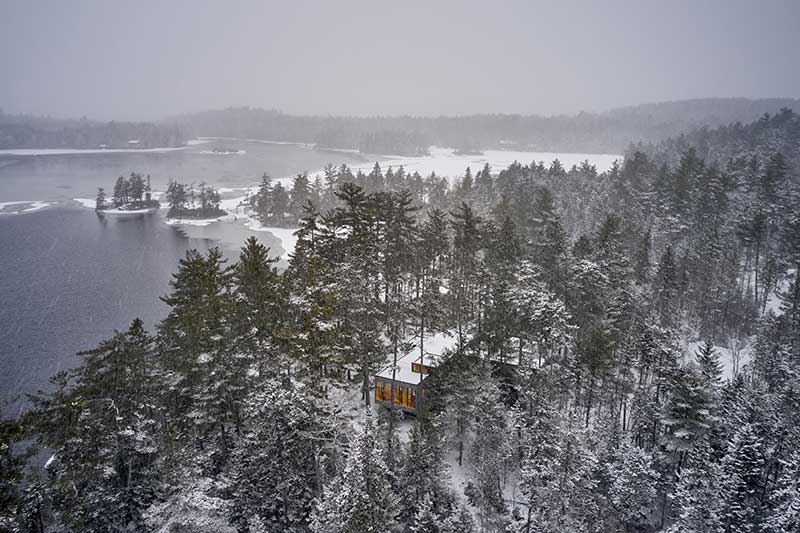 Sited along the edge of a secluded pond in Maine, the low-slung structure recesses into its surroundings. A winding boardwalk connects the home and parking area, tracing through the forest and a boulder field while allowing the homeowners to slip into the rhythms of nature. 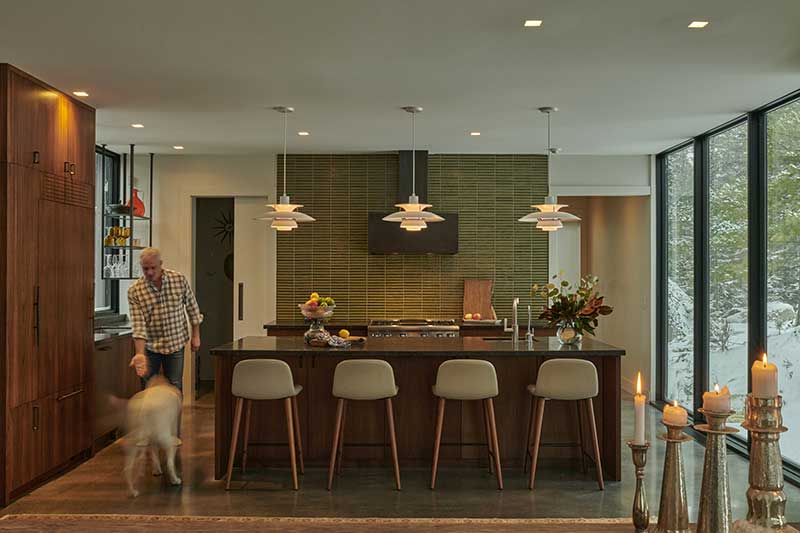 Homeowner Stephen Peck and the family Labrador, Luke, in the home’s kitchen. Throughout the interior, earthy color tones are complemented by midcentury modern details and expansive Marvin Ultimate windows overlooking the landscape.
After many years in South Florida the couple began looking for a summer home in the Northeast around 2005, eventually purchasing the remote site near Dedham. "We were looking for a respite from the congestion and wanted to find land on an inland body of water, like a lake or a pond, so we could extend the swimming season," explains Peck. The property, which they’ve now made their full-time home, has few close neighbors and occupies a peninsula along the water’s edge.

Taking advantage of the remote location, the couple also opted for floor-to-ceiling Marvin Ultimate windows and doors throughout the home. "I imagined large expanses of glass to capture sunlight both in the morning and late afternoon," Peck says. "It was about creating an experience within a space—keeping us connected to nature and the feelings of this site." 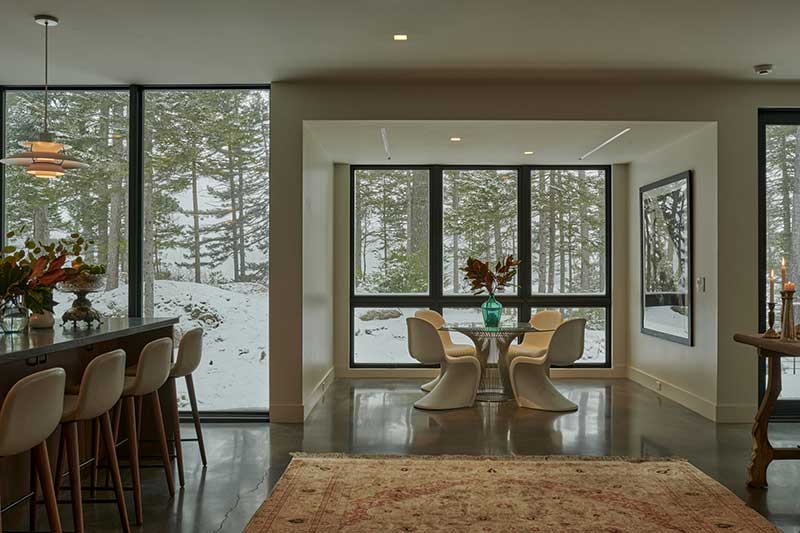 Caption: Walls on each side of the open-concept living area are framed in floor-to-ceiling Ultimate Casement and Awning windows, which balance the couple’s desire for a modern aesthetic with the durability required for Maine’s extreme weather variations. 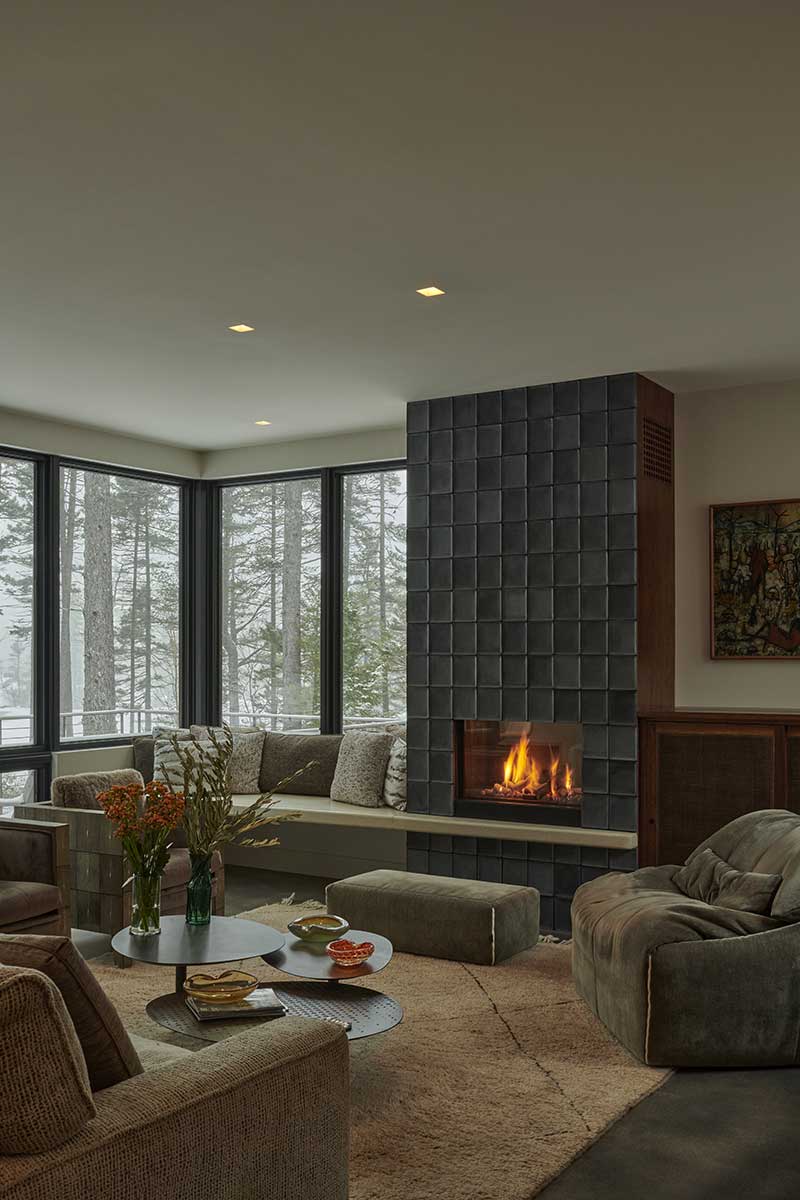 The concrete fireplace hearth extends to form a seating area in the corner. Views from the Ultimate Picture and Awning windows overlook the dense woods and stretch down to the waterfront.
Peck, who also works as an interior designer, led early stages of conceptualizing the site plan and layout, even conducting studies to chart paths of the wind and sun. "I envisioned a space that was relaxed and easy," he comments. "I knew it wasn't going to be a traditional camp in Maine, with knotty pine or a rustic interior. It’s a more refined interior than you might expect, but there's an informality to it as well." 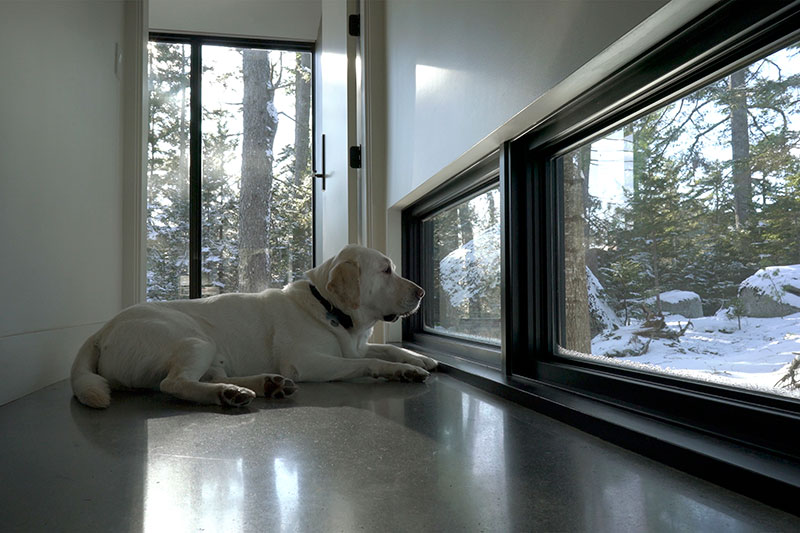 Ultimate Casement windows line the bottom of a hallway leading to the principal bedroom, providing an ideal spot for Luke to observe the action outside. 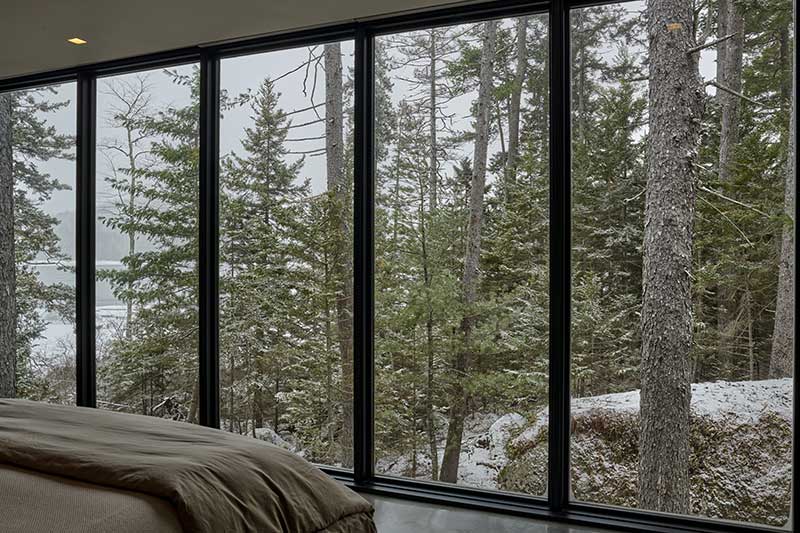 A wall of floor-to-ceiling Ultimate Picture windows stretch across the bedroom. "Staring through the glass on a clear night we can see an incredible view of the stars," Peck says. 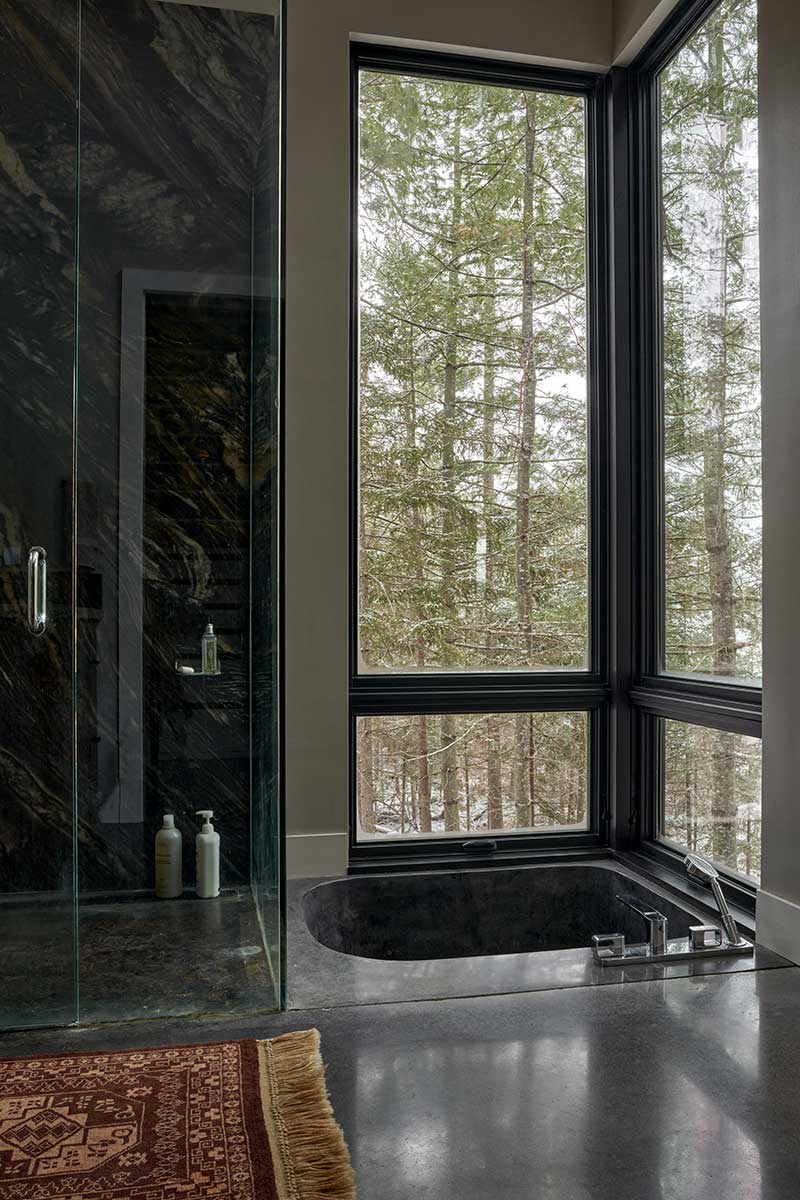 The en suite bathroom is clad in Brazilian marble and features a pair of Ultimate Awning and Picture windows surrounding the sunken tub. "I see the glass as more than just a transparent barrier to the outside," Peck comments. "The Marvin windows take a back seat—so much that you don’t even notice them."
Peck also enlisted the local expertise of Elliott Architects to refine his vision and bring to life the various experiences of the site. "The winding walk down to the pond—the sort of meandering and opening up of the view between the big rocks—has been a metaphor for the whole project," says project architect Isaac Robbins. "The further you get away from the home, whether up the driveway or out to the edge of the pond, the less you see of it and the less you're aware that it's there," he adds. "The materials and windows all aid that effect." 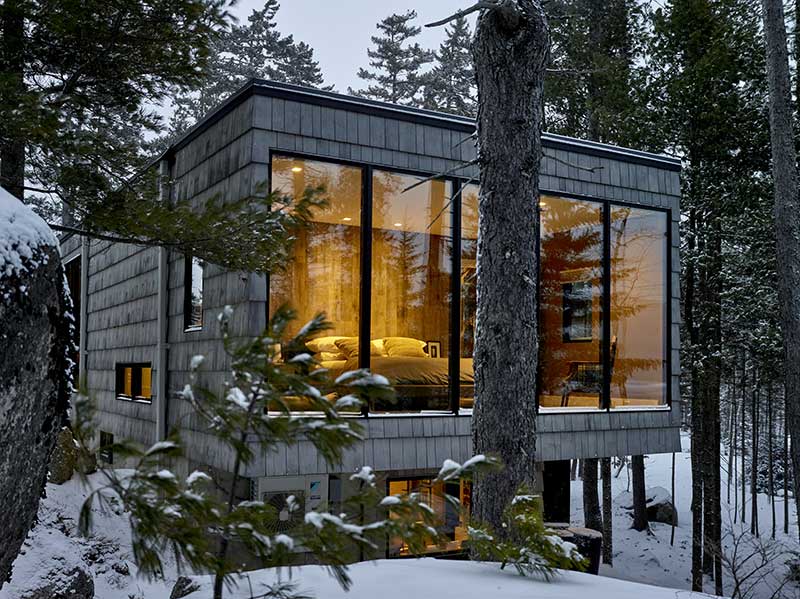 "When I first got down to this site, the boulder that is now along the walkway blew me away, as did the one outside of our bedroom," Peck says. "I knew immediately that’s where the house should be located." 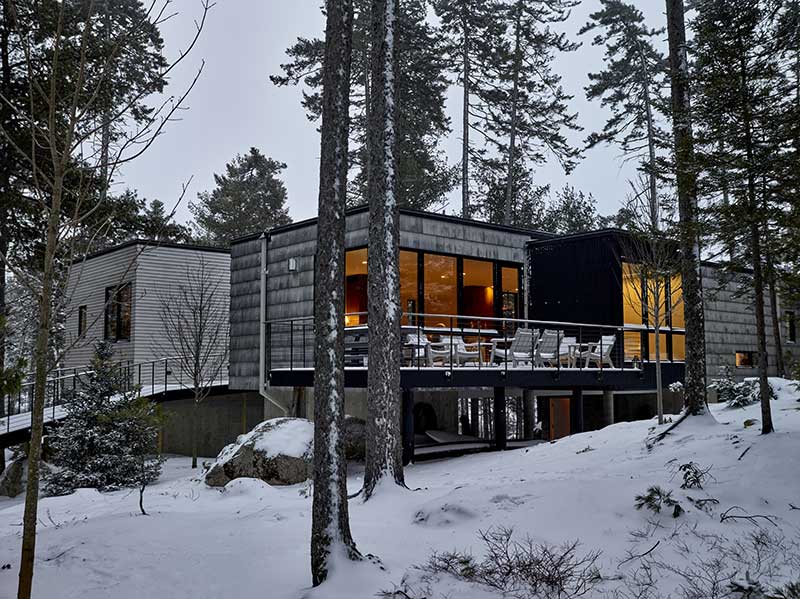 A large deck lines one side of the home, which is mostly built on piers. "One of the big challenges was finding a way to float the home above the landscape," Robbins says. "We weren't trying to exaggerate or make a statement in any way. Rather, we wanted the home to sit lightly." 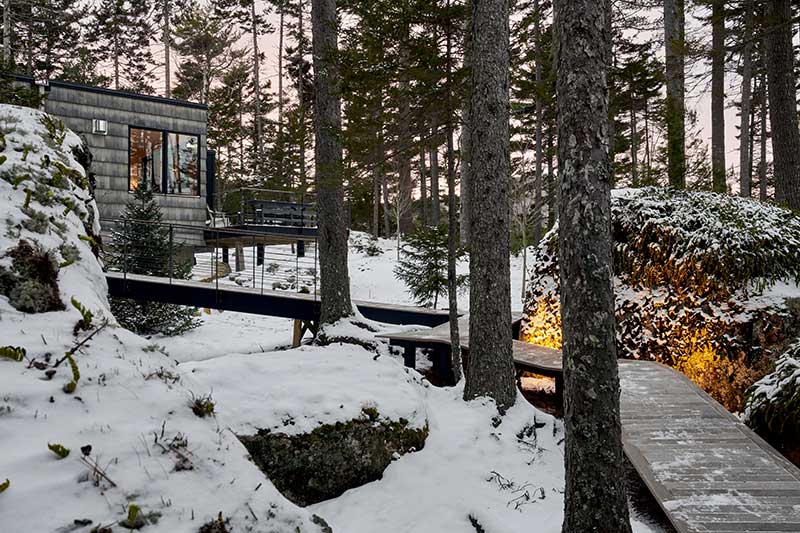 Connecting the structure with a car park, the boardwalk winds between large, moss-covered boulders. About the pathway, Peck adds: "It was meant to recreate the experience of leaving everything behind. I stare at the immense boulders and most of the stress, for me anyway, just melts away."
"The draw of this place was being on our own," Peck says. "Coming from a dense urban environment, we felt vulnerable to nature when we first arrived. And even though we’ve built a home that protects us from the outside, there is also a sense of not wanting to get too far away from it. When the sun comes up after a snowstorm, it's really magical to be here, surrounded by the woods, with glimpses of the boulders and pond out the windows." 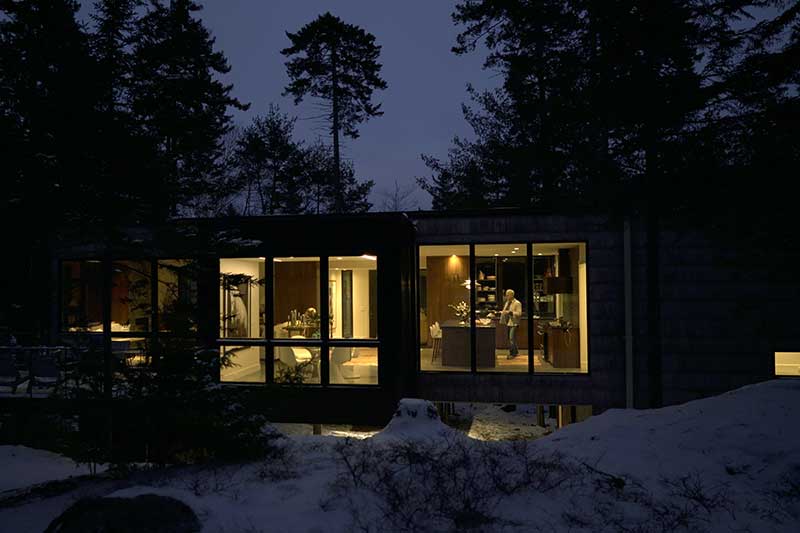 At night, the expansive windows and doors allow a warm light to emanate into the remote forest.
Project Credits