Your Complete Guide to French Doors

Learn everything you need to know about French doors, including the history, defining features, and design options.

November 28, 2022
French doors have always been de rigeur in residential design. The name itself sounds sophisticated. But what lies beyond the name and under the surface of this door type? Why would you choose French doors instead of a modern swinging door, for example? We delved into the subject to bring you the complete guide to French doors, so you can make the most informed decision when it comes to choosing the product that’s best for you.

What are French Doors?

Back in the 17th century, French architects, inspired by Italian designs, started installing large casement windows, side by side, that ran all the way to the floor. These French windows were designed to bring more light indoors and to create easy access to balconies and verandas. French windows became popular in England and eventually found their way to the United States, under the new name of French doors.

French doors today, like their original French window predecessors, are comprised of two panels made mostly of glass. Aesthetically, they can also be recognized by their wider, more weighty, top and bottom rails. It’s also common for French doors to feature some sort of divided lite pattern, which is an homage to the original French windows which were built with smaller, individual panes of glass divided by muntin bars. At that time, muntin bars served a practical purpose because large panes of glass were not readily available.

It's not surprising that French doors are closely associated with a more traditional aesthetic. Installing French doors is still an effective way to flood a room with natural light and they commonly offer access to decks and patios. Interior French doors are also available and can be a dramatic design element when used as a passage between large indoor spaces. 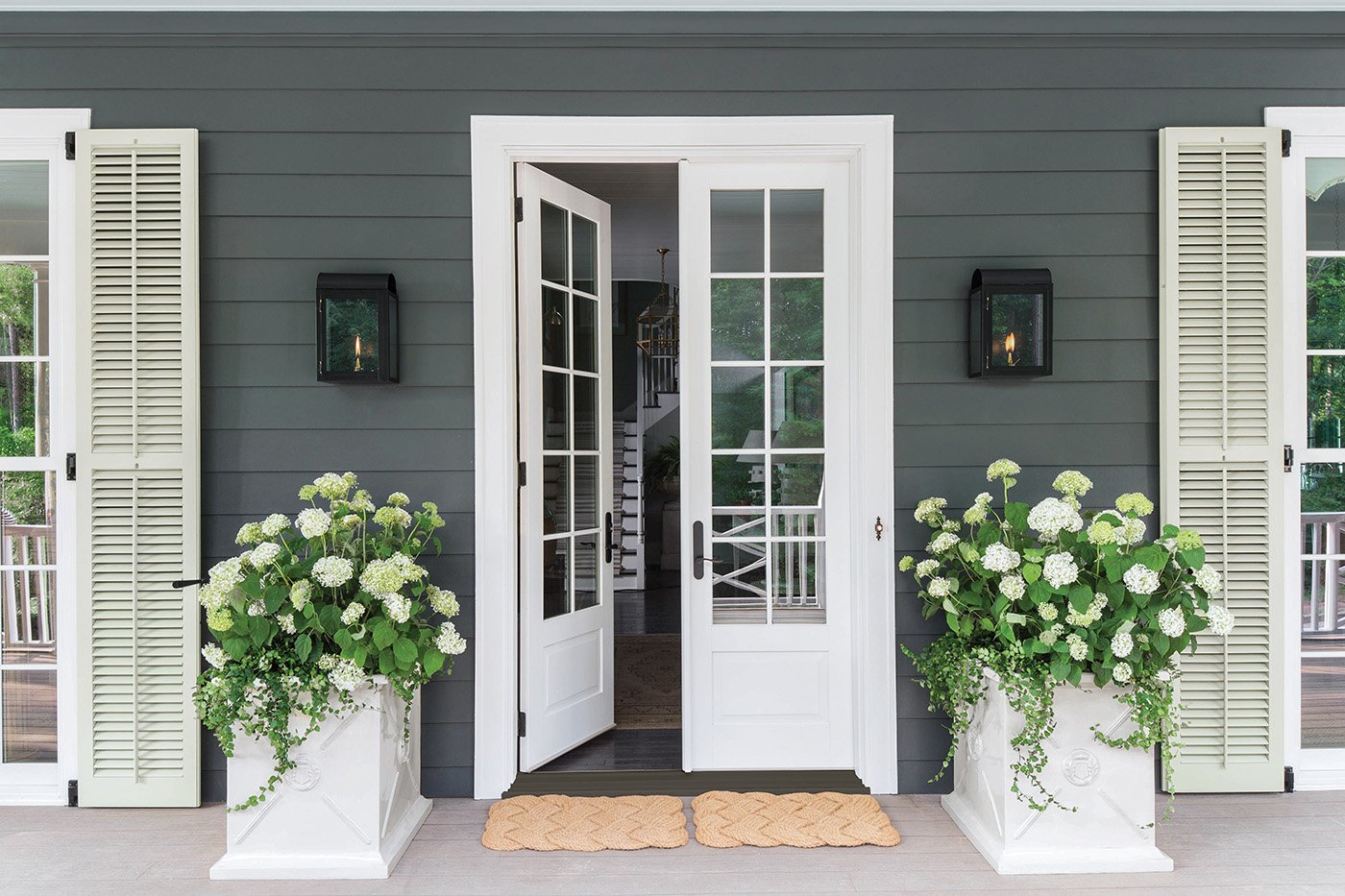 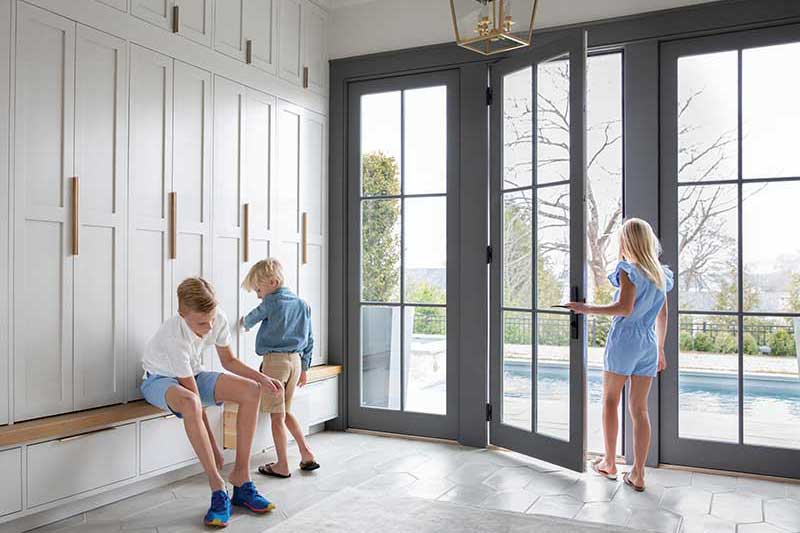 Inswing or Outswing, Which is Better?

Historic French windows were hinged on the sides, and due to the popularity of small balconies, they swung into the home. Today, both inswing and outswing doors can be found in homes throughout North America, and each has its advantages. Should you choose an inswing or outswing French door? Here is a list of unique characteristics to help you decide:

Pros of an Inswing French Door

Pros of an Outswing French Door 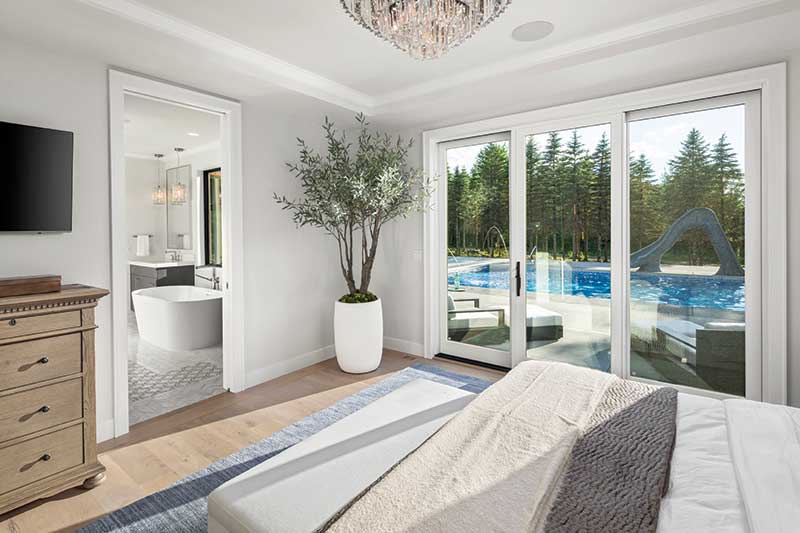 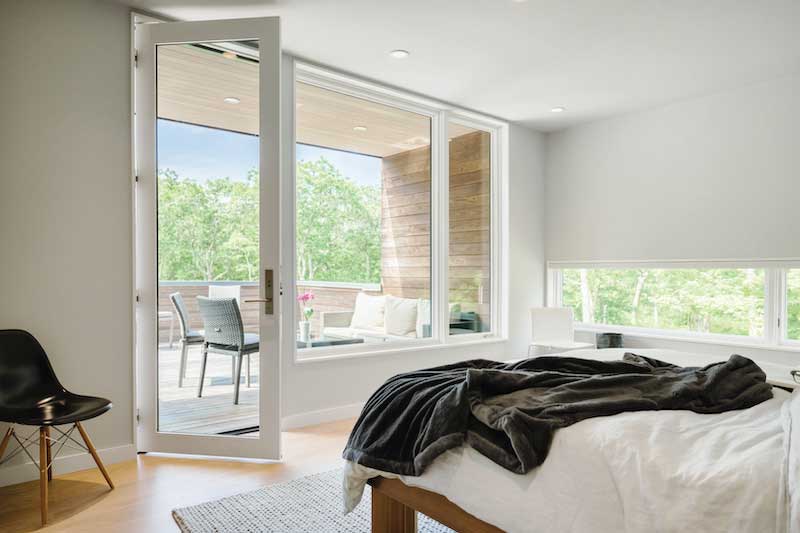 Photo by Kellie Doeren for Dwell

Are Sliding French Doors an Option?

The answer is yes. Originally, all French doors were swinging doors. More recently, the configuration of the door panel defines a French door as much as the way it operates. Even though they slide, two door panels that feature wider top and bottom rails, especially if they are adorned with a window grid of some kind, would be considered a French door. The primary advantage of a sliding French door is that it requires less space to operate. You can place furniture on either side of the door, both indoors and out, without interfering with the door’s operation. And because a sliding door has less hardware (hinges, etc.) than a swinging door, a sliding French door is less expensive.

What Materials are French Doors Made of?

Nothing can match the warmth and beauty of natural wood. The interior wood on a French door is often protected by exterior cladding made of extruded aluminum. All-wood French doors are also available but are more commonly found on historic renovation projects.

Fiberglass has excellent thermal properties, is extremely stable, and resists scratches, dents, and fading. French doors made of fiberglass exteriors and wood interiors are a great option if you want to benefit from both the protective advantages of fiberglass and the luxurious feel of real wood.

Vinyl French doors are the least expensive option, but vinyl is also the least stable material option. Vinyl can get brittle in extremely cold temperatures and can be subject to warping and distortion when exposed to high temperatures and long durations of direct sunlight.

Do French Doors Vary in Size, Shape, and Operation?

While all French doors share some of the same characteristics, there are many options for design flexibility to meet your unique vision. For a truly charming aesthetic you can’t beat an arch top French door. Adding sidelites to one or both sides or a transom window above are impressive ways to capture more natural light and open up interior spaces.

When it comes to operation, you have options. French doors can be configured so one of the door panels opens while the other remains stationary. In this case, the operating panel can even be hinged to the stationary panel at the center of the opening. French doors are available in a wide variety of shapes and sizes as well. Choose to have one of the door panels a different size than the other or make a bold statement with a French door 10 feet tall and 7 feet wide.

What Types of Glass are Available for French Doors?

At Marvin we offer the same glass insulation packages for French doors as for windows. That includes several combinations of insulating coatings designed to optimize comfort and energy efficiency for the specific type of climate you live in. Triple-pane glass delivers additional energy efficiency and sound reduction. There are also many different types of decorative and privacy glass options. The glass in all doors is required to be tempered, and a combination of tempered and laminated glass is used in French doors installed in homes susceptible to hurricanes or when more robust security measures are desired.

Achieving the classic French door grid or grille pattern can be accomplished using several methods. Dividing bars can be attached to the outside of the glass, or both the inside and outside of the glass. These are known as Simulated Divided Lites (SDLs). For easy cleaning, bars can be placed between two panes of glass. This is known as Grilles Between Glass (GBGs). A grille pattern can also be created using individual panes of glass separated by functional muntin bars, which are called Authentic Divided Lites (ADLs). This last option is most often used on historic renovations when product replication accuracy is important or required by zoning authorities. 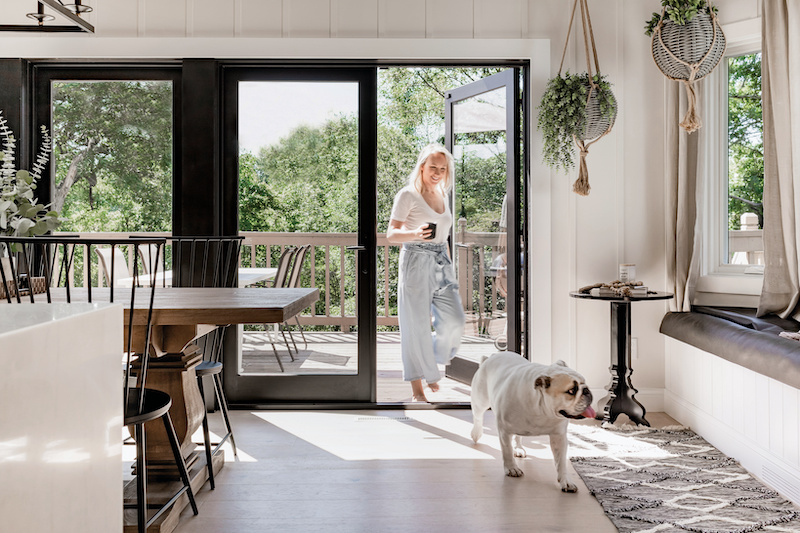 Yes, a French door can be energy efficient, but only if you pick one that’s best suited for your particular home. Here are some things to consider. Adding a third pane of glass can improve a door’s overall energy performance, so can altering the amount and type of Low E coatings. For example, if you live in the far south, you’ll want to choose glass in your French door that cuts down on solar heat gain. If you live in the north, you might want glass that keeps the cold air out but allows solar heat gain to help warm your house during the winter months. The most important factors when selecting an energy efficient French door, is how well it’s manufactured, and the quality of the materials from which it’s made.
Browse French Doors 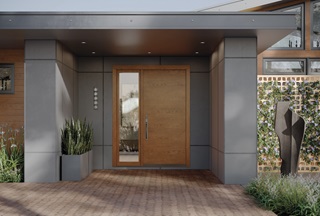 We explored some of the latest trends in modern front door design and entry systems, including natural wood options and front door color choices. 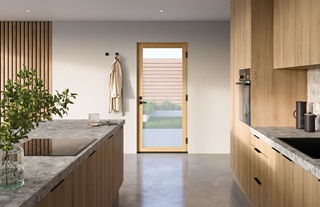 The Latest in Doors - When Less Door is More

This door trend is one we’re predicting will stand the test of time – narrower frames for bigger views and more light. 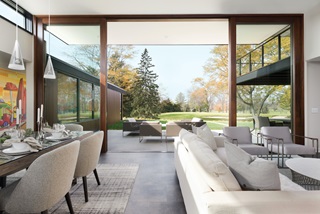 Did you know conventional windows and doors are not your only option? Find out how to leverage light, views, and air in new and thoughtful ways.