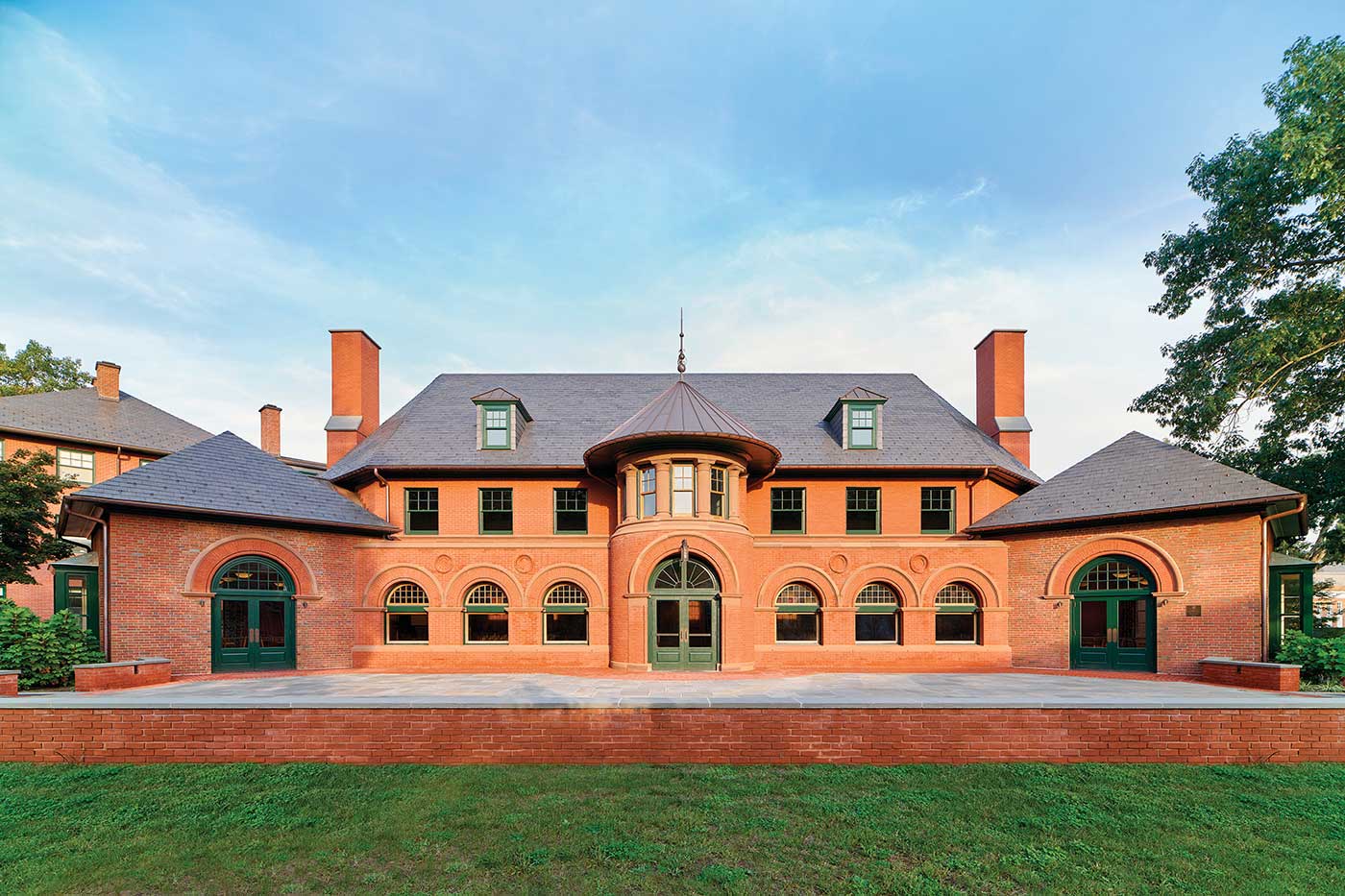 The dining hall of a historic school is reimagined and retrofit to reflect the campus’s original architecture.

The Lawrenceville School in Lawrenceville, NJ is one of the nation’s most historic and renowned boarding schools. Shaped by prestigious architectural names such as Peabody & Stearns, Delano & Aldrich, and Frederick Law Olmsted, the school’s Queen Anne and Romanesque Revival architecture conveys the rich history of the campus. But one important part of the school clashed with its surrounding architecture.

The Abbott Dining Hall was a 1960s addition to a dormitory, created with a modernist brick-and-glass design that may have been in style at the time, but soon after felt starkly out of place. Not only was the dining hall in disharmony with the other buildings on campus, but its design on the interior was lackluster, with west-facing windows that had to be covered during mealtimes because of direct sunlight and glare.

Led by Voith & Mactavish Architects, a renovation project sought to reimagine the Abbott Dining Hall, taking on the challenge of retrofitting the existing 13,000-square-foot space to match architectural details evident across the rest of The Lawrenceville School campus. It was important that the renovated dining hall achieve an interior that reflected the school’s rich history and tradition, and it was equally important that the direct sunlight dilemma be addressed. Marvin Ultimate windows, known for customization and quality, accomplished both.

“We pulled together a concept that combined a sacred space on campus and a senior experience in the dining hall,” said Sennah L. Loftus, associate principal at Voith & Mactavish. Taking inspiration from the campus chapel and the architecture of the dormitory that abutted the dining hall, Loftus’s retrofitted design took form.

Reminiscent of dining halls in schools with deep English tradition, the Abbott Dining Hall was transformed with plenty of rich mahogany wood and high ceilings. The former flat roof was replaced with a pitched roof and exposed wooden beams. Throughout, the culture of The Lawrenceville School was thoughtfully embedded in design details, including fireplaces carved with references to school lore, flags for each of the student houses, and a large “L” in the center terrazzo floor.

To solve the problem of the west-facing wall that would let in too much sun during mealtimes, clerestory windows were installed to harness natural light without glare. The addition of six alcove seating niches with custom mahogany wood windows, too, cut the directness of the sunlight. Intricate details within each Ultimate Casement Round Top window included the addition of 19 colorful stained-glass panes. The glass gave a nod to the various student house colors while shielding occupants from glare and still admitting filtered light.

“We have many different window types in the dining hall,” Loftus said. “The Ultimate Casement Round Top window, for example, is paired with an Ultimate Awning window underneath. A custom piece of trim was applied between the mullion of the two different window types, and we were able to customize the trim with carvings.”

Loftus said, “We've used Marvin for many projects. It's become my go-to for windows because of the price point, the durability, and the quality.” 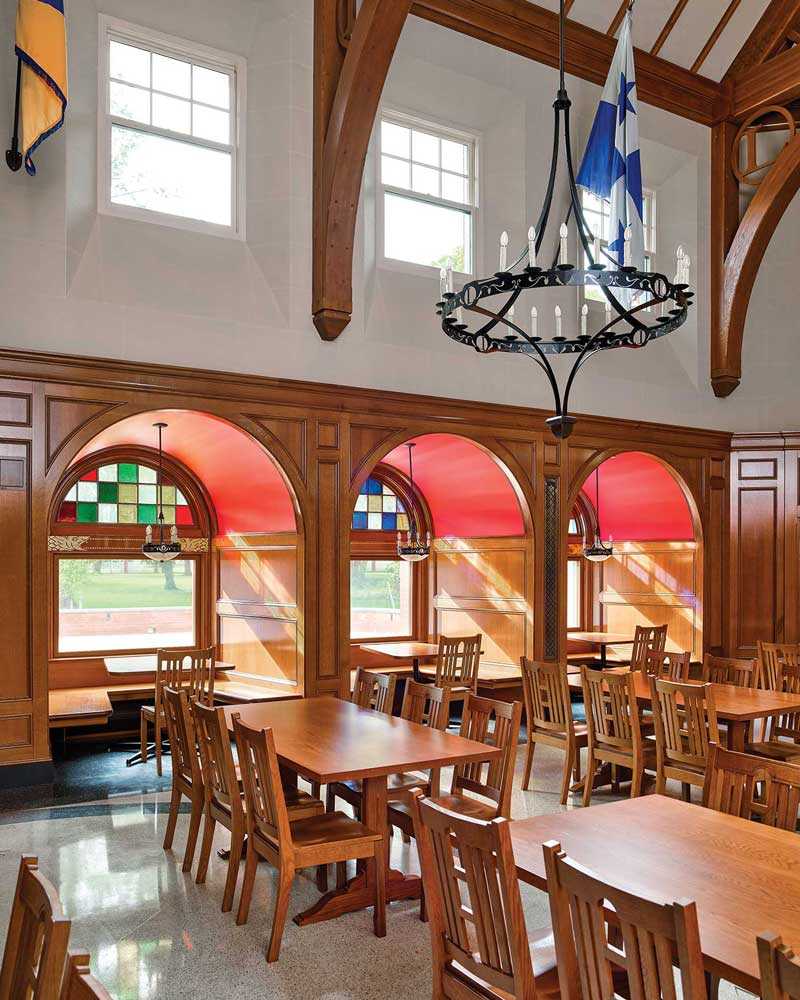 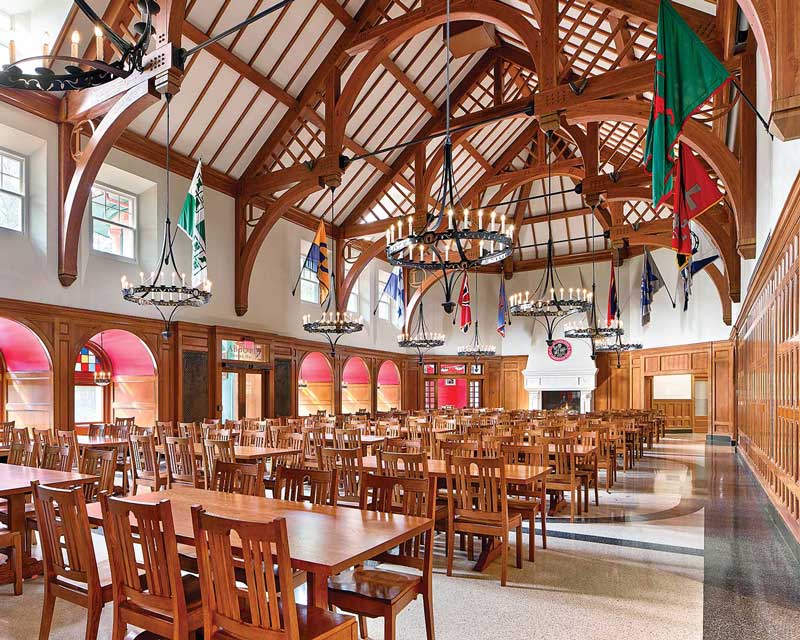