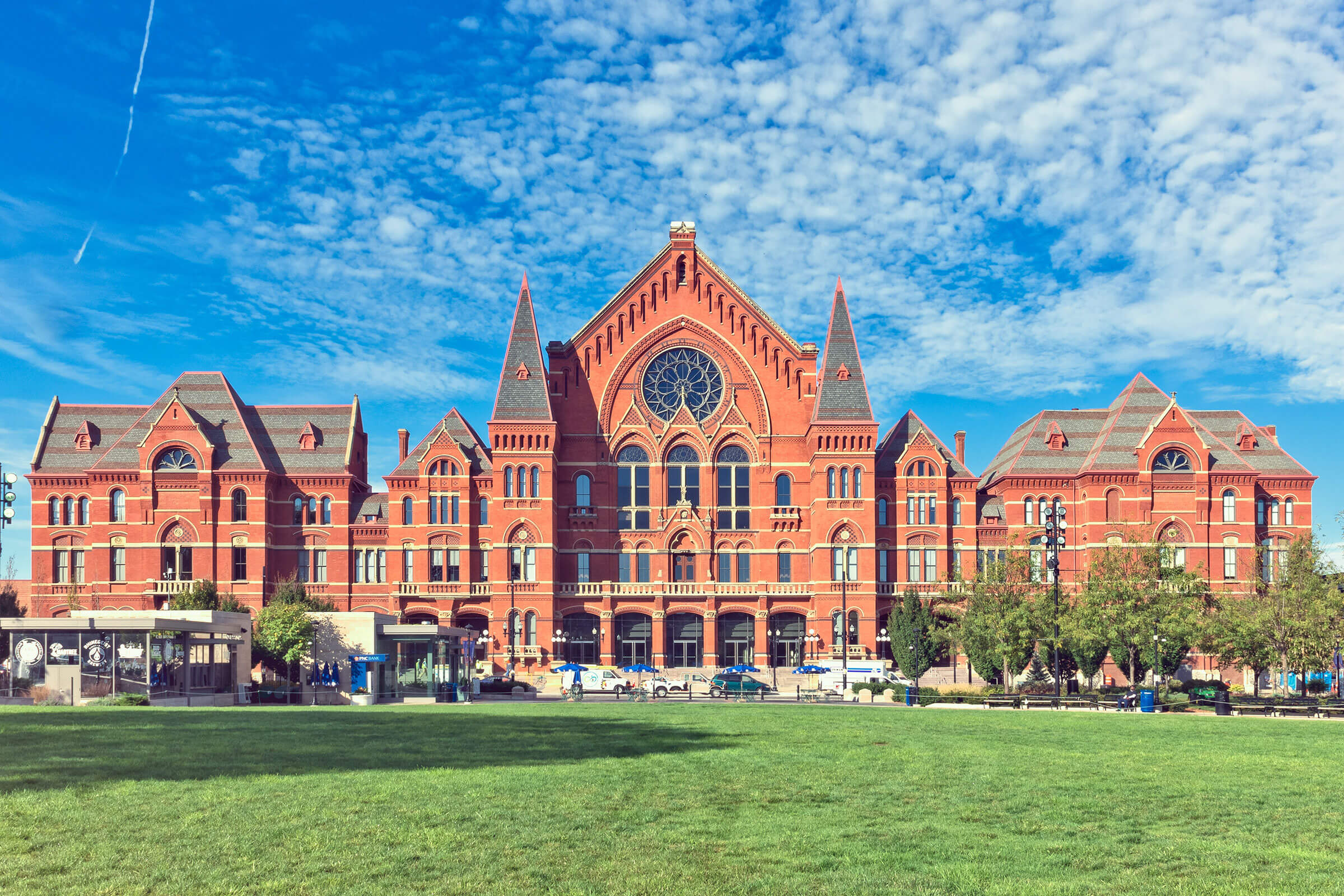 Originally built in 1878, the Cincinnati Music Hall reopened in October 2017 after a $143 million renovation that revived its former architectural glory and enhanced the audience experience. With its gabled roof, decorative brick work, and signature window tracery, the building is a prime example of High Victorian Gothic Revival style. It is one of only approximately 2,500 designated national historic landmarks, the highest level of historic significance that a building can achieve in the United States.


Designed by Cincinnati architect Samuel Hannaford, the multi-use hall boasts a storied history. Once one of the city’s grandest exhibition halls, the building has served many purposes. Over the years, it has housed a roller skating academy, a dance hall, a horticultural show, and a parcel post. Entertainers including Frank Sinatra, Miles Davis, Bruce Springsteen, and Prince have performed there. It hosted the 1880 Democratic National Convention, and multiple U.S. presidents, including Theodore Roosevelt, Dwight D. Eisenhower, Bill Clinton, and Barack Obama. It had been 40 years since its last renovation, and a combination of ongoing mechanical issues and structural deterioration meant the Music Hall was operating on borrowed time.


A mix of private funding and a $25 million historic tax credit from the state of Ohio funded its substantial renovation. With such a significant building at stake, the Music Hall renovation project required consultation from a team of experts, including architects, builders, historic preservationists, preservation associations, and historic window replication specialists.


The project complements larger ongoing efforts to revitalize the surrounding Over-The-Rhine neighborhood, one of the largest historic districts in the United States, which is in the midst of an urban renaissance thanks to funding from 3CDC (Cincinnati Center City Development Corporation, also a major partner of the Music Hall renovation). The Music Hall is one of Over-The-Rhine’s architectural crown jewels, presiding over blocks of well-preserved 19th-century brick Italianate and German Revival buildings.


“In any renovation project, the building kind of reveals itself to you,” said historic preservation consultant Judy Williams, who helped the project meet federal historic preservation standards. “You begin to learn more about its history and the architectural gems that are hiding within that haven’t been seen for a long time.”


The Music Hall certainly housed its share of hidden architectural gems, but some of its most distinguishing and exemplary features were blocked off or obscured from view. In Corbett Tower, located directly above the lobby, the team removed a drop ceiling that been added in the 1970s, concealing the building’s beautiful original ceiling. This nearly doubled the height of the room, from 16 feet to 30 feet, revealing the grandeur of the original building. Historic restoration firm EverGreene Architectural Arts, experts in ornamental plaster and decorative finishes, reproduced the detailed ceiling stenciling.


The ceiling wasn’t the only concealed part of Corbett Tower the team unearthed. During a renovation in 1927-1928, most of the music hall’s windows were completely removed and bricked in. There were a few places, particularly between the main hall and the north hall, where the renovators chose to leave the window in place and covered it using plaster on the inside and stucco on the outside.


“It was really quite amazing,” said architect Alan Weiskopf, AIA, Managing Principal at PWWG in Pittsburgh. “You would open it and say, ‘Oh my gosh, the window is there.’”


Though the decision to put bricks over windows seems puzzling today, it appears to have been in line with 1920s-era design choices, which did not necessarily prioritize access to daylight. Fortunately, the team behind the 2017 renovation felt differently.


“One of the objectives from the very outset of the project was to reopen as many windows as we could,” said Weiskopf. “We wanted not only to bring daylight into the public areas of the building, but we wanted the building to glow at night, through its windows as it did originally when it was built.”


The team exposed previously hidden windows that now look out on Washington Park, including a trio of transom windows beneath the building’s iconic grand rose window. “Those windows were completely special,” said Weiskopf, “and Marvin was able to recreate the original tracery pattern in those three transom windows.”


Replicating these decorative transoms so they would not only look historically accurate, but would also live up to modern performance standards, was a task made for Marvin’s historic team. The company has always approached historic replication with a strong focus on performance.


“The performance aspect is where Marvin leads,” said Chick McBrien, CSI, CDT, regional manager in the architectural division of Marvin. “Not only are we going to be able to build something that’s historically a great match, but we will be number one, performance based.”


Marvin’s extensive customization abilities were an ideal fit for the project. Tom Hodgson, a Marvin architectural project coordinator who worked on the Music Hall and has been working in Marvin’s Architectural Service Department for nearly 20 years, said, “Really, nothing’s off the table for us. Everything that comes across our desk, we approach with the attitude, ‘Yes, we can do this.’”


Armed with this can-do mindset, the Marvin team worked closely with builders, historic preservationists, architects, and other specialists to help navigate the complex guidelines a historic project like this one requires.


Upon learning that three Music Hall windows were covered by bricks, an anonymous patron insisted that they be opened and restored. She even offered to pay for them herself—over $50,000 per window by some estimates—since the budget had already been determined.


There was only one problem. Very few images existed showing what the windows originally looked like, especially with the level of detail Marvin needed to create historically accurate replications, and there were no large-scale architect drawings available. Working together, the patron and architects found one photo from the 1950s that did show the window details. “It was a black and white photo with these gigantic Pontiac Bonnevilles and Cadillacs that were ships more than they were cars,” recalled Ralph Ludwig, commercial project manager at Marsh Building Products, Inc., a local Marvin dealer. “But it showed the three windows before they were bricked up.” Ludwig, who has worked with Marvin products for 31 years, had history with the Music Hall—he was involved with furnishing the first 75 Marvin replacement windows in the secondary elevations during a 1989 renovation. Nearly two decades later, he teamed up with Marvin again for the latest renovation.


Marvin’s architectural team was up to the challenge. By digitally enhancing the photos, scanning them, and enlarging them, they were able to recreate the exact patterns on all three windows, reviving an intricate piece of history after decades. “The crown glory of it in my mind are really those three big windows in Corbett Tower, right underneath the large rose window,” said Paul Muller, AIA, who is executive director of the Cincinnati Preservation Association, a non-for-profit advocacy group for historic resources, as well as a member of the board for the Society of the Preservation of Music Hall (SPMH). “When they’re lit up at night, it’s glorious.”


Another hurdle in the window replication process was the variance in window sizes. Marvin supplied the Music Hall project with 103 total windows, of which approximately 90 were custom, and even two windows that appeared identical could have a ¼-inch difference in size. “In 1878, they built the openings and custom-made the windows to go to the openings; they weren’t accurate back then,” said Gary Millard, senior project executive at Messer Construction Co., who oversaw the construction of the Music Hall project. “With the tools we have today, we can get things more precise.”


Curtis Hoffman, project manager at Messer, recalls the moment he sent an Excel spreadsheet to Marvin with detailed window measurements. “Some of the windows were supposed to be a perfect half circle on top of a rectangle,” he said. “Sometimes our spreadsheet would be off a half inch, which would make it not a perfect circle. The Marvin technical services rep was able to go down through there and pick those little details out… doing so many of these projects, they were able to catch errors really fast. That definitely helped us out a lot.”


Working closely with Hoffman, Marvin’s Architectural Services team produced paper templates of each window for Messer’s team to insert in the openings and confirm that they would fit before construction began. This attention to detail and precision helped ensure that the windows fit exactly, eliminating waste and extra steps.


The experts involved in this renovation spoke highly of Marvin’s capabilities on this type of project. “In architecture, I use Marvin windows every chance I can, especially on historic projects,” said Muller. “Marvin was a great company to [work with] because of their long history with historic structures.”


The renovation not only brings some of the building’s best features back to life, but it also enhances the experience of seeing a performance.


The renovation of the Music Hall needed to accommodate a variety of performance and acoustic needs. Today, the Cincinnati Symphony and Pops Orchestra, Cincinnati May Festival, Cincinnati Ballet and Cincinnati Opera all perform there, and each company has different acoustic, seating, technical, and lighting requirements.


“The driving force of doing this was to get a symphonic hall that reflected more modern ideas of enjoying a symphonic performance,” said Muller. “It’s bringing the orchestra forward into the same space with the audience, [creating an] acoustic experience that is much richer, more direct, [and] amplified.”


By bringing the back walls of Springer Hall in about ten feet and reducing the total number of seats by approximately a thousand, the renovation brings the audience physically closer to the music, helping them connect better with performances. Additionally, seating was upgraded for modern comfort, offering more legroom and seat width, and the entire building is now fully accessible for guests with disabilities.


Today, when the Music Hall hosts Cincinnatians for performances, it brings them together in a spectacular space awash with beauty and history. The renovated Music Hall helps revitalize its surrounding community, upholding historic craftsmanship and honoring the past while looking forward to an exciting future. “[Historic projects] end up being beautiful pieces of the community when you’re done,” said Hoffman.


Hoffman’s colleague Gary Millard, senior project executive at Messer, echoes this sentiment. “The appreciation for what people did 150 years ago and the construction methods they had... they were able to accomplish with a lot less than what we accomplish today,” he said. “To see some of the craftsmanship and be able to restore that and supplement that from a professional perspective… Being a large, civic community space for Cincinnati, you get a sense of pride of [not only] what our team accomplished, but what all the craftspeople on site accomplished.” 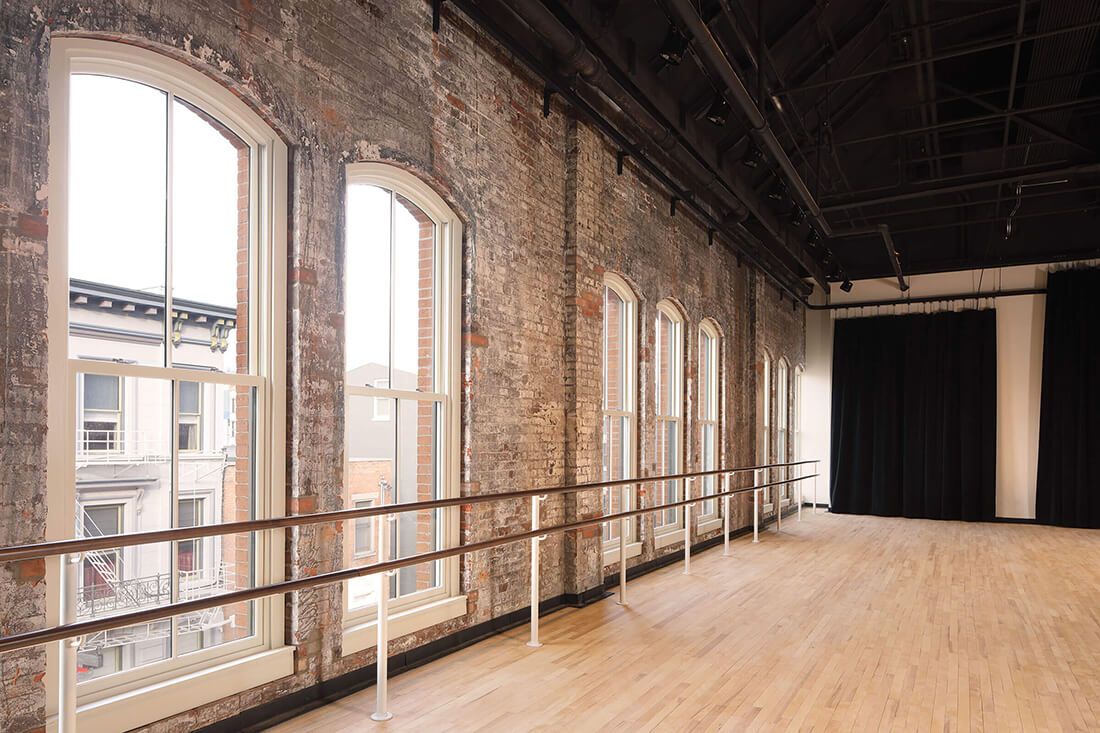 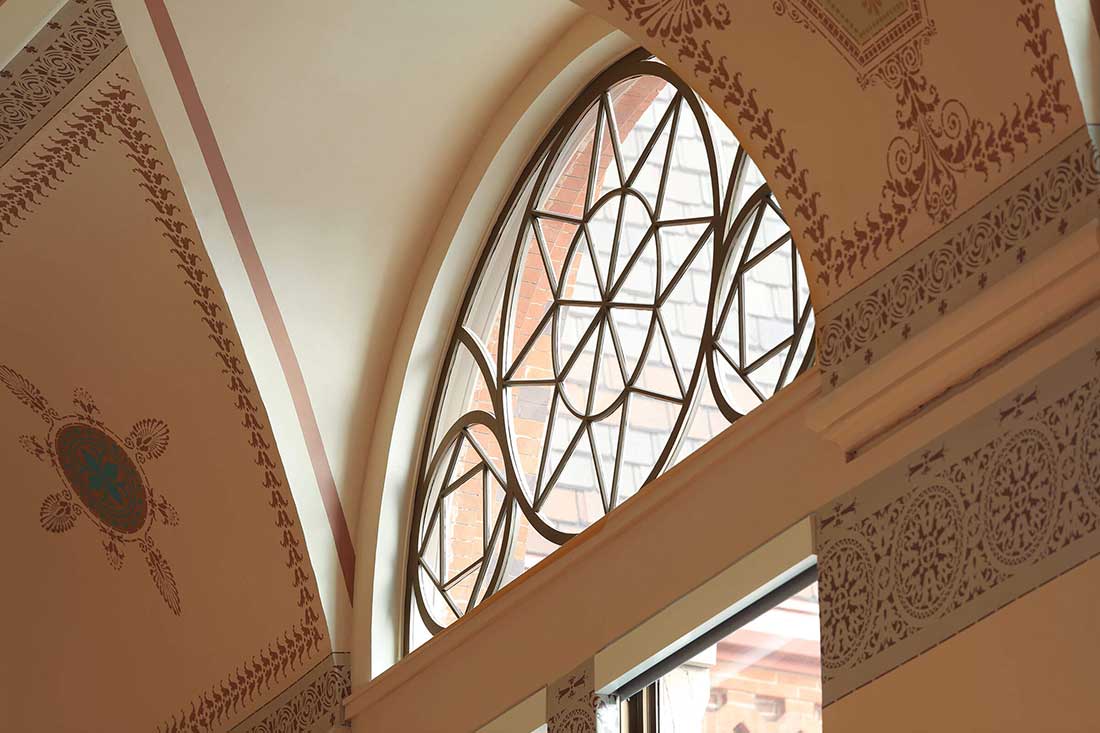 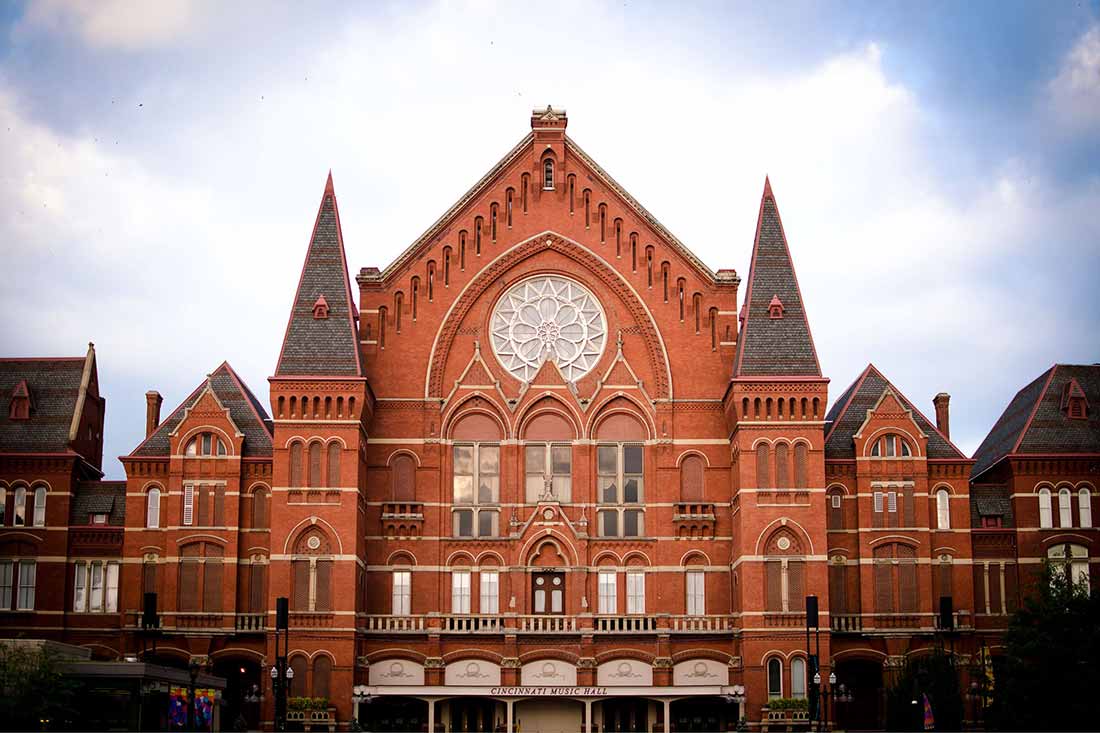