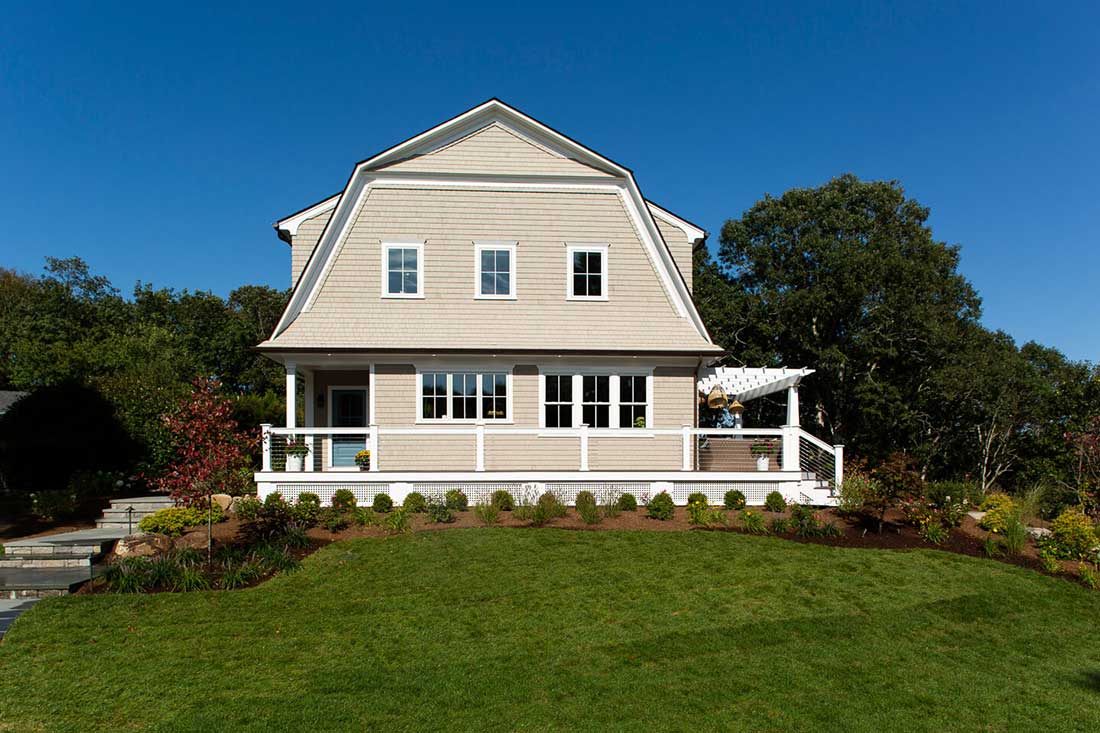 
Shayla and Scott Adams were thrilled when they heard the news that their extensive remodel project in Westerly, Rhode Island was going to be immortalized on the 41st season of This Old House. The couple had already purchased a 1949 ranch home about a mile from the ocean in Westerly, Rhode Island. The setup of the home wasn’t quite right for them and their two kids, but the location was a perfect fit and they saw so much potential.


Enter Tom, Norm, Kevin and the gang, who worked with contractor Jeff Sweenor, of Sweenor Builders, to achieve an amazing transformation that would make the home an ideal haven for this family of four.


The plan was to transform this low-profile ranch-style home into a towering gabled-roof Dutch Colonial. It’s a transformation that makes sense stylistically, considering ranch-style homes were born on the West Coast, while Dutch Colonial architecture was made popular in America by German and Dutch immigrants in the 18th century and this style of home is still found primarily in northeastern states. The very name “Rhode Island,” which means “Red Rock,” is credited to a Dutch trader. When the project was complete, there were no signs of the existing ranch, and the new home looks like it’s been proudly standing in place since the signing of the declaration. 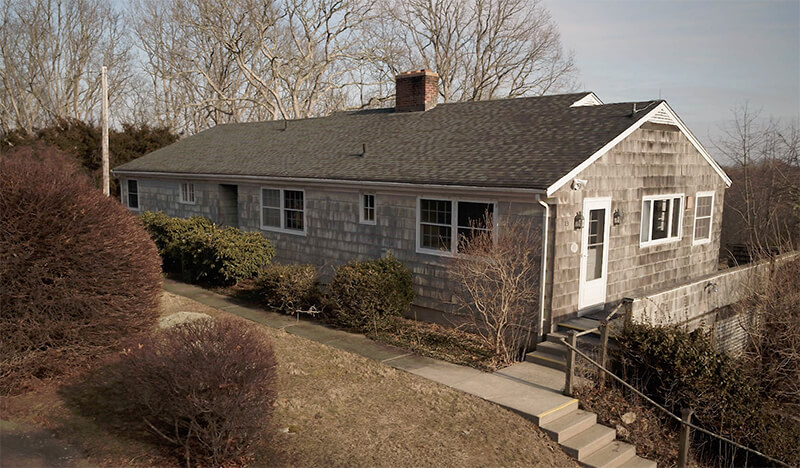 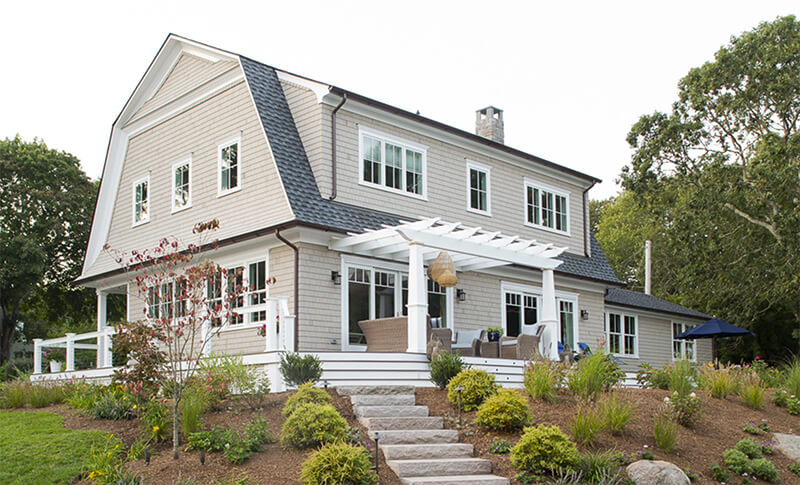 The existing house was built in 1949, and the same family lived in it until it was purchased by Scott and Shayla. In this remodel, the foundation and basement were all that remained. Even the main floor walls were razed to make room for taller walls that would provide more headroom on the main floor. A little extra ceiling height allowed for tall sliding patio doors and larger windows to allow natural light to bathe the areas where this family spends most of their time. The second floor added another 1,225 square feet and an opportunity to take full advantage of the ocean views that were missed in the first build. 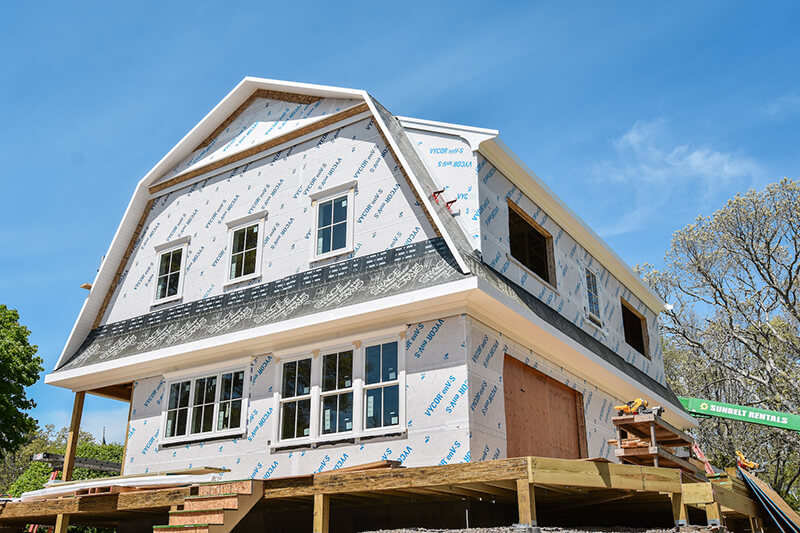 At the start of the project, the Adamses did not fully realize how magnificent the views were that they had access to. While the crew was working on the second floor, Shayla and Scott visited the job site and climbed up to investigate. What they saw was a stunning, sweeping view of the ocean. It was at this point that they decided to add more windows to the second floor to bring in natural light and water vistas. 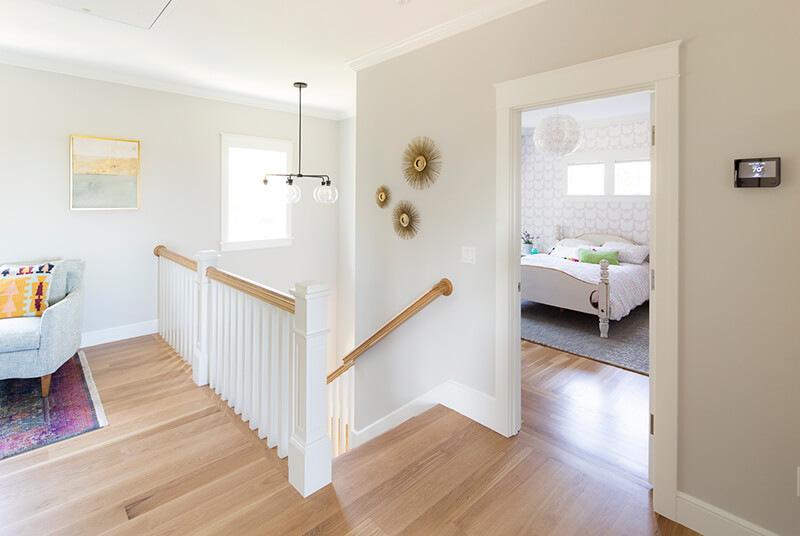 Scott says, “They were actually framing the exterior walls, I asked Jeff, our contractor, is there any way we can expand this window package up here? It was definitely the right call to make.” 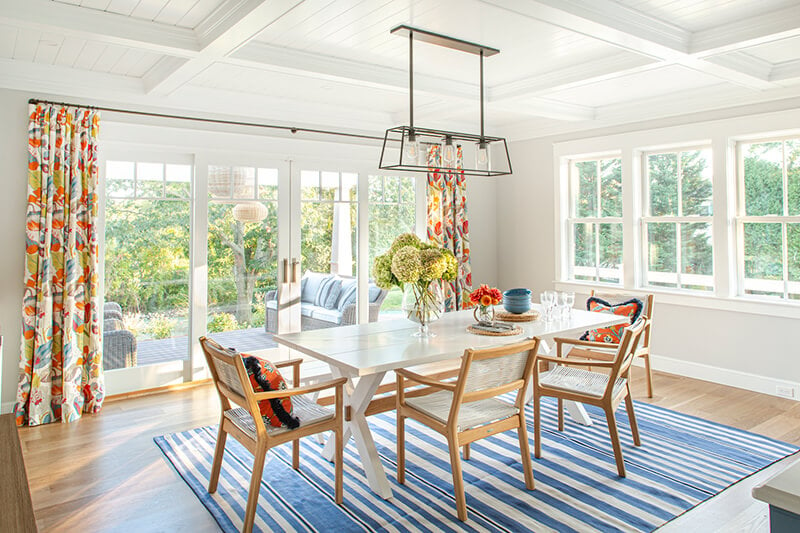 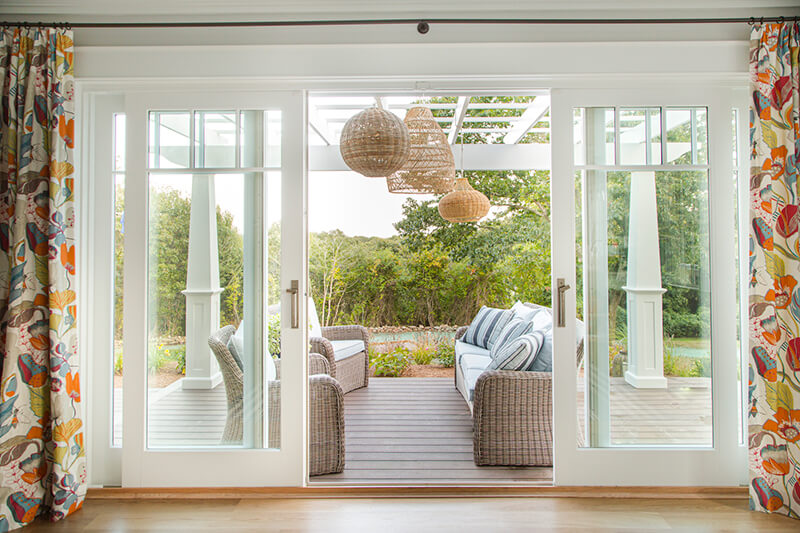 The couple chose Marvin to supply the windows and doors for their Westerly house.


“With the help of our contractor, we went to a Marvin Showroom and had a great tour. They broke down the product and gave us some options of material choices. We were really impressed with the quality of the product and the feel of the hardware,” says Scott.


In addition to adding windows on the second floor, they created two large, 13-foot openings that lead out onto outdoor living spaces. They filled the openings with two four-panel sliding doors that capture light all day long and create seamless transitions between indoors and out. 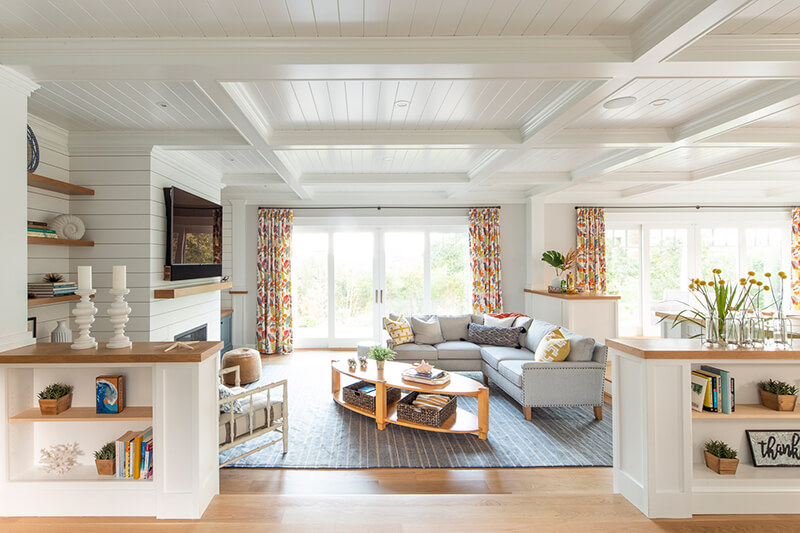 The Adamses chose Marvin Elevate windows, which are wood to the interior and fiberglass to the exterior, a durable, low-maintenance material that can easily withstand the harshest weather the northwest can dish out. They complemented these with Marvin Signature Ultimate Sliding French Doors, which feature an extruded aluminum exterior finish. The wood interiors were painted white at the factory and have a consistent, matching finish despite being from different product collections. 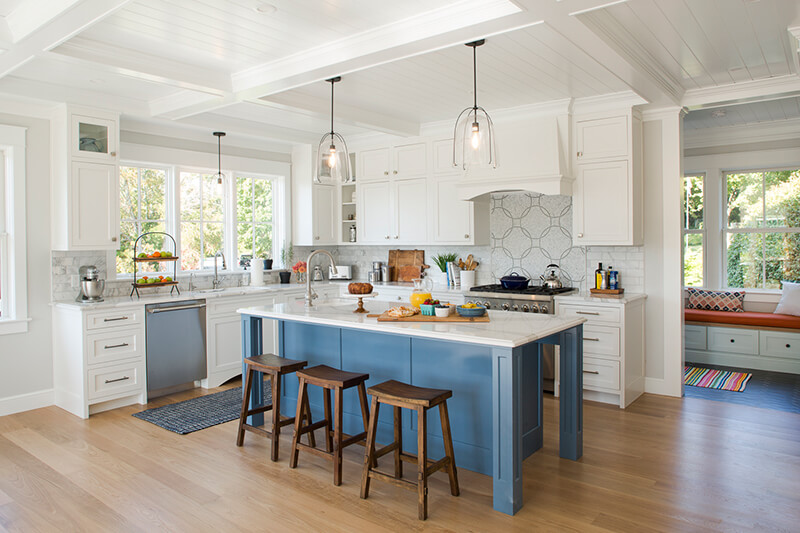 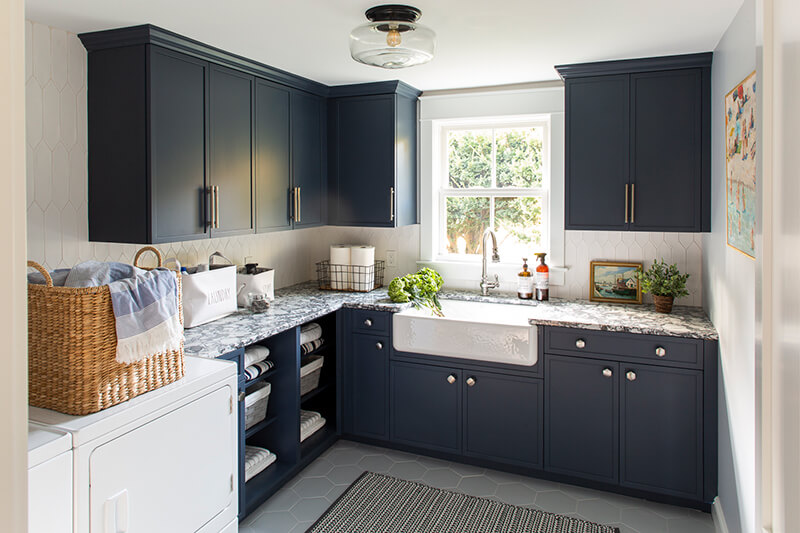 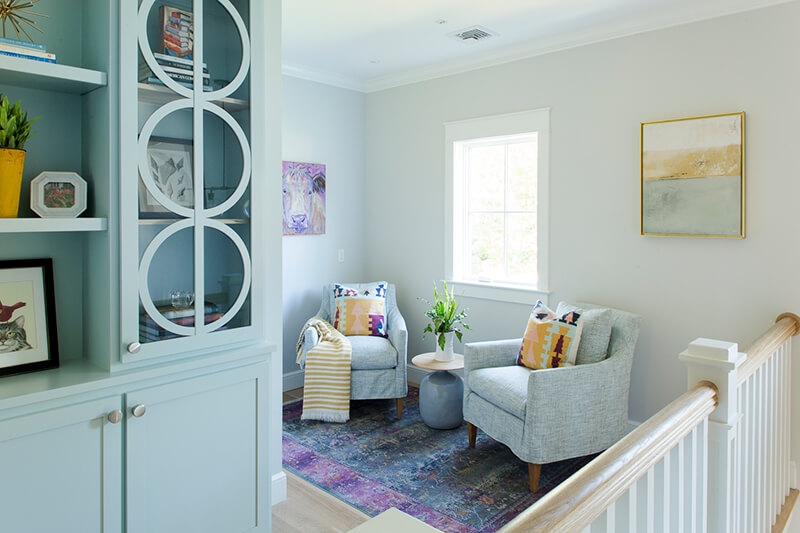 Because of the home’s proximity to the ocean, all 37 windows and doors needed to withstand gale-force winds and flying debris generated by hurricanes, so they all were fitted with impact resistant glass.


The exterior transformation was incredible. The gambrel roof line, flared eaves, cedar shingle siding, and window divided lite patterns all come together seamlessly to create the Dutch Colonial look the couple was after. 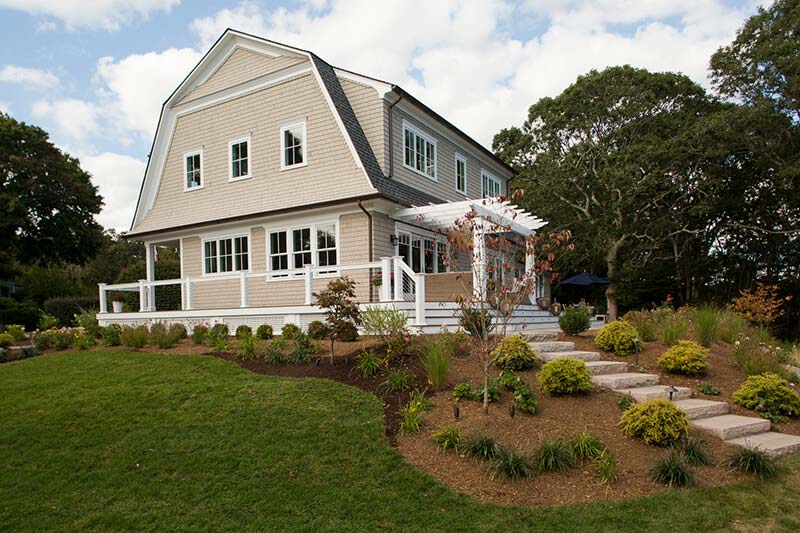 “Moving in was amazing,” Shayla says. “Being in such a big open space with so much light coming in. It was great.”


And the new homeowners can’t get enough of the scenery.  “The ocean-side views are better than expected.” Scott says, “We don’t close the blinds. It’s nice being able to wake up in the morning and see some pretty incredible views here.” 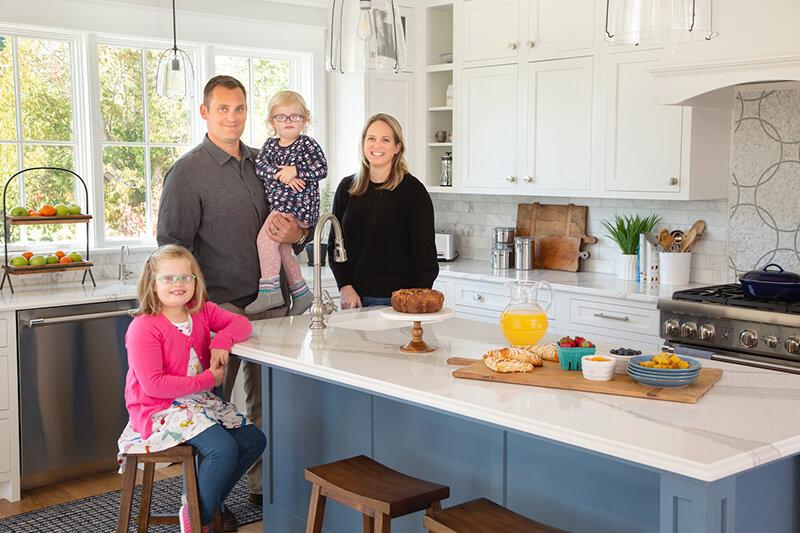 The whole project took about seven months to complete and was captured on 12 episodes of This Old House. Scott and Shayla couldn’t be happier and look forward to raising their daughters Marlin and Emily in their beautiful new home and in the same ocean-side community where they spent many summer days on the beach when they themselves were kids.