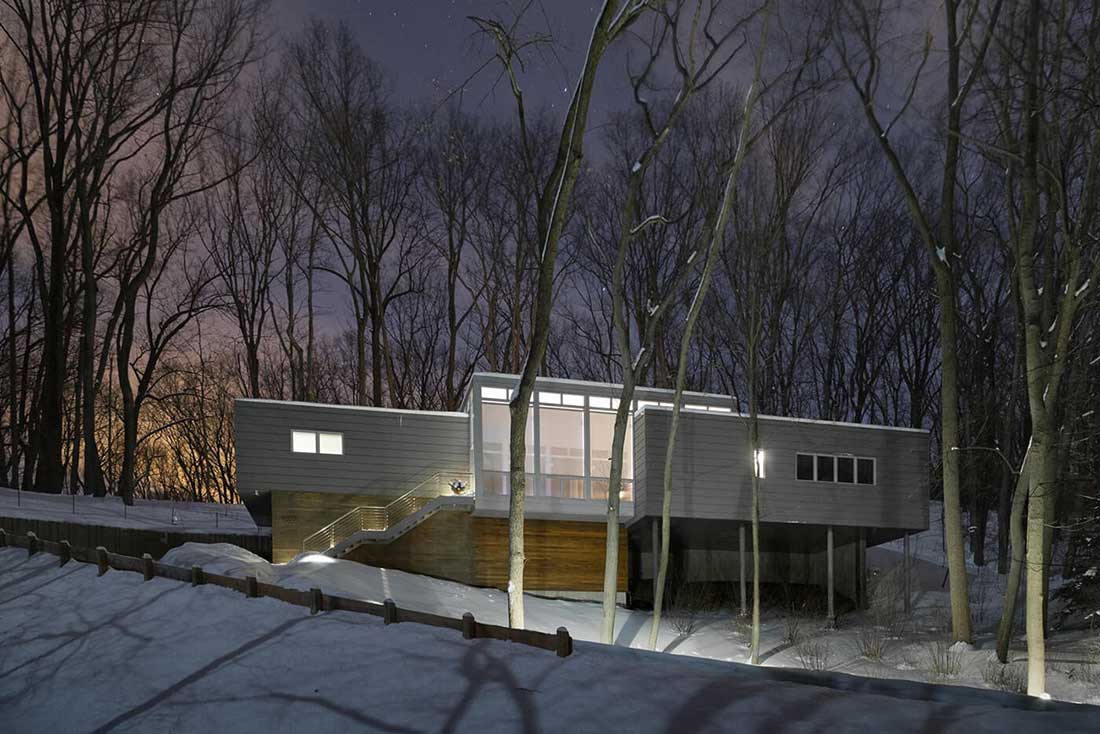 This Glowing Glass Haven Beckons the Outside In

Inspired by the idea of a glowing lantern tucked into the hillside, the owner of this Woodland Dune house worked with her architect to create a unique, functional and inviting home.


When Kate Bensen set out to build her family’s vacation home on the dunes surrounding Lake Michigan, she had a vision for what the structure could be—something private and secluded, a real retreat from city life. Most importantly, she wanted the space to be a beacon of warmth and hospitality, beckoning friends and family alike. “I wanted a house that glows in the woods at night,” she said.

“I wanted a house that glows in the woods at night,” homeowner Kate Bensen said of her home on Woodland Dune. With that direction, architect Scott Rappe worked to bring the glowing vision to life. 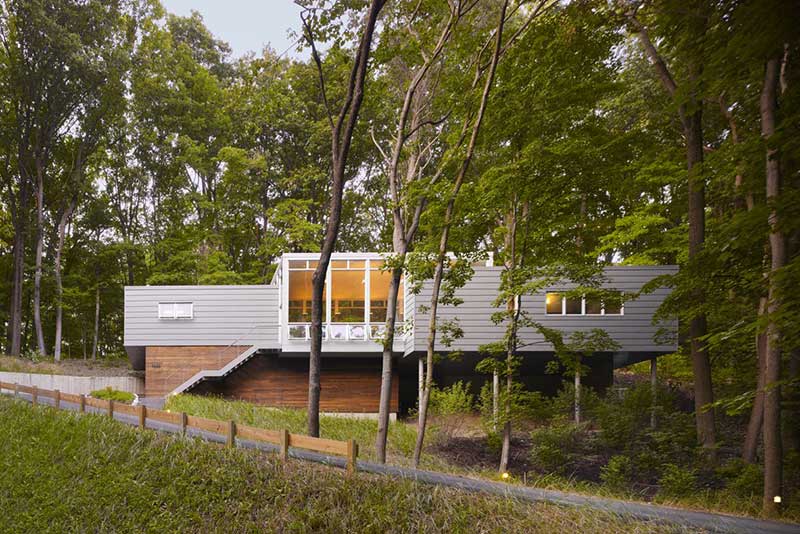 The house, which sits on a long, skinny footprint hugging the dune’s steep slope, is made up of three separate sections—two sleeping spaces connected in the middle by a living space.


This is what she told her architect, Scott Rappe of Kuklinski+Rappe Architects, when he came on to the project. “When you said that, the idea of a glowing Japanese lantern popped into my mind,” Rappe said to Bensen in our conversation with the two of them. “I remember that distinctly.”


Rappe was devoted to bringing Bensen’s vision to life, and relied on Marvin windows and doors to create a nearly seamless glass volume, tucked into the Woodland Dune.


Benson’s home sits on a long, skinny footprint, hugging the steep slope of the dune. Rappe let the building site guide him in the design process, and created a long, narrow home made up of three separate sections—two sleeping spaces connected in the middle by a living space. “My one request was that our guests would be separated from us,” Bensen says, thinking back on the building process. She wanted to create privacy for her guests and for her family, but also offer a shared space to come together. Rappe accommodated by placing the two bedroom areas on either side of the house. “That middle piece had to be glass,” says Rappe, explaining that the glowing central pavilion balances the three, perfectly proportioned volumes while maximizing the stunning, wooded views. 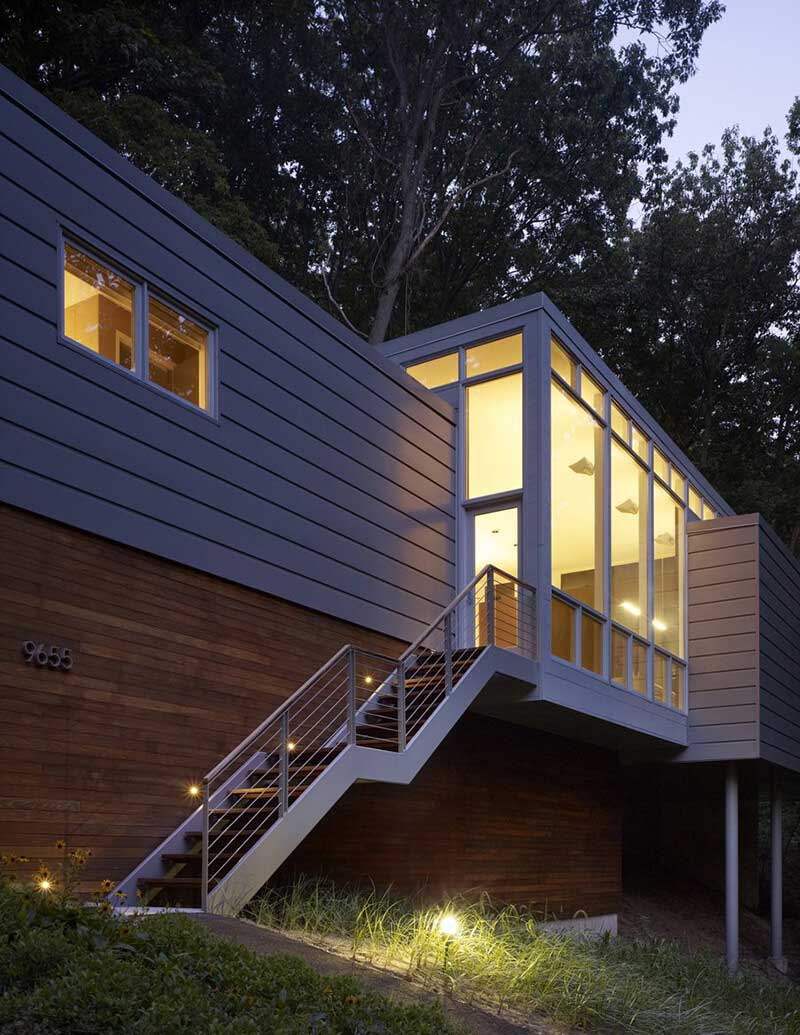 “That middle piece had to be glass,” says architect Scott Rappe, explaining that the glowing central pavilion balances the three volumes while maximizing the stunning, wooded views. 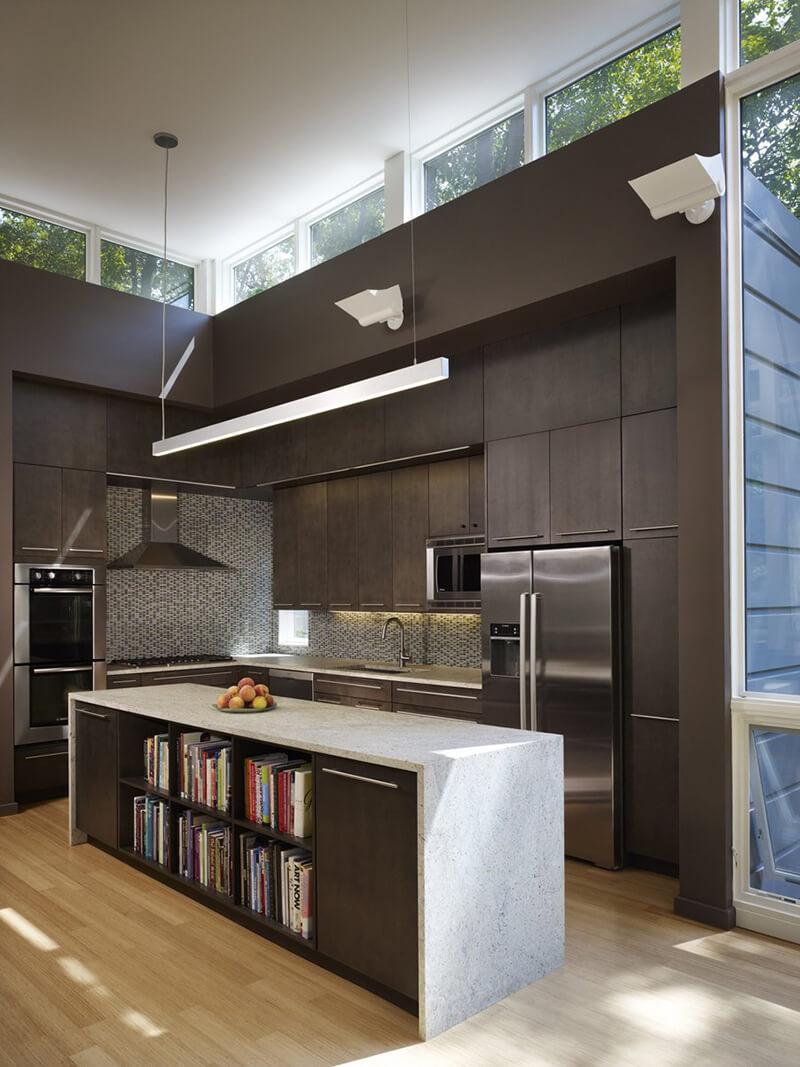 “We wanted a house that would be very easy to be in,” Bensen says. The home feels peaceful and zen-like to Bensen, who tries to spend as much time as possible in this second family home. 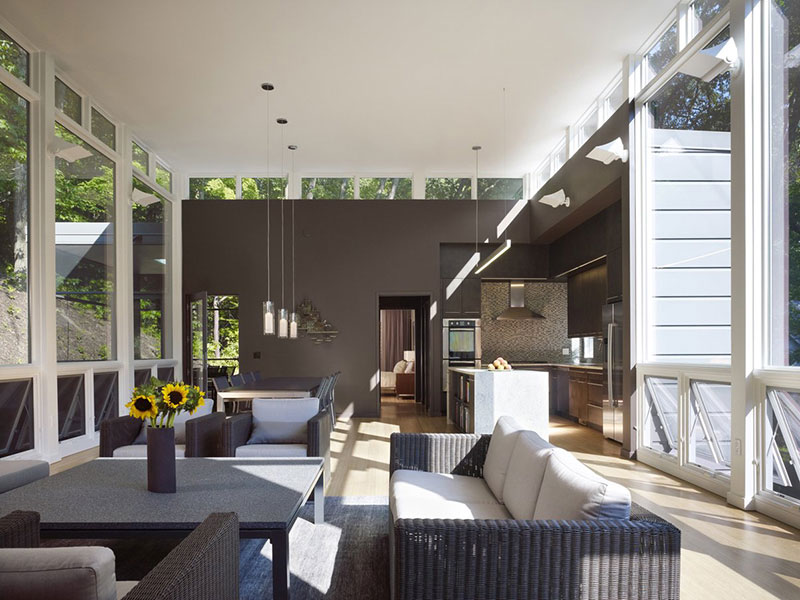 Bensen’s house prioritizes gathering space. “The bedrooms are ancillary,” she says. “The house is designed to make it easy for people to want to gather.”


“We wanted a house that would be very easy to be in,” says Bensen. “The philosophy was that the common area is a gathering place for people. The rooms are ancillary. The house is designed to make it easy for people to want to gather.” Her home’s design lends to its function, often filled with guests at all ten seats of her dining room table. The Woodland Dune House has itself become a metaphor for Bensen’s open, hospitable spirit. “It’s all about good flow that brings the outside in,” she says of the home’s design. 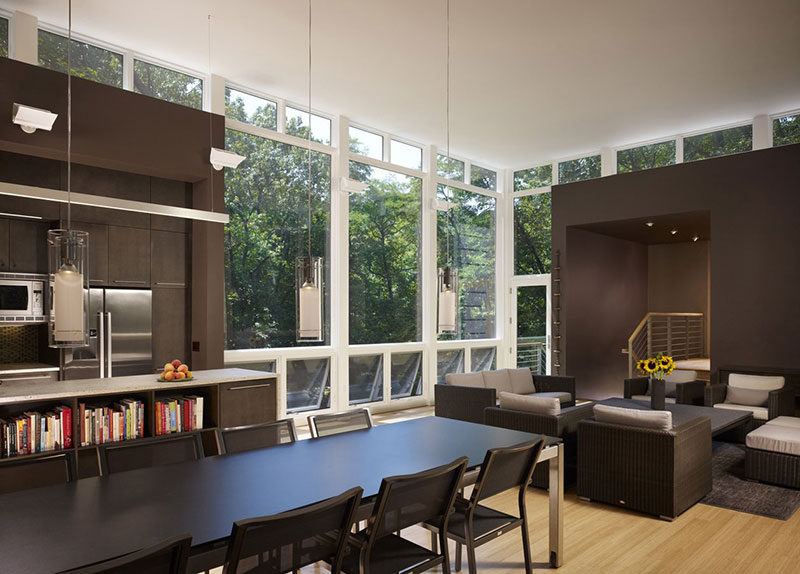 Bensen always wanted a large dining table that seats ten people. She made sure there was room for one at the Woodland Dune house, and often, all ten seats are filled.


One way the house welcomes outsiders in is through the middle module’s floor-to-ceiling windows. “The mullions between the windows are engineered to be as narrow as possible [about five inches] so the glass could be expansive,” says Rappe. He built the space considering every angle, making sure even those who are seated have uninterrupted views of the woods. “The precision and level of detail was high,” Bensen recalls. Rappe relied on Ultimate Awnings, Casements and Inswing French Doors from the Marvin Signature Collection for the home’s construction, and was able to easily customize the large format panes for the project’s needs. 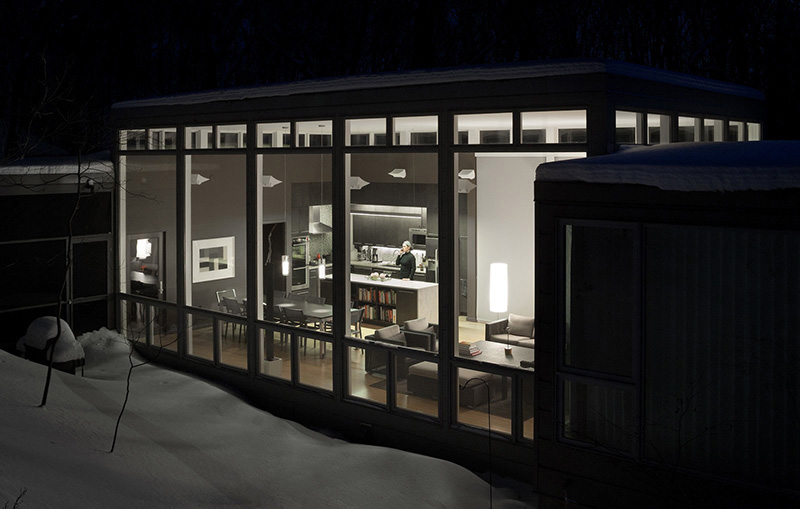 One way the house welcomes outsiders in is through the middle module’s floor-to-ceiling Marvin windows. “The mullions between the windows are engineered to be as narrow as possible, so the glass could be expansive,” says Rappe.


Now, seven years after the home was completed, Bensen and her family find themselves at the Woodland Dune house as much as possible. “I sit through Friday traffic just to get two nights at the house instead of one on the weekends,” she says. Bensen’s favorite spot in the entire house is an armchair in her living room overlooking the side of the dune. It was in that spot, in one of the early days in the new home, that she picked up the phone and called Rappe. “‘Why is this house so zen-like?’” she recalls asking him. Rappe’s very intentional proportions play a large role in the home’s peaceful vibe, but Rappe also credits the beautiful, wooded plot. “It’s a wonderful ecological area,” he says. “Because it’s on a Great Lake, the dunes are particularly beautiful.” Rappe did as little excavation as possible on the dune to maintain the surrounding woods.

Bensen’s favorite spot in the entire house is an armchair in her living room overlooking the side of the dune.


Rappe’s functional, human-centered design for the Woodland Dune home—complete with floor-to-ceiling Marvin windows—serves to fulfill Bensen’s primary vision for her home as a glowing lantern. The home seems to be metaphor come to life—a glowing glass structure welcoming outsiders in and illuminating the beautiful surrounding area for all to enjoy.