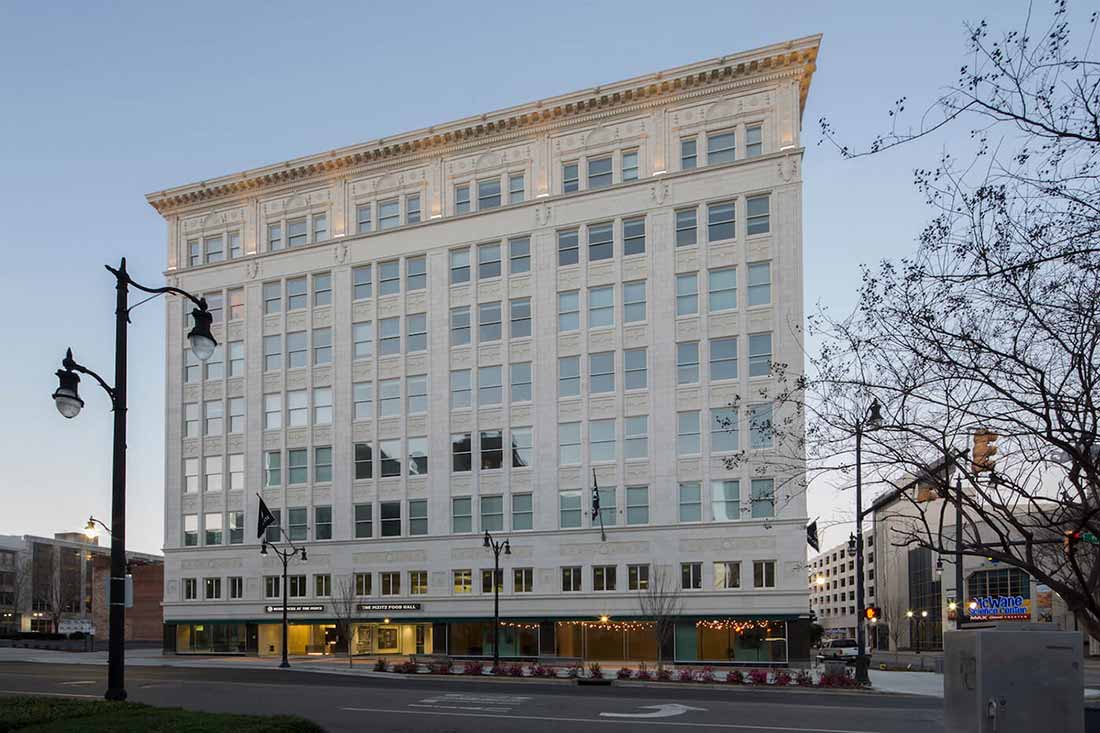 The Pizitz Lives to Tell its Tale

A landmark department store gets a new life, with its unique historic character intact.


Completed in 1925, the Pizitz was home of the eponymous landmark department store owned by Louis Pizitz, a Jewish immigrant who turned a modest dry goods mercantile into a regional retail empire. Pizitz was known as a generous and charitable businessman, as famous for his altruism and philanthropy as he was for his business acumen. He was a true pillar of the community, and his flagship department store in the heart of downtown Birmingham occupied a warm, fond place in the hearts and minds of residents. Not too unlike Macy’s in its heyday in New York City.


After the sale and dissolution of the Pizitz department store in 1986, the building was finally shuttered in 1988. It would sit vacant and abandoned for the next 25 years. In fact, it fell into such a decrepit state of disrepair that covered walkways were installed around the perimeter of the building to prevent rotted sashes from falling out of window openings onto pedestrians. In 2012, after multiple failed attempts to rehab the building, the successful acquisition of historic federal and state tax credits galvanized the effort to bring the Pizitz back to life.


The project was undertaken by architect Marcel Wisznia and project manager Jules Lagarde of Wisznia Architecture + Development, in association with KPS Architects. Together, they took on the enormous task of rehabbing one of Birmingham’s most iconic buildings. A major aspect of this remodel was the replacement of the building’s 252 double hung windows and 52 pairs of casement windows with new custom Marvin windows.


Because of the building’s historic designation and the use of tax credits to supplement and monetize the funding, the windows had to meet the strict approval of the National Park Service (NPS) and the State Historic Preservation Office.


Following an open bidding process, the window contract came down to two manufacturers: Marvin and a competitor. Both were close on price, but Marvin separated itself with the ability to match the fine details and particular design quirks of the original historic windows while meeting the functional and performance mandates of modern commercial building codes.


One major point of separation between Marvin and the other window manufacturer was the custom extruded exterior profile and frames Marvin was able to manufacture to match the originals. For historic projects like this one, the NPS will give a little leeway in matching existing. Marvin was able to match the depth of the frame within the razor thin tolerances allowed by the NPS.


“It gets down to minutiae,” Legarde said. “The Park Service didn’t want to give more than a quarter-inch, and Marvin just got it.”


One of the biggest challenges with recreating the Pizitz windows was balancing the functional requirements of contemporary building codes with the historic aesthetic demands of the NPS. Despite having to account for thermal performance, wind resistance and the inherent added thickness of modern insulated glass, Marvin was still able to create a sash that very closely matched the originals in size and thickness, preserving the all-important sightlines.


Because there was little to no uniformity in the size of the fenestration, each window had to be custom-built with an extra-thick frame to account for the 15-inch-thick masonry and terra cotta walls. In total, Lagarde estimates that there are between 10-15 different sized windows in the building, with the sizes decreasing from the top down. On the top levels of the building, some of the windows measure as large as five-feet wide by eight-feet tall.


“The windows were seamless,” Lagarde raved about the experience with Marvin. “Everything went as planned.”


The Pizitz is the perfect example of how—when done right—the revitalization of a single building can be so completely transformative and important to the community that it’s enough to revitalize an entire neighborhood. Today, the area around the Pizitz is thriving—dotted with vibrant eateries, retail and the buzz of human activity.


When the Pizitz closed its doors in 1988, a rich chapter of Birmingham history appeared to have ended as well. But thanks to the dedication of those involved, it wasn’t the end—it was just the beginning of a major comeback.


The Pizitz Hotel project was the Best Historic Winner in the 2018 Marvin Architects Challenge.