Lifestyle influencer Liz Joy turns a fixer-upper into a chic oasis for her family of five.

When it comes to filling their life with all that they love, for Liz and Brian Joy the sky’s the limit—literally. The first thing the couple did to a fixer-upper in a Connecticut shoreline town was raise the roof. So began a nine-month remodel and replacement project that transformed a nondescript Cape into a sparkling multi-story house tailor-made for the couple and their three children, ages eight, six, and one. On a raised foundation, the house already met floodplain elevation requirements, which was part of its appeal. In addition, Liz cites other, more emotional factors that clinched the deal. “What really made our decision easy was the neighborhood,” she says. “We can walk to school, the beach; there are lots of families with young kids. It’s like stepping back in time.” 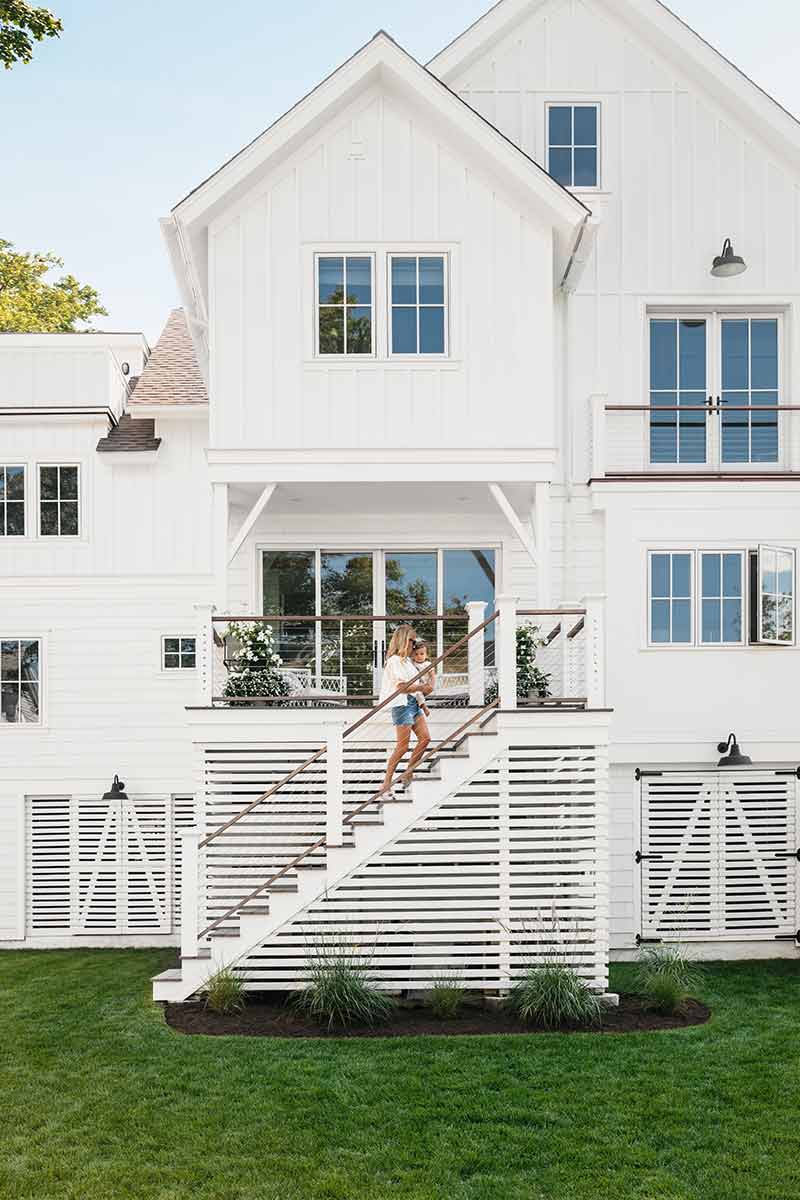 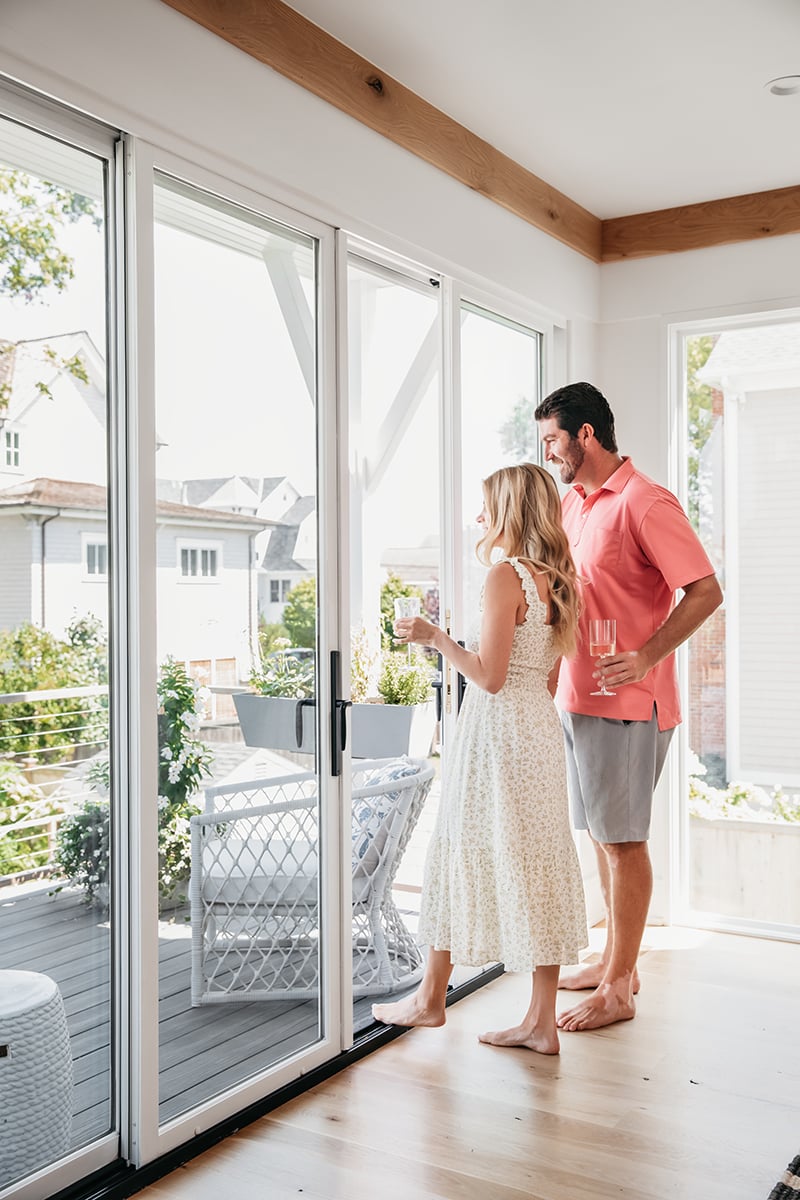 The neighborhood rhythm may recall the 1960s, when kids played outside until dinnertime, but the clean-lined, airy house most assuredly reflects what’s trending here and now. The four-bedroom, year-round residence with a guest suite in the finished attic was inspired by its seaside location, modern farmhouse stylistics, and even by low-country aesthetics. Clad in cedar shakes and board and batten, the house has two small sitting porches, front and back, which were added to the design following a trip to Palmetto Bluff, South Carolina.

“Liz’s dream was always to settle in Fairfield,” says Brian, whose decision to leave a corporate job in New York City spurred their move 15 miles north from where they lived in Stamford. Now, Liz and he are partners in a business aptly named Pure Joy Home, which stems from a lifestyle blog Liz launched in 2009. Originally a hobby, Pure Joy Home now counts 325,000 Instagram followers. The feed is filled with Liz’s wide-ranging inspirations—the beauty she sees in the people, places, and objects around her. 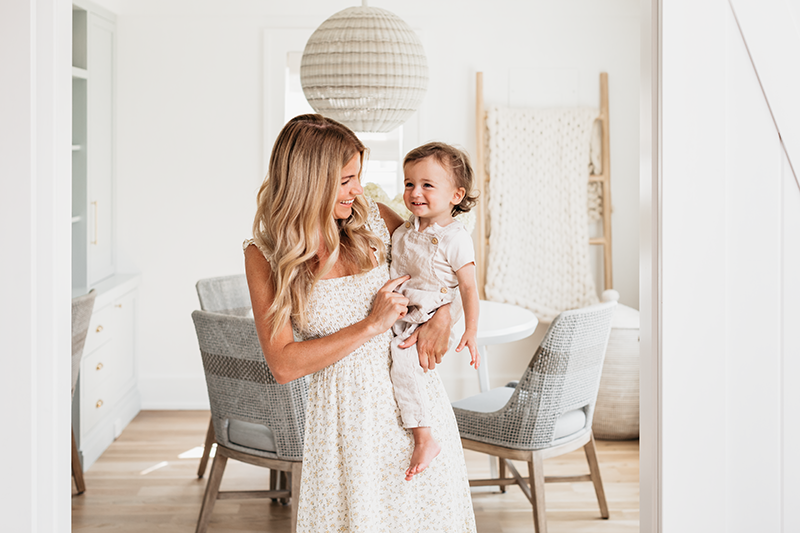 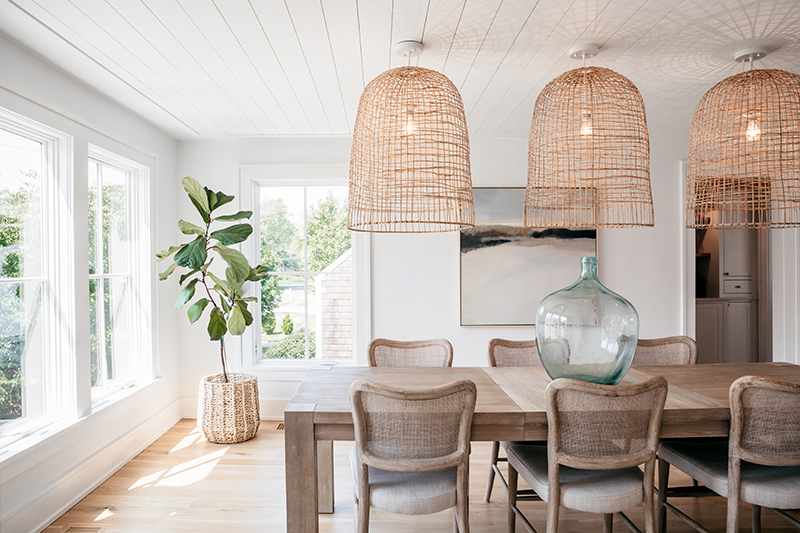 Since April 2020, when the Joys’ home renovations started (and, coincidentally, when their third child was born), the couple has documented their progress on social media. Updates included special shout-outs to, and cameo video appearances by, contractor Anthony De Rosa and architect Christian Rae Studio. “The house transformed from a small Cape to a wide-open floor plan with higher ceilings, four stories, and water views,” observes De Rosa.

Central to the design was “an open feel throughout the home that’s in keeping with the friendly beach community,” notes the builder. “Liz and Brian were fantastic clients who knew what they wanted. At the top of the list were the windows and doors. There was much deliberation over a black versus a white exterior window. Ultimately, they went with the white and have several accents around the home in black.” 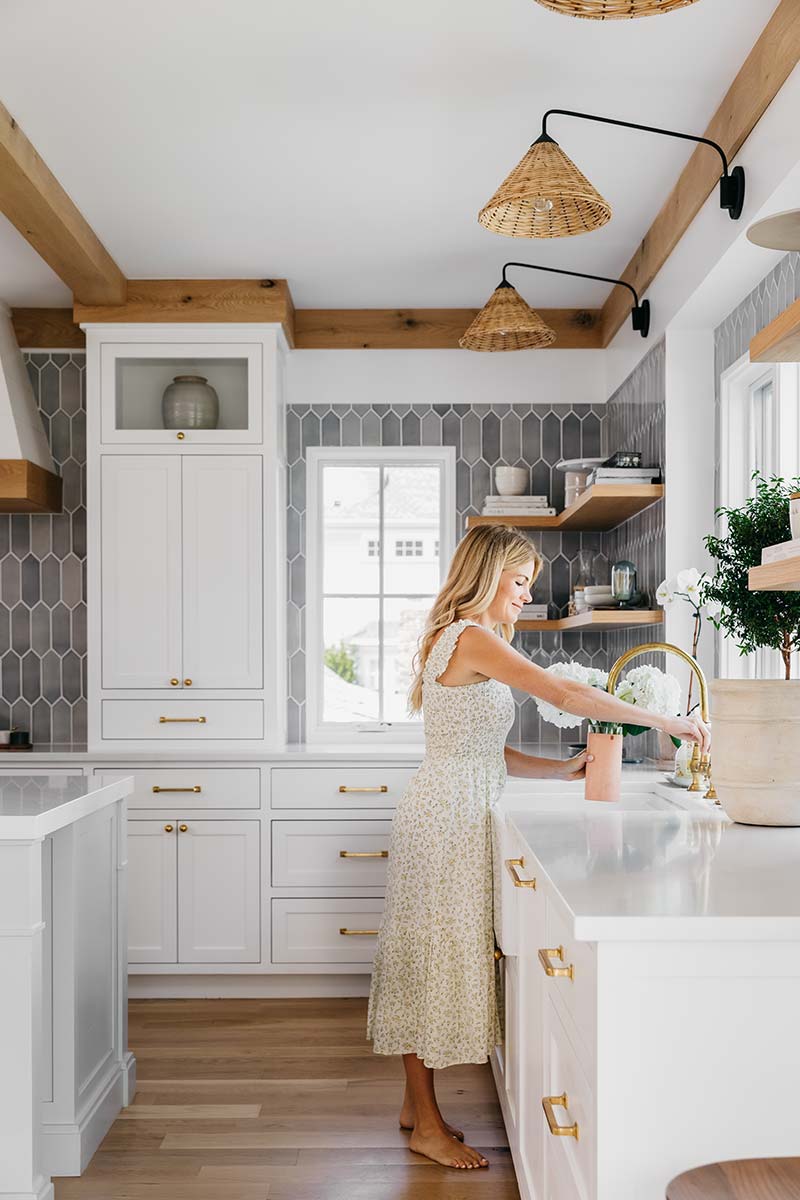 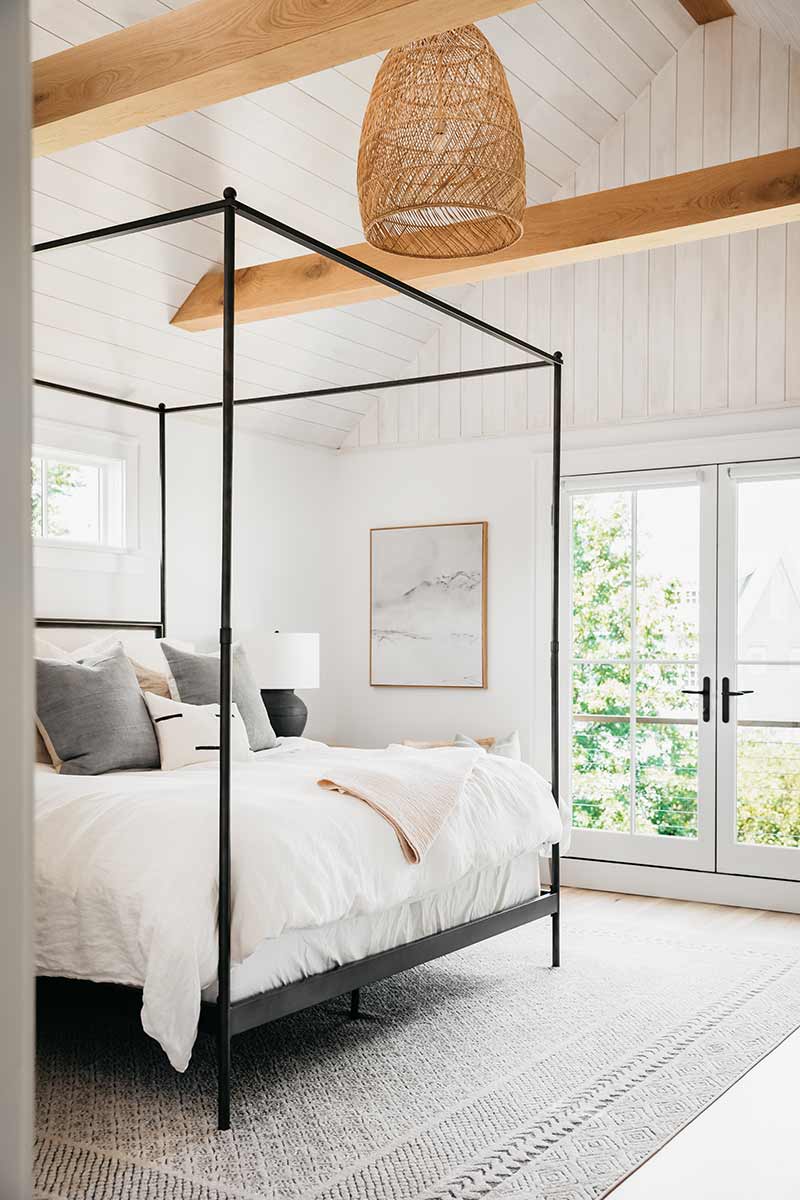 The interior palette and finishes express a collaboration between Liz and Gayle Dudley of GLDesign, which was a fun, comfortable process for the two women with similar tastes. “We were really in sync on all decisions and had so much fun together," says Liz. “I just wanted a happy, very natural and organic coastal vibe.”

With shiplap walls painted “Chantilly Lace” by Benjamin Moore and character white oak floors, the stage was set for Liz to do what she does best as a social media influencer: create attainably stylish living spaces that inspire others. First and foremost, she “wanted to flood the house with light.” Guided by their builder, for windows and doors they sought the advice of Len Volpe, an outside sales representative for Connecticut –based building materials supplier Ring’s End. 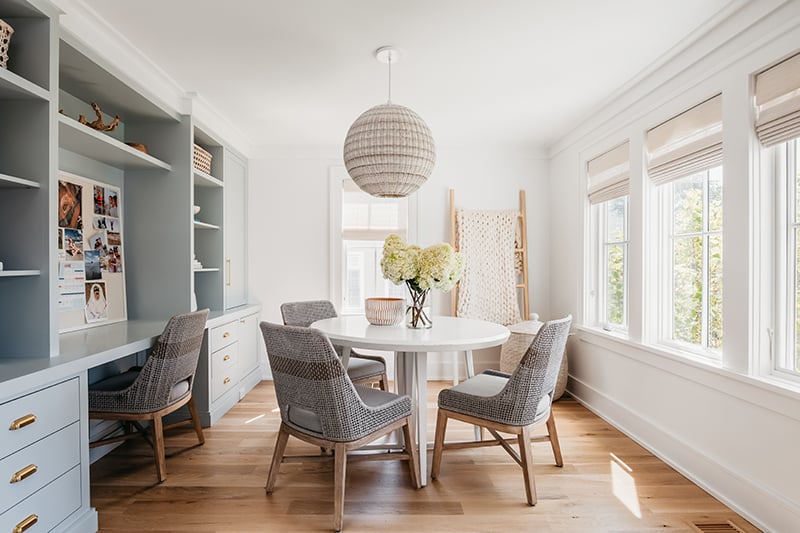 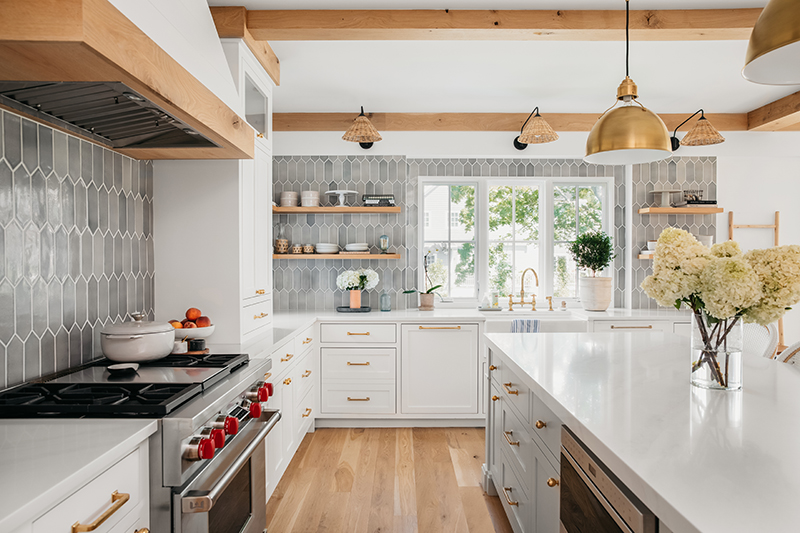 “When you’re working with a beachside property, it’s important to maximize views and bring as much natural light into the home as possible,” says Volpe. “We were able to do this by using a mix of Marvin products from their Elevate collection. With narrow stiles and rails, the Elevate casement and picture windows deliver large, uninterrupted expanses of glass. The Joys also selected an Elevate sliding patio door, which accesses the backyard without obstructing traffic and views.”

Liz loves having a window above her farmhouse kitchen sink that overlooks the backyard. There, she can keep an eye on the kids playing. As it is for many families, especially those with young children, the kitchen is where the Joys spend most of their time. At nine feet, the ceiling in the kitchen and family room is almost an inch and a half higher than those in the rest of the house. This extra height added spaciousness without having to reconfigure the walls. 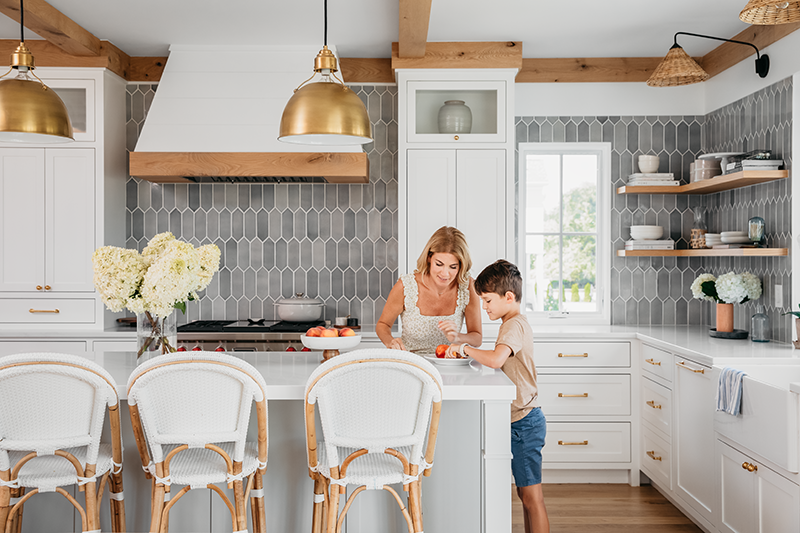 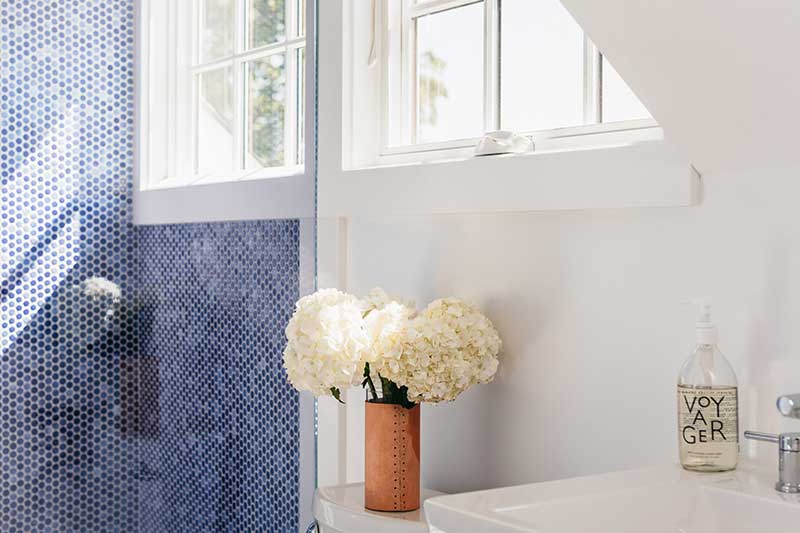 Custom inset cabinets with Shaker-style doors by A-Design by Artur have knobs of unlacquered brass that will age over time, taking on a rich patina. To contrast slightly with the crisp white walls, trim, and cabinets, the island is painted in Benjamin Moore’s “Sleigh Bells.” This calm blueish-green tone is picked up by the earthy, hand-painted picket tiles on the backsplash.

Although Liz loves the look of natural stone, in deference to her young children, she went with non-porous Valley Enigma quartz for the kitchen countertops. “It’s pretty much bulletproof,” she says, yet gives her the organic look she was after.

Even though their house sits on only 0.2 acres, there is room in the backyard for not only a pool but also for a vegetable patch and a petite gardening shed with a sign that reads “The Joy’nt.” In one of the bathrooms, “JOY” is tiled into the floor. Had she not married a guy with such an appropriate last name, would Pure Joy Home have come to be? “Yes,” insists Liz. “But it wouldn’t have been as catchy.” 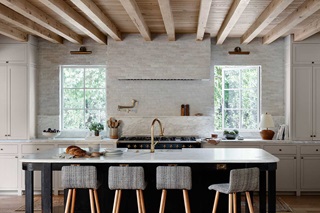 The modern farmhouse aesthetic is one of today’s popular design choices. But what is it, exactly? And if you choose this look for your home, how can you make sure your windows go with the overall modern farmhouse design? 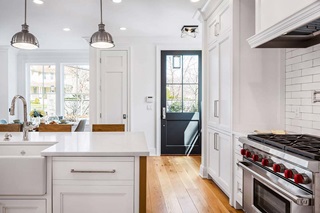 A light-filled residence is packed with modern farmhouse charm. 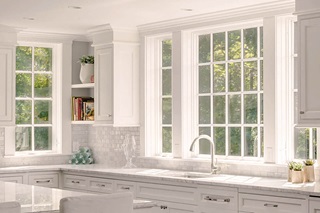 The Marvin Elevate® collection is an ideal blend of remarkable design and superior strength, bringing balance to your style and performance needs. 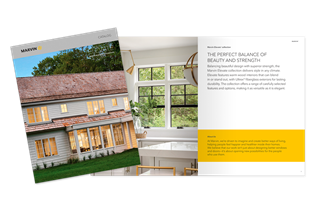 Get the Elevate Catalog

Get detailed information on the Elevate collection including types of windows and doors, color and finish options, sizing, hardware, and other key details.