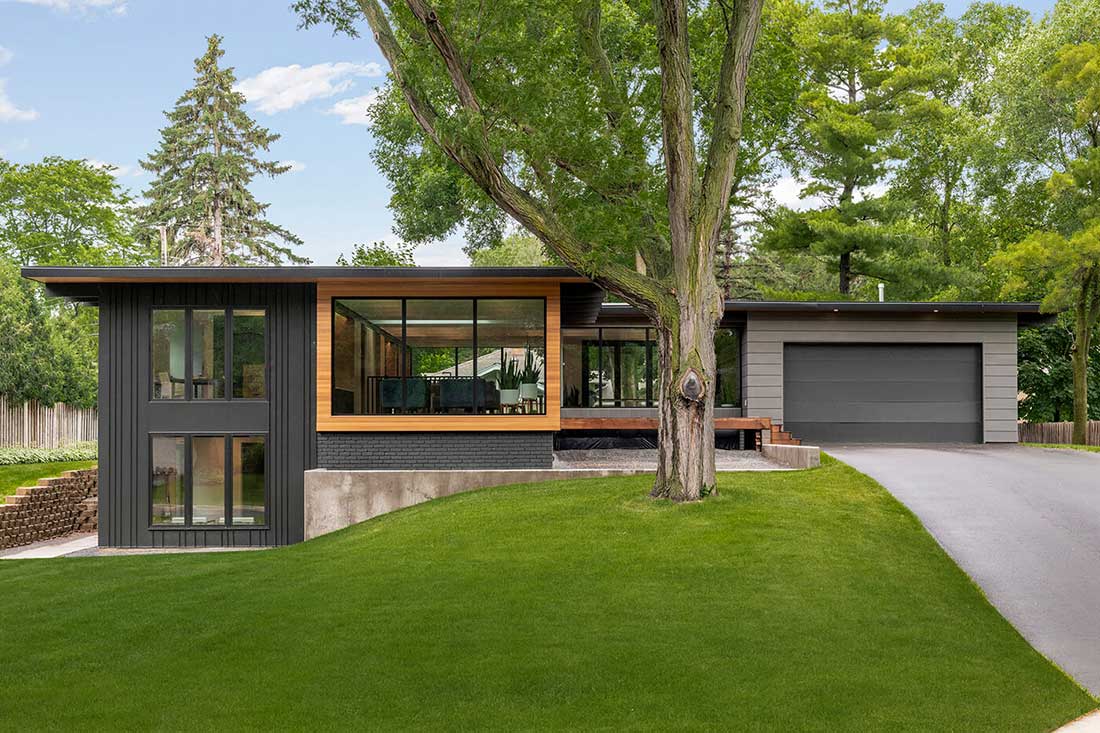 
Tony Videen has a passion for Mid-Century modern homes, which is why he started STR8 Modern, a company that specializes in helping homebuyers find, buy, and renovate their Mid-Century dream home. On this particular renovation project, the homebuyer was Videen himself. He has always appreciated the creative solutions generated by the back-and-forth communications with his clients, and he did not want to lose that valuable exchange, so he chose to team up with architect David Strand of Strand Design who has a long history of designing and building Modern and Mid-Century Modern homes. The result of the collaboration is this stunning Mid-Century gem. 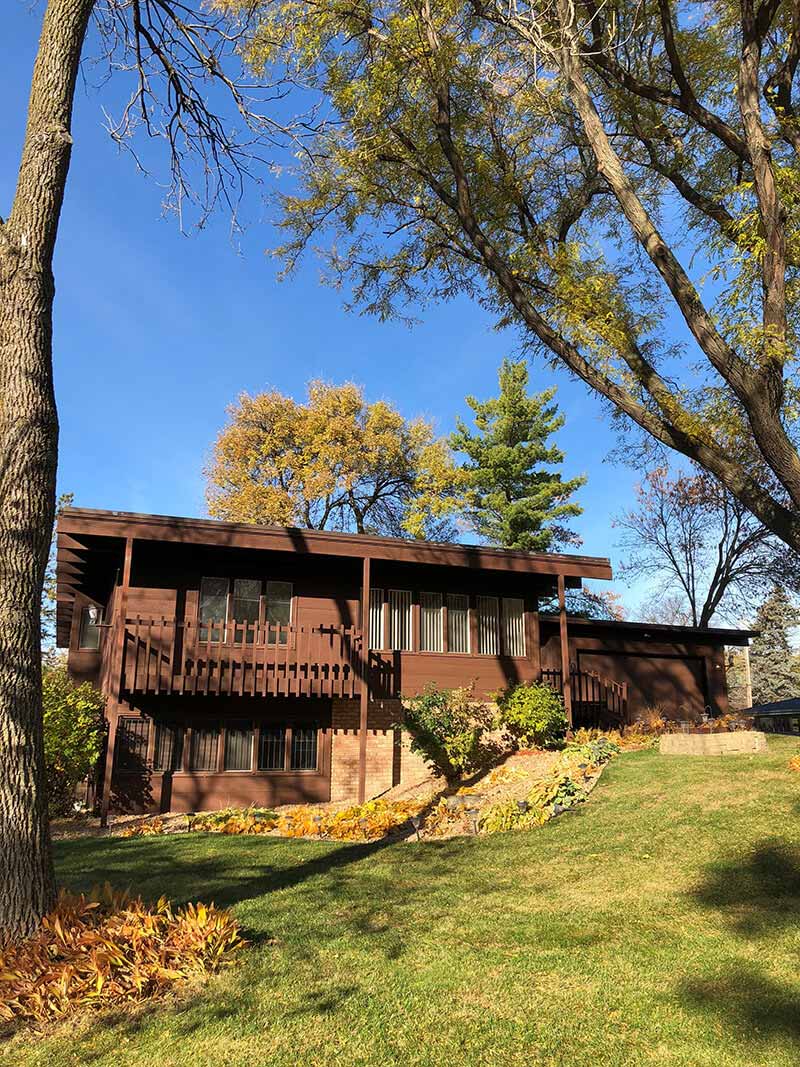 
The house was built in 1961 in Golden Valley, Minn., an inner ring suburban city known for its abundance of Mid-Century Modern homes. It had not undergone any significant renovations since it was built, and as soon as Videen saw it, he knew it was the one. “We remodeled the house across the street, and I instantly fell in love with it,” Videen explains. “I spoke with the homeowner who had lived in the home for 45 years. She appreciated the type of work we did and recognized my passion for this type of architecture. We eventually became friends. She did not want to see her home torn down and replaced with a massive house that did not complement the neighborhood, as was the fate of other properties in the area, so she agreed to let me know when she was ready to sell. Two years later I got the call.”


The structural changes to the home were extensive. The interior load-bearing wall that ran the length of the home was replaced with a steel beam, and the entire left elevation was bumped out to accommodate a larger kitchen without sacrificing space in the bedrooms. Yet, with all the improvements, it was important to Videen and Strand that the building mass maintain its original feel. 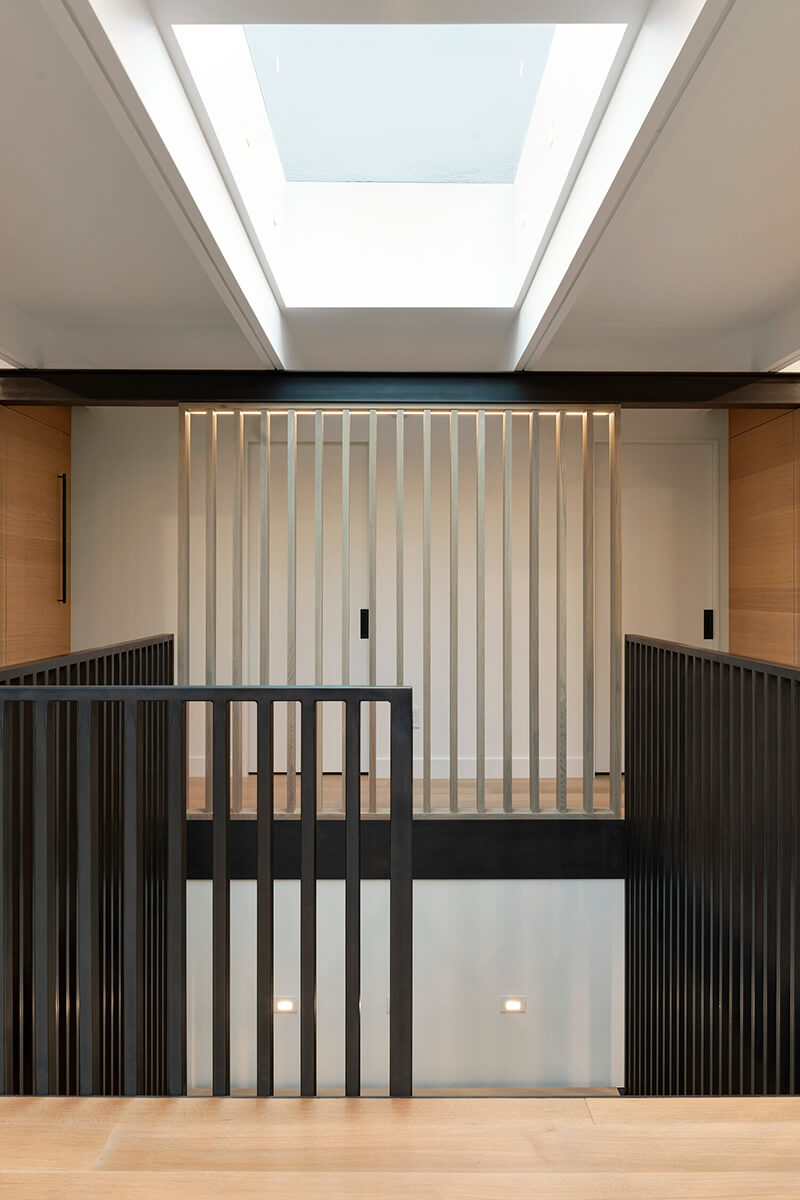 
Videen’s crew stripped the interior spaces down to the studs so he could start with a blank slate. “While the existing elements like the flat roof and exposed roof joists still give the building a Mid-Century feel, we wanted the interior to reflect a more Modern aesthetic,” Videen says. “The allure of this house to me was that the shell was in the Mid-Century style, but inside, there were no architectural details that a Mid-Century purist would consider a disgrace to tear out — those kinds of details just weren’t there.” 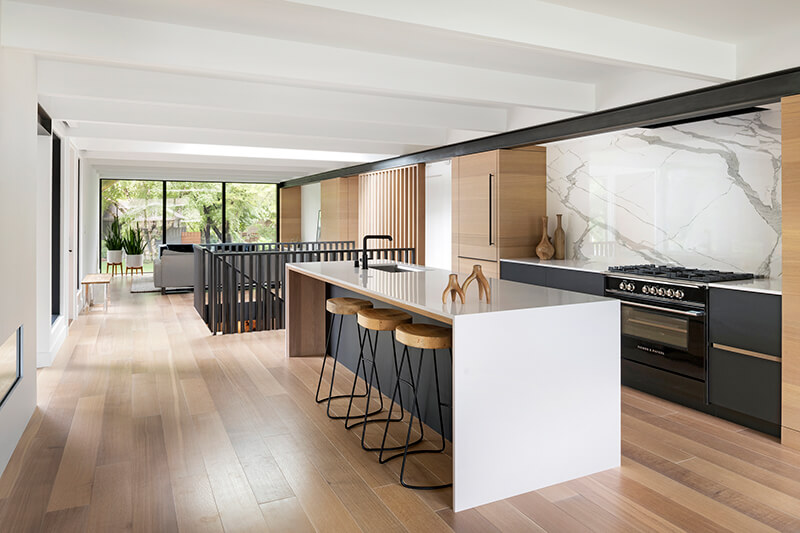 
The white walls and rift-cut white oak make a dramatic contrast to the dark finishes on the cabinets and railings. And while many of the diverging elements are designed to deliver a Modern visual punch, other materials are specifically designed to work in harmony. Architect Strand notes that, “The ebony finish on the floor-to-ceiling Marvin Signature™ Modern windows plays well with the steel railing, and the window frame actually seems to be part of the steel I-beam that draws your eye down the entire length of the long space.” 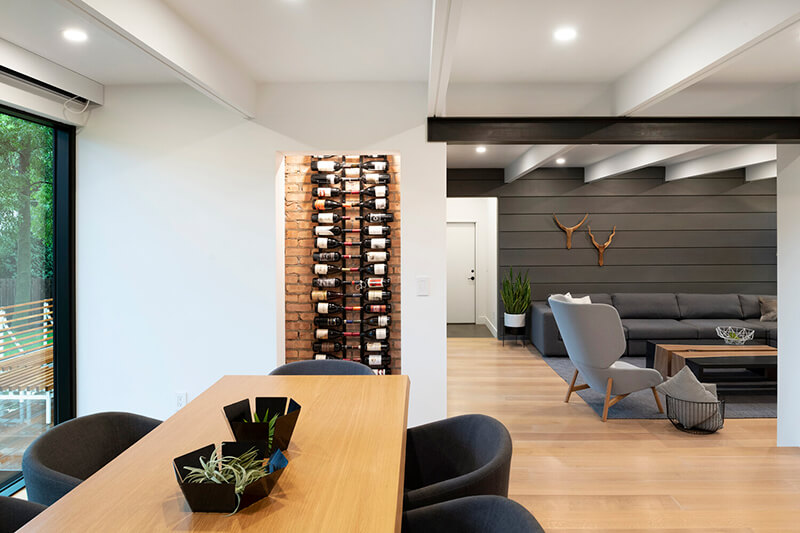 Attention to every unconventional detail


Traversing the whimsical bridge leading up to the front door suggests to visitors that they may be in for an unexpected treat. Inside, the floating nightstands, a brick wine closet, hidden doors, and exposed steel elements confirm that this home is anything but traditional. But it’s not just the types of features, colors, and unique materials that evoke a sensory response, it’s the thoughtful way they are all implemented and the meticulous fit and finish of every square inch of every space. “I appreciate all the unique elements in the home, but my favorite feature is the overabundance of detail work that actually went in to building those elements,” Videen says. “I have guests that have been here several times and still discover some new detail that they hadn’t noticed before.” 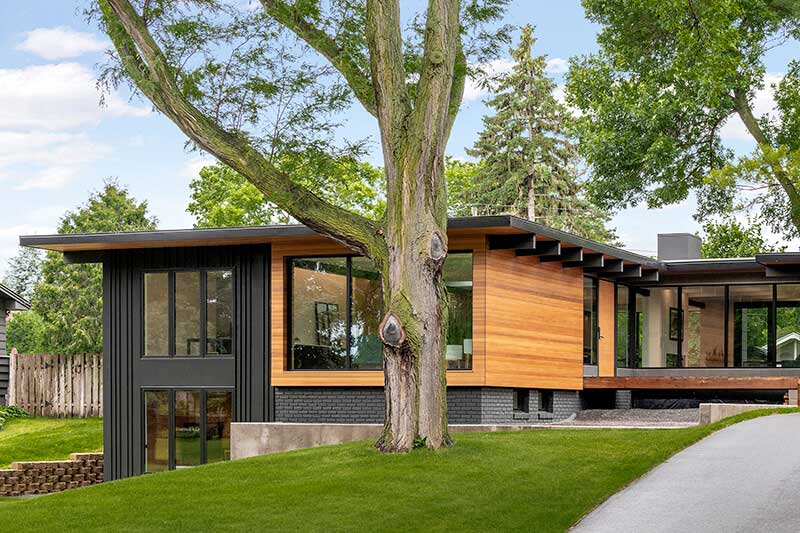 
The public rooms are open and feature floor-to-ceiling windows and large bi-fold doors that loosely demarcate indoor spaces from the outdoors. “For public spaces, I often call for large openings fitted with direct glazed windows with square sticking,” Strand says. “This combination delivers a crisp clean plane, narrow mulls, and maximizes the size of the glazing. But it’s not about creating the biggest opening size just to show off. It’s all about human scale and creating spaces that people are drawn to. And while sometimes that space may include large windows, in private rooms more separation from the street is okay.”


“I’m thrilled with the openness,” Videen adds. “All the large windows do have retractable shades for those rare occasions I’m needing a little privacy, but I’ve been living in a condo downtown that was like a giant fishbowl, so I feel right at home. I wanted the people driving by to be able to see all the way through the house, partly because it’s a showpiece for my business, but more importantly, to me it’s art.” 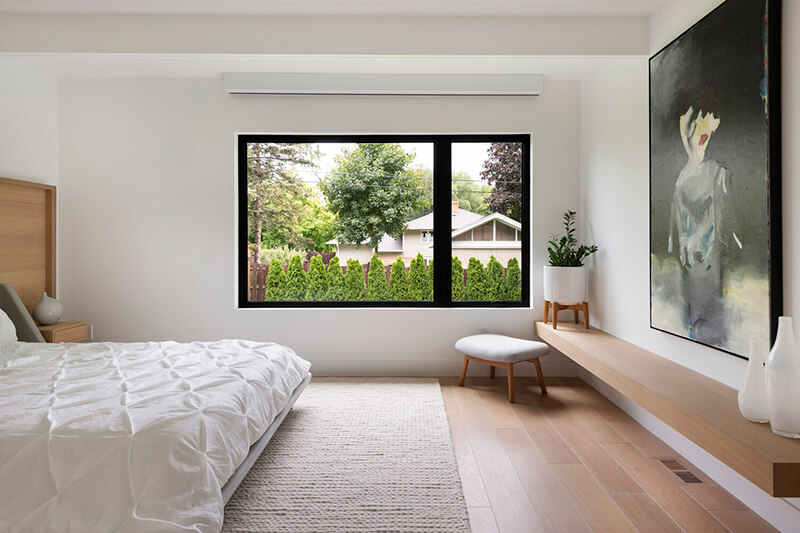 
When asked about working with Marvin windows, Videen said, “I live and work in Minnesota and try to incorporate building materials from Minnesota companies first. And that works out pretty well when we have a company like Marvin in the state. Not only are Marvin products the highest performing, we choose them because they offer the design flexibility to achieve the exact aesthetic we’re after, no matter how challenging the vision.”


Strand says, “We spec Marvin windows and doors into our homes because of the continuity across the collections allows us the freedom to value engineer when necessary, and to place the best functioning windows in the spaces where they make the most sense. We can install beautiful wood Marvin Signature™ Ultimate windows in public spaces and install an all fiberglass Marvin Essential window with the same finish and profiling details over a kitchen sink or even into a shower space.”